The most prominent morphologic features along the shoreline of the Carolinas are its four capes. From north to south, Cape Hatteras, Cape Lookout, Cape Fear, and Cape Romain segment the coastline into the northern outer banks, Raleigh Bay, Onslo Bay, and Long Bay regions. Continental shelf areas seaward of the capes are characterized by large, highly dynamic shoal complexes, which influence coastal circulation patterns and represent navigational hazards. These shoals contain a significant percentage of the total volume of sediment in the overall coastal system (including the barrier islands, subaerial capes, shoreface, and cape-associated shoals). The shoals are generally thought to be the major sink in the coastal sediment transport system. Understanding the formation of these capes and their effects on regional sediment transport is significant for management of our coastal waters. 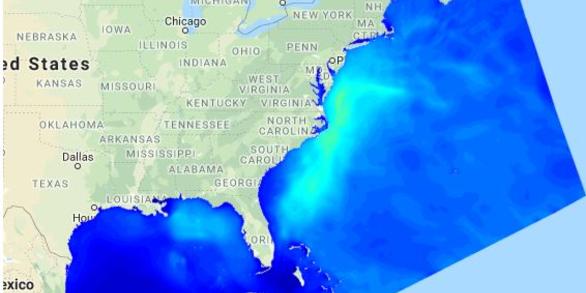 The primary objective of this project is to increase our understanding of the physical processes that cause coastal change, and ultimately improve our capability to predict the processes and their impacts. This will be approached by using geophysical 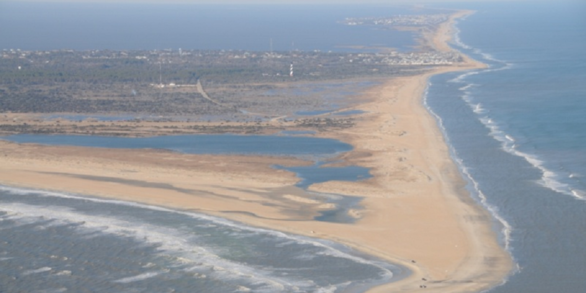 Diamond Shoals is a complex of sand shoals extending 40 km seaward from Cape Hatteras Point, North Carolina, and it is hypothesized that Diamond Shoals represents a major regional sink for sand derived from the coast to the north of Cape Hatteras. The existence of the shoal suggests that processes removing sand from the shoal are weaker than processes delivering sand to it and that there are processes acting to contain the sand in a coherent body rather than allowing it to become dispersed over the shelf. Despite the likely importance of Diamond Shoals in the regional sediment budget and the many unanswered questions about the formation and maintenance of Diamonds Shoals, there have been very few hydrodynamic measurements due to the extreme difficulty of deploying instruments in the area.

Geophysical surveys were conducted across Diamond Shoals offshore of Cape Hatteras in order to investigate the geologic framework of this sedimentary system and assess the extent to which the shoals may be composed of modern, mobile sediment.

Geophysical surveys were conducted over Diamond Shoals in FY2008. The study area includes approximately 330 km2 and extends from ~400 m seaward of the shoreline comprising the cape tip to 20 km offshore where the shoal terminates in approximately 40 m water depth. Sidescan sonar; single-beam and interferometric swath bathymetry; and 3.5 kHz, CHIRP, boomer, and water-gun subbottom profiling systems were used to map the morphology and stratigraphy of Diamond Shoals.

Analysis of the data has identified several interesting aspects. The main body of the shoal consists of a 7 km2 triangular central platform that extends 8 km SE from the cape tip. The top of the platform is at a depth of 2-5 m and mantled by symmetrical sand waves with crest directions that trend NW-SE. The sand waves have a wavelength of ~300 m, and amplitudes up to 4 m. The central platform is bounded by two large lobate ridges and swales in water depths of 10-20 m. The ridges are ~5 m high, 1.5 km wide, and are more pronounced on the northern side of the shoal. The ridges on the northern side of the shoal are covered by coarse sediment that appears to result from winnowing by currents. Sand waves similar to those on the central platform are superimposed on the ridges, but are asymmetrical and indicate northeastward-directed net sediment transport. Interpretation of high-resolution seismic data suggests that Diamond Shoals consists of Holocene sediment up to 8 m thick overlying a transgressive unconformity. We interpret the transgressive unconformity underlying the modern sand on Diamond Shoals as the Holocene ravinement unconformity. Sediments beneath this ravinement unconformity are presumably Pleistocene in age. Details of the interpretation are presented in Thieler and others, 2013.

An initial 2009 U.S. Geological Survey experiment focused on processes on the distal part of the shoal, with three instrumented tripods placed 10-20 km from Cape Hatteras Point to address the potential transport of sediment by wind-driven currents near the tip of Diamond Shoals. This experiment is described in detail and data available in our open file report Armstrong and others, 2011 ( http://pubs.usgs.gov/of/2011/1156/). The experiment was also a focus of our on-line journal at http://soundwaves.usgs.gov/2009/04/fieldwork3.html. Results identified that the Shoal greatly modified the currents and waves in the region. Local circulation and sediment fluxes were found to be offshore and convergent towards the shoal helping to maintain the feature.

A second field experiment was conducted in February 2010 to focus on the hydrodynamic processes along the coast where wave-driven flows are expected to drive the dominate sediment-transporting process. This experiment is described in detail and data available in our open file report Armstrong and others, 2012 (http://pubs.usgs.gov/of/2012/1219/). The experiment is also described in an online article at http://soundwaves.usgs.gov/2010/07/. Results from this study show the variation of wave, tidal, and wind driven flows at Cape Hatteras are steered by the coastal orientation. In the nearshore, the subtidal flow is aligned with the local coastline orientation while at the cape point the flow is along the existing submerged shoal, suggesting that cape associated shoals may act as an extension of the coastline. Further analysis is described in Kumar and others, 2013.