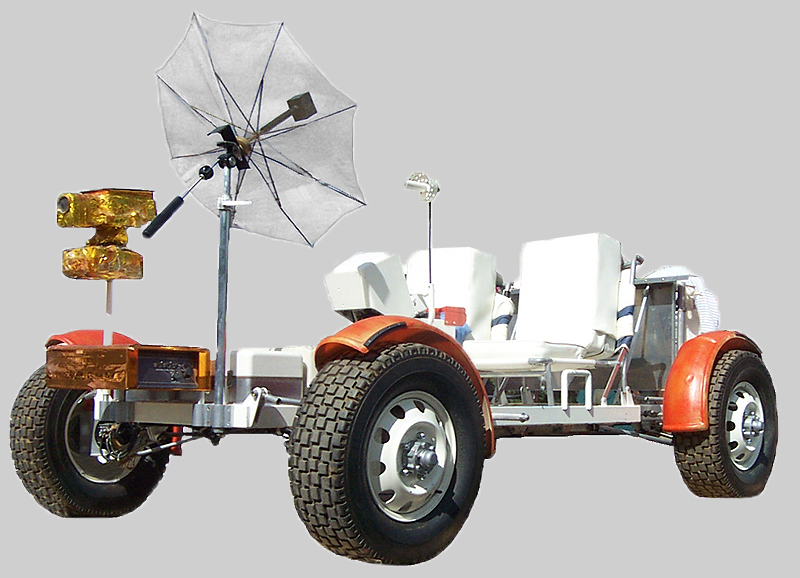 Grover was built in just four months in 1971 by the USGS Astrogeology Research Program (called the Branch of Astrogeology at the time) and used to training Apollo 15-17 astronauts at the Cinder Lakes training ground near Flagstaff, in California's Mojave Desert, and in the Rio Grande gorge near Taos, New Mexico, an area which resembled the moon's Hadley Rille, destination of Apollo 15. Driving practice was necessary for the astronauts because of the rover's unique propulsion system: it had a separate motor for each wheel

The trainer was built in Flagstaff by Rutledge Mills (equipment specialist) and mechanics William Tennin and Irving Wiser. Design and construction of Grover was carefully modeled after the actual Rover. Costs were kept down on the model by using a variety of new and used parts from Renault (R-8 steering gear), Volkswagon, Lear, Jeep (hubs by Willy's), Warn, General Motors (Oldsmobile Toronado wheels), Hughes Aircraft (B-26 bomber landing gears), Morris Minor and Yamaha. When parts were needed that the men couldn't find, they were handcrafted in the USGS shops in Flagstaff. Grover could not be identical to the ones which were used on the moon because these latter vehicles are actually quite fragile, built only to withstand the moon's one-sixth gravity: Grover weighs 800 pounds heavier than the LVRs that went to the moon. This vehicle was one of 10 lunar rovers built, including testing and training models.
Object ID: USGS-418682