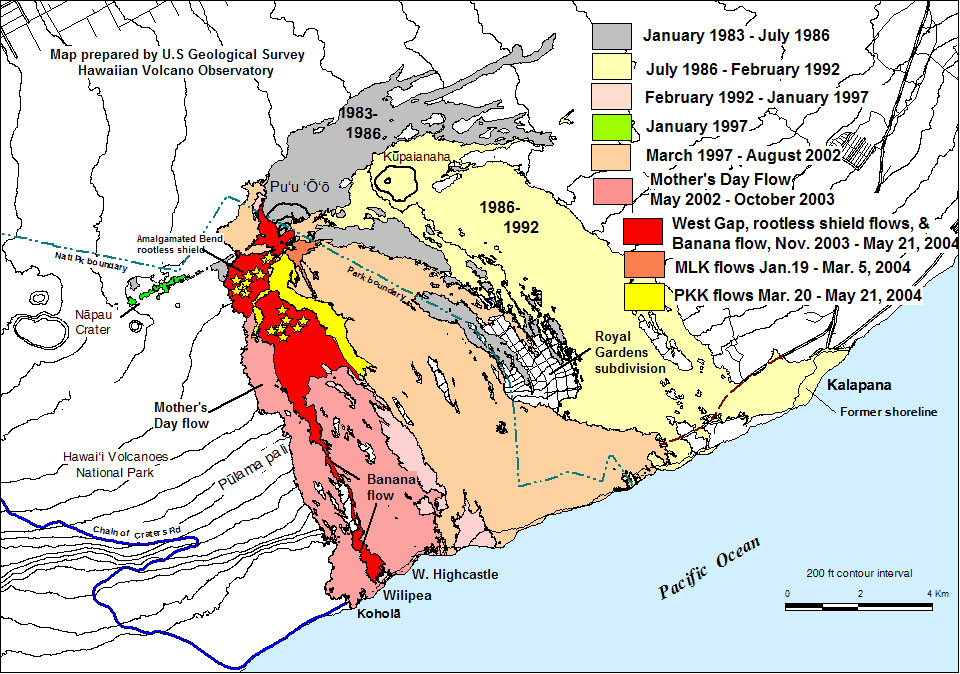 Shades of red denote Mother's Day flow, which began erupting on May 12, 2002 and continues to the present. Darkest shade indicates lava flows erupted in November 2003-21 May 2004, including the labeled Banana flow, which developed gradually starting in the middle of April. Yellow stars indicate centers of formerly active, but now dead, rootless shields built along lava tube in Mother's Day flow. Yellow shade indicates Kuhio (Prince Kuhio Kalaniana`ole) flow, active most of the time from March 20 to May 21. As of May 21, most activity was located south of the rootless shield complex in the Banana flow, fed by the Banana branch of the Mother's Day tube. The Kuhio flow remains active, too.

In early October 2003, the August 9 breakout stopped moving, the Kohola died back to a trickle, and the one labeled rootless shield gained prominence. By October 16, however, the shield had partly collapsed, leaving several drained perched ponds behind. Upstream from the shield, many hornitos and small flows formed over the Mother's Day tube. Soon thereafter, other rootless shields began to form over the Mother's Day, August 9, and Kohola tubes.

New vents opened at the southern base of Pu`u `O`o on January 19 and fed Martin Luther King (MLK) flows, which remained active until March 5. Several small vents formed during this time. On March 20, Prince Kuhio Kalaniana`ole (PKK) flow originated from two vents, main one about 250 m south of base of Pu`u `O`o. This flow has remained active most of the time to the May 21 date of this map.

The Banana flow developed from breakouts from the Mother's Day lava tube, centered near the former Banana Tree kipuka. The breakouts become prominent in the middle of April, and lava started down Pulama pali shortly thereafter. This is the time that we assigned the name Banana to the flow.

Vents in West Gap Pit became active in early October, were quiet for 3 weeks, and then resumed intermittent activity that continued well into December. Other vents were also sporadically active in Puka Nui (near West Gap Pit) and in the crater of Pu`u `O`o.