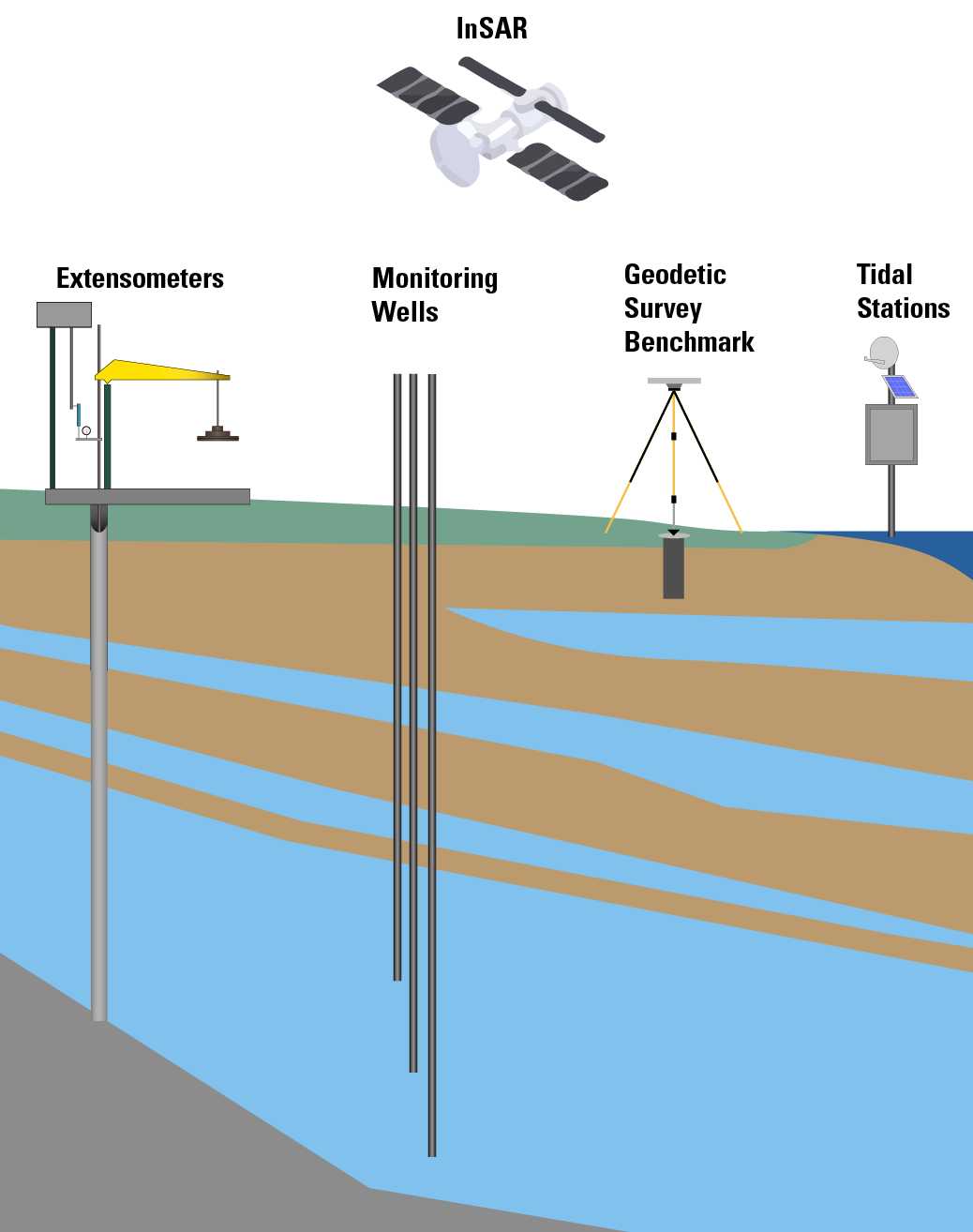 When it comes to measuring land subsidence, sea level rise, and shoreline retreat, the USGS uses a variety of methods, each with their own strengths and drawbacks.

Borehole extensometers measure the expansion or compaction of an aquifer system. These measurements are independent from other vertical land movements that might occur deeper in the earth's crust, such as tectonics or glacial isostacy. Extensometers record changes in the distance between the land surface and the bedrock at the bottom of the monitored aquifer. Extensometers are one of the most accurate instruments for measuring aquifer compaction, but they can only measure compaction at a single location. In addition, drilling and installing new extensometers can be a large undertaking. Extensometers are most useful in locations where very precise and accurate measurements are needed, such as subsidence hotspots, and can be used to calibrate and check the accuracy of other forms of land subsidence monitoring.

Groundwater Monitoring Wells measure the water level in unconfined aquifers, and the potentiometric surface in confined aquifers. Confined aquifers that are over-exploited and which have low water pressure are vulnerable to aquifer compaction, which can lead to subsidence. While groundwater monitoring alone can't tell us anything about land motion, it is important to identify areas with high groundwater drawdown rates so that they can be monitored for subsidence. In addition, when groundwater levels are monitored in conjunction with other forms of subsidence monitoring such as extensometers, researchers can gather more information about whether or not aquifer compaction is a major factor.

InSAR uses radar to measure land elevation over a large area. By comparing the elevation recorded by an InSAR satellite at two different times, we can determine how much the land surface moved. InSAR has limitations. Dense vegetation and high humidity can scatter radar signals, decreasing data accuracy, so InSAR is best used in dry environments that are free of vegetation.

Geodetic Surveying is the measurement of land surface location and elevation using optical leveling equipment and/or GPS. Highly accurate Global Positioning System (GPS) tripods measure elevation across and record data over the course of many days during a survey to ensure maximum accuracy. By surveying the same benchmarks year after year, scientists can track changes in surface elevation as an area subsides. Geodetic benchmark surveying has some drawbacks. Unlike extensometers, geodetic surveys cannot distinguish between aquifer compaction and other drivers of subsidence. They also do not typically produce a continuous record, but instead a measurement for a single point in time. However, these surveys can measure a much larger area than extensometers alone and are crucial to gaining an accurate understanding of how land surface is moving across the entirety of a region.