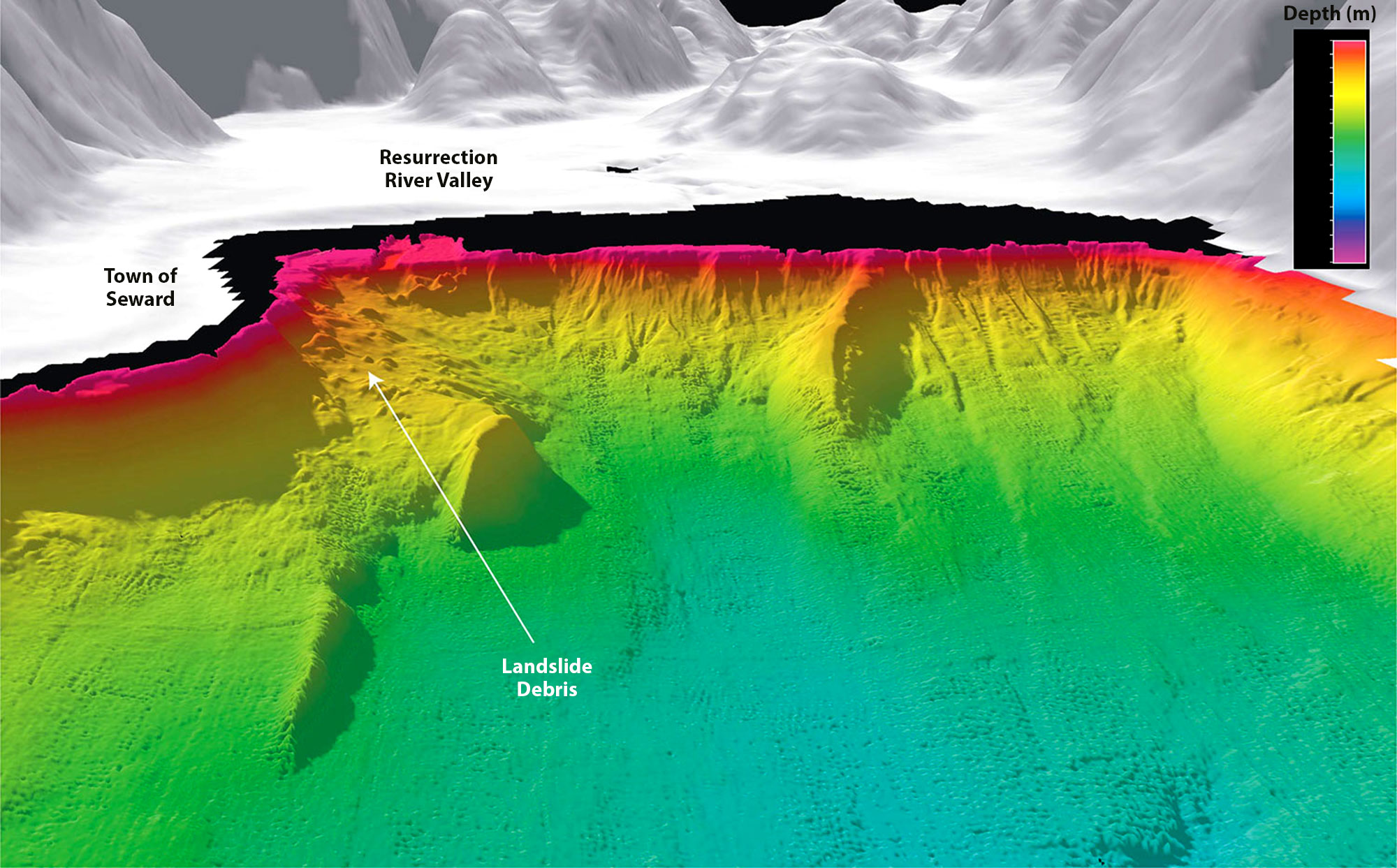 Sonar-generated image showing underwater topography and the potential for landslides near the head of Resurrection Bay, Alaska. The terrain looks three times as steep as it occurs naturally. The arrow points to underwater landslide debris from the collapse of a fan-delta following the great Alaskan earthquake of 1964. The town of Seward, which suffered much damage and lost lives due to the quake, had been built on this fan-delta (just above and to the left of the arrow).

Characteristics of Several Tsunamigenic Submarine Landslides
Journal article, 2003: Submarine landslides are becoming recognized as a potential source of damaging local tsunamis. However, there are presently few documented case studies of landslide events that have caused historic tsunamis or likely caused prehistoric tsunamis. We present three case studies of submarine landslide environments off the west coast of the United States, including Alaska. Each environment has been imaged using multibeam technology allowing excellent resolution of the morphology of the seafloor. Based on this imagery and the historic record, we document the character of these environments and the resulting tsunamis. In the case of one of the failures, we present a model of the motion of the landslide and the size of tsunami that this motion would have produced.

Undersea landslides: extent and significance in the Pacific Ocean, an update
Journal article, 2005: Submarine landslides are known to occur disproportionately in a limited number of environments including fjords, deltas, canyons, volcanic islands and the open continental slope. An evaluation of the progress that has been made in understanding Pacific Ocean submarine landslides over the last 15 years shows that mapping technologies have improved greatly, allowing a better interpretation of landslide features. Some features previously identified as landslides are being reinterpreted by some as sediment waves. Previously underappreciated environments for landslides such as deep-sea trenches are being recognized and lava deltas are being found to be landslide prone. Landslides are also being recognized much more commonly as a potential source of tsunamis. Landslides that have produced tsunamis in the past are being mapped and in some cases modeled. The flow characteristics of turbidity currents produced by landslides in canyon heads have recently been monitored and the source of these failures has been identified using repeated multibeam mapping. Finally, some landslide deposits are being dated as part of assessing risk to coastal cities from landslide-tsunamis.