The NHDPlus HR is a geospatial dataset depicting the flow of water across the Nation's landscapes and through the stream network. The NHDPlus HR is built using the National Hydrography Dataset High Resolution data at 1:24,000 scale or more detailed, the 10 meter 3D Elevation Program data, and the nationally complete Watershed Boundary Dataset.

Check out the NHDPlus HR factsheet 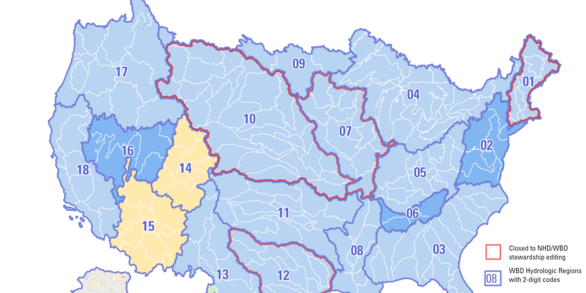 The NHDPlus High Resolution (NHDPlus HR) has been produced for the conterminous U.S., Hawaii, several U.S. territories including Puerto Rico, Guam, and American Samoa. An updated version of the NHDPlus HR in these areas is underway. Please see the NHDPlus HR Versioning section below for more information.

NHDPlus HR is currently in production in Alaska as a part of a longer term project to update the National Hydrography Dataset (NHD) and Watershed Boundary Dataset (WBD). Some areas in Alaska are currently available, with estimated completion around 2030.

►Check out the NHDPlus HR factsheet!

The NHDPlus HR framework connects the hydrologic network seamlessly across the terrain by including not only streams, but also associated catchment areas that drain to each stream segment. This association allows information about the landscape to be related to the stream network. Using tools such as the Hydrography Event Management (HEM) tool, observational data on the stream network, such as water quality samples, streamgage measurements, or fish distribution, can be linked to the framework.

Together, the framework and linked data can support a limitless range and type of applications, for example:

NHDPlus HR consists of vector and raster data layers. It includes a snapshot of the NHD and WBD at the time the NHDPlus HR was built, as well as the following components:

NHDPlus HR is modeled after the highly successful medium resolution NHDPlus Version 2. However, users will find that the NHDPlus HR, which increases the number of flowline features nationally from about three million in the NHDPlus Version 2 to around 27 million, provides richer, more current content that also can be used at a variety of scales.

The NHDPlus HR provides a common geospatial framework that is open and accessible for use by everyone, including government, citizens, and industry. It is designed to support the National Hydrography Infrastructure and Internet of Water. NHDPlus HR will not only provide far more detail than NHDPlus V2 in order to support local analysis and modeling, special attributes also allow the selection of more generalized stream networks for regional or national analysis, while retaining the spatial accuracy of the highest-resolution, nationally available datasets.

The VisibilityFilter attribute enables users to represent NHD vector features in the NHDPlus HR at eight different map scales. Using an algorithm, each feature is assigned a VisibilityFilter value, indicating the approximate appropriate map scale, and all larger scales, for representing the features. This attribute is available for the NHDFlowline, NHDWaterbody, NHDArea, and NHDLine feature classes. Details on methods for using the VisbilityFilter attribute, information on known issues, and citations for determining the map scale levels are available on the Scale Representation using the VisibilityFilter Attribute page.

►Please note: The VisibilityFeature attribute will only be available for CONUS (not Alaska, Hawaii, or the U.S. Territories) due to limitations of datasets needed to calculate the attribute. It has been populated in the National Hydrography Dataset for most of CONUS, with the exception of a few hydrologic units in Region 02 and 08. The VisibilityFilter attribute will be incorporated into the NHDPlus HR as the datasets are updated to the next version after Beta.

There are several places to learn more, including

The NHDPlus HR is very similar to the medium resolution NHDPlus Version 2, for which a great deal of documentation is available from the EPA. See the “Learn More” tab on the US EPA NHDPlus website for documentation, training presentations, and exercises. Also, a series of video presentations from a July 2016 workshop on NHDPlus Version 2 is available from the California Department of Water Resources.

NHDPlus HR datasets are produced and made available for download by 4-digit hydrologic unit (HU4) and by 8-digit hydrologic unit (HU8) for Alaska. Once a year, the USGS will release a numbered national snapshot of datasets called the NHDPlus HR National Release. The NHDPlus HR National Release will includes all of the most current data for each HU4 (HU8 in Alaska) in one dataset, and will have a Digital Object Identifier (DOI) to support persistent referencing of the dataset in scientific research and other applications.

An initial production of NHDPlus High Resolution (NHDPlus HR) data is available for the conterminous U.S., Hawaii, several U.S. territories including Puerto Rico, Guam, and American Samoa. Dataset production to update NHDPlus HR products for each HU4 in these areas is underway. It is expected that over the next few years, each HU4 in conterminous U.S., Hawaii, and U.S. territories with initial NHDPlus HR dataset production will undergo one production update. During that time, an NHDPlus HR National Release will be distributed with the most up-to-date data available at the time it is created.

NHDPlus HR is currently in production in Alaska as a part of a longer term project to update the National Hydrography Dataset (NHD) and Watershed Boundary Dataset (WBD) for the entire state. NHDPlus HR datasets are currently available for some areas in Alaska, with estimated completion for the project expected around 2030.

If you discover an issue with the NHDPlus HR, please contact nhd@usgs.gov.