In the land of Kamehameha, south of Kona on the big island of Hawaii, a sacred landscape called Puʻuhonua O Hōnaunau faces the uncertainty of the rising seas.

The bones of royal chiefs rest there. Stories of how ancient Hawaiian lawbreakers flocked to this place of refuge still resonate throughout the 180-acre national historic park that surrounds Hōnaunau Bay.

EROS staffers Jeff Danielson, Dean Gesch, and Jeff Irwin, along with their CoNED colleague Monica Palaseanu-Lovejoy, are collecting high-resolution coastal elevation data for an integrated 1-meter topobathymetric digital elevation model (TBDEM). Once that seamless TBDEM is in hand, they will model potential inundation scenarios for the historical site—something they’ve been asked to do as well for the national historical park that includes the Pearl Harbor Memorial on Oahu.

“The National Park Service obviously is interested in what sea level rise and potential inundation might do to these areas,” said Gesch, a research physical scientist at EROS. “There’s a real concern about what the future might hold for these really valuable natural and cultural resources.”

The U.S. Army Corps of Engineers already mapped elevation for the coastal shelf beneath the water along the shoreline of PUHO six years ago, Danielson said. Now, he and his CoNED colleagues will use standard GPS (Global Positioning System) to collect multiple ground points. They’ll use ground-based lidar (light detection and ranging) to produce detailed high-resolution, three-dimensional (3D) point clouds of structures on the ground. And colleagues from the USGS Unmanned Aircraft Systems (UAS) project office in Denver are bringing drone-based lidar, a technology CoNED has never used before. The Denver contingent is bringing drones with cameras to acquire 3D structure-from-motion point cloud data as well to map bare-earth elevations, and adjacent buildings and structural areas.

It’s a first for CoNED, bringing all these technologies together to map coastal elevation, said Danielson, who noted that they “were really anxious to see what we get with this combination.”

Part of their work includes mapping numerous significant cultural features. One such feature is called “Pu‘uhonua,” or sanctuary. Until the early 19th century, Hawaiians who broke a “kapu”—or one of the ancient laws—could avoid certain death by fleeing to this place of refuge.

The team will also map the Great Wall, a massive L-shaped structure that stands nearly 12 feet tall, 18 feet in width, and stretches for 965 feet in length. The centuries-old wall was built for the protection of the sanctuary, the ceremonial sites, and the people living there.

Along with the mapping, colleagues from the University of Hawaii are putting out sensors and other devices to measure the wave climate in the waters offshore. That data combined with the earlier Army Corps of Engineers work and the collections out of this field work will all go into building a high resolution, high accuracy TBDEM that can then be used to model inundation scenarios.

“You always need these DEMs when you’re looking at what seemingly are small amounts of sea level rise,” Gesch said. “Those can still be very damaging. In most cases, it’s not the sea level rise itself; it’s what happens on top of it. When you basically raise the platform, the waves are going to be that much higher.”

CoNED’s work in gathering the data, building the TBDEM, and creating inundation models will allow decision makers for the park to better understand what is most vulnerable under certain scenarios, “whether that’s a certain storm, or a certain level of sea level rise, or a certain wave event,” Gesch said. “They can make their decisions based on those scenarios.”

The project, a collaboration of CoNED and the University of Hawaii, is being funded through the Department of Interior’s Pacific Islands Climate Adaption Science Center. Physical oceanographer Phil Thompson, a professor at the University of Hawaii, is the Principal Investigator for the project and will use CoNED’s TBDEM and inundation modeling when he puts together the decision-support products for the National Park Service, Danielson said.

CoNED is going to get something out of all this, too. Danielson said the use of drone lidar and drone-based structure-from-motion photography will allow them to compare the utility of both for a research paper they plan to do.

In the companion project at the Pearl Harbor National Memorial site, Thompson and his team are collecting elevation validation points to test the accuracy of a TBDEM that CoNED built for all of Oahu several years ago. That will lead to inundation modeling for the Pearl Harbor site as well. Though the two projects are being done for these specific cultural and historical sites, the work ultimately could prove useful well beyond Hawaii, Gesch said.

“I definitely see that the techniques and methods we’ll be using should be applicable to other projects,” he said. 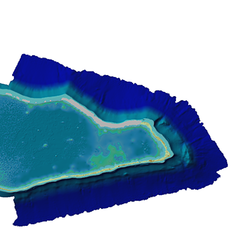 With sea levels rising and storms increasingly threatening their shorelines and cliffs, officials in Southern California face some difficult decisions...

University of Hawaii Geology and Geophysics Professor Chip Fletcher spread his maps on the table as land planners from Majuro—a large coral atoll of...

An old economics axiom holds that a rising tide lifts all boats. That may be, but a Sea Level Rise Viewer that has used elevation provided by the USGS...