Scientists found that naturally occurring arsenic in aquifer sediments was mobilized into groundwater and attenuated through reattachment to sediments within an underground petroleum plume. Understanding these patterns identifies anthropogenic factors that affect arsenic presence and magnitude in groundwater.

Arsenic naturally occurs in sediments and rock and can dissolve into groundwater within alluvial aquifers under geochemical conditions that favor its release. Scientists from the U.S. Geological Survey (USGS) and Virginia Polytechnic Institute are studying the controls on arsenic mobilization from aquifer sediments into groundwater. They have determined through previous studies that the accidental or intentional introduction of organic carbon such as petroleum, ethanol, and wastewater to an aquifer can generate iron-reducing conditions that can result in mobilization of arsenic.

In this current study, scientists were able to build on a previous understanding of arsenic mobilization in a crude-oil contaminated aquifer at the National Crude Oil Spill Fate and Natural Attenuation Research Site near Bemidji, Minnesota. Groundwater and sediment cores were collected in different areas along the petroleum hydrocarbon plume and analyzed for dissolved and solid phases of iron and arsenic, respectively. Archived sediment samples collected in 1993 were also analyzed for iron and arsenic to investigate changes in the aquifer's ability to attenuate dissolved arsenic as the plume evolved.

The study provides detailed and quantitative descriptions of iron and arsenic cycling in an aquifer with a persistent point source of organic carbon from a petroleum spill. Calculations indicate that at least 78 percent of the original arsenic in sediment near the plume was mobilized into groundwater during the 35-year lifespan of the plume. The calculations also indicate that only a small percentage of arsenic (about 0.5 percent) remains in groundwater within the plume due to resorption onto sediment (natural attenuation) just beyond the leading edge of the plume where arsenic reattaches to aquifer sediments. Arsenic attached to sediments in this zone is not permanently stored and can be remobilized as the hydrocarbon plume progresses down gradient; therefore, current arsenic "sinks" can serve as future arsenic sources as the plume migrates.

This study is part of a long-term goal to understand and distinguish perceived, as compared to actual, risks of contaminant exposures that arise during energy resource activities including transportation, storage, extraction and waste management. Once mobilized, naturally occurring elements such as arsenic can pose an additional and potentially greater exposure risk than the hydrocarbons that were unintentionally released to the environment. According to the Center for Disease Control, long-term exposure to arsenic can potentially cause a variety of health problems including nausea, vomiting, high blood pressure, and cancers. About 140 million people—almost one-half of the Nation's population—rely on groundwater for drinking water. Logical next steps include applying the understanding gained at the long-term field site to identify areas where groundwater used as a drinking water source may be in the path of contaminant plumes and pose a human-health risk.

This research was supported by the USGS Toxic Substances Hydrology Program and National Research Program. It was also supported by the National Crude Oil Spill Fate and Natural Attenuation Research Site, which is a collaborative venture of the USGS, the Enbridge Energy Limited Partnership, the Minnesota Pollution Control Agency, and Beltrami County, Minnesota; the Virginia Water Resources Research Center; American Association of Petroleum Geologists; and the Geological Society of America. 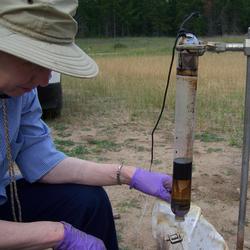 Scientists found that naturally occurring arsenic in aquifer sediments was mobilized into groundwater and attenuated through reattachment to sediments within an underground petroleum plume. Understanding these patterns identifies anthropogenic factors that affect arsenic presence and magnitude in groundwater.
Learn More