Home for the Holidays: Follow One Mule Deer’s 242-Mile Journey Across the Changing American West

As the shortest day of the year arrives, many of us are traveling home for the holidays. Many migratory deer around the West are just arriving at their winter ranges, where they take shelter from the snowstorms the coming months will bring.

A new geonarrative, based on USGS research, paints a picture of one mule deer’s impressive journey as she travels from her summer range to her winter range.

For many animals, migration helps them make the most of summer and reduce the stress of winter. While geese and other birds make their seasonal journeys by air travel, other animals, like the mule deer of western Wyoming, travel long distances on foot. Not all mule deer migrate, but the vast majority that do follow an annual cycle tied to spring green-up of plants and snowfall. In the spring, the deer leave their winter range and follow the green-up up, eating the most nutrient- and protein-dense plants (scientists call this “surfing the green wave”) until they reach their high-elevation summer range. When cooler weather arrives in the fall, they travel back to their winter range where there is less snow to wait out the winter. Some mule deer only travel short distances, moving from low to high elevations in the same region, while others travel a hundred miles or more.

The longest point-to-point mule deer migration on record is the journey of Deer 255, which stretches from the Greater Yellowstone Ecosystem in the northwest corner of Wyoming to southern Wyoming’s Red Desert — a ~480-mile round trip. That’s the longest documented land migration in the lower 48 states, and second only to caribou in North America.

In the spring of 2016, Deer 255 was fitted with a GPS collar in the Red Desert, allowing researchers at the Wyoming Cooperative Fish and Wildlife Research Unit and partners at the Wyoming Game and Fish Department and Wyoming Migration Initiative to track her record-breaking spring journey across the Teton Range. Her GPS collar malfunctioned before she made the trip home, leaving the researchers to wonder whether the long trip was a fluke. But in 2018, Deer 255 was found and captured again and fitted with a new GPS collar, and she has repeated the 242-mile journey and shorter variations in the years since.

Traveling hundreds of miles from the mountains to the desert each winter, Deer 255 and her herd pass through a patchwork quilt of land comprising national parks, ranchlands, developed areas, and more. The barriers the deer cross are both physical and jurisdictional, ancient and brand-new, from the craggy mountain ranges of the Grand Tetons, and long, narrow glacial lakes to the fences and highways that cut Wyoming’s lands into private and public parcels. Protecting an animal that migrates long distances is a challenge that won’t fit within the bounds of a single protected area like a national park.

The story of Deer 255’s journey paints a picture of the modern West—diverse habitats managed by many hands, rapidly changing in the face of a growing human footprint and climate change.  By tracking mule deer like 255 and her herd, researchers learn not only where they go and how long it takes, but also how the changing landscape can influence migratory behaviors. Mapping these migrations can inform management decisions, such as the planning of housing and energy development. For example, the researchers tracking Deer 255 were able to identify a critical bottleneck in the migration corridor that bisected a parcel of land slated for a new housing development. This sparked a $2.1 million conservation effort to protect the bottleneck and ensure safe passage of migrating deer.

Mule deer that migrate shorter distances can provide plenty of useful information too—following 14 years of tracking a population in south-central Wyoming, the researchers were able to see that these deer slowed down when they encountered natural gas projects, throwing off their ability to “surf the green wave.”

A new geonarrative follows Deer 255’s fall migration route from end to end, taking the reader through each leg of the trip and the different places she passes through. The geonarrative was developed for inclusion in the Conservation Atlas that the USGS is creating for President Biden’s America the Beautiful initiative, a vision for how the U.S. can work collaboratively to achieve a locally led, nationwide conservation goal of conserving 30 percent of U.S. lands and waters by 2030. The Atlas will be a visual, interactive way to tell the story of conservation, restoration, and stewardship of nature in America and track progress towards conservation goals. Geonarratives like that of Deer 255 will be a part of the Atlas, providing users with a deeper storytelling perspective on the Nation’s natural resources.

Check out the new geonarrative to learn more about Deer 255 and the power of migration maps: 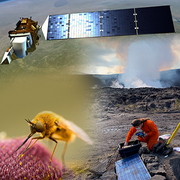 This is the data archive for the publication Ungulate Migrations of the Western United States, Volume 2 (Kauffman et al. 2022) and includes the collection of GIS map files that are mapped and described in the report. These map files are meant to provide a common spatial representation of the mapped migrations. This data release provides the means for ungulate migrations to be mapped and planned fo
By
Ecosystems, Cooperative Research Units
November 10, 2020

This is the data archive for the publication Ungulate Migrations of the Western United States, Volume 1 (Kauffman et al. 2020) and includes the collection of GIS map files that are mapped and described in the report. These map files are meant to provide a common spatial representation of the mapped migrations. This data release provides the means for ungulate migrations to be mapped and planned fo
By
Cooperative Research Units
December 15, 2022

Ungulates (hooved mammals) have a broad distribution across the western United States and play an important role in maintaining predator-prey dynamics, affecting vegetation communities, and providing economic benefits to regional communities through tourism and hunting. Throughout the diverse landscapes they occupy, many ungulate populations undertake seasonal migrations to exploit spatially and t
By
Cooperative Research Units
April 7, 2022

Migration is widespread across taxonomic groups and increasingly recognized as fundamental to maintaining abundant wildlife populations and communities. Many ungulate herds migrate across the western United States to access food and avoid harsh environmental conditions. With the advent of global positioning system (GPS) collars, researchers can describe and map the year-round movements of ungulate
By
Cooperative Research Units
May 7, 2021

Mapping out a future for ungulate migrations

Migration of ungulates (hooved mammals) is a fundamental ecological process that promotes abundant herds, whose effects cascade up and down terrestrial food webs. Migratory ungulates provide the prey base that maintains large carnivore and scavenger populations and underpins terrestrial biodiversity (fig. S1). When ungulates move in large aggregations, their hooves, feces, and urine create conditi
By
Cooperative Research Units
November 12, 2020

Across the western United States, many ungulate herds must migrate seasonally to access resources and avoid harsh winter conditions. Because these migration paths cover vast landscapes (in other words migration distances up to 150 miles [241 kilometers]), they are increasingly threatened by roads, fencing, subdivisions, and other development. Over the last decade, many new tracking studies have be
By
Ecosystems
June 11, 2020

To increase resource gain, many herbivores pace their migration with the flush of nutritious plant green-up that progresses across the landscape (termed “green-wave surfing”). Despite concerns about the effects of climate change on migratory species and the critical role of plant phenology in mediating the ability of ungulates to surf, little is known about how drought shapes the green wave and in
By
Cooperative Research Units
December 9, 2019

LARAMIE, Wyo.—The USGS, in partnership with state and Tribal wildlife agencies, today published the third volume in a series of new maps of big game...