New USGS maps identify potential ground-shaking hazards in 2017 from both human-induced and natural earthquakes in the central and eastern U.S.

New USGS maps identify potential ground-shaking hazards in 2017 from both human-induced and natural earthquakes in the central and eastern U.S., known as the CEUS. This is the second consecutive  year both types of hazards are forecasted, as previous USGS maps only identified hazards from natural earthquakes. This research was published today in Seismological Research Letters.

Approximately 3.5 million people live and work in areas of the CEUS with significant potential for damaging shaking from induced seismicity in 2017. The majority of this population is in Oklahoma and southern Kansas.

Research also shows that an additional half million people in the CEUS face a significant chance of damage from natural earthquakes in 2017, which brings the total number of people at high risk from both natural and human-induced earthquakes to about 4 million.

“The good news is that the overall seismic hazard for this year is lower than in the 2016 forecast, but despite this decrease, there is still a significant likelihood for damaging ground shaking in the CEUS in the year ahead,” said Mark Petersen, chief of the USGS National Seismic Hazard Mapping Project.

The 2017 forecast decreased compared to last year because fewer felt earthquakes occurred in 2016 than in 2015. This may be due to a decrease in wastewater injection resulting from regulatory actions and/or from a decrease in oil and gas production due to lower prices.

Despite the decrease in the overall number of earthquakes in 2016, Oklahoma experienced the largest earthquake ever recorded in the state as well as the greatest number of large earthquakes compared to any prior year. Furthermore, the chance of damage from induced earthquakes will continue to fluctuate depending on policy and industry decisions, Petersen noted.

“The forecast for induced and natural earthquakes in 2017 is hundreds of times higher than before induced seismicity rates rapidly increased around 2008,” said Petersen. “Millions still face a significant chance of experiencing damaging earthquakes, and this could increase or decrease with industry practices, which are difficult to anticipate.”

Important Note: In the west, USGS scientists have focused on the hazard from natural earthquakes. Induced earthquakes have been observed in California as well, but they don’t significantly change the regional hazard level, which is already high due to frequent natural earthquakes. 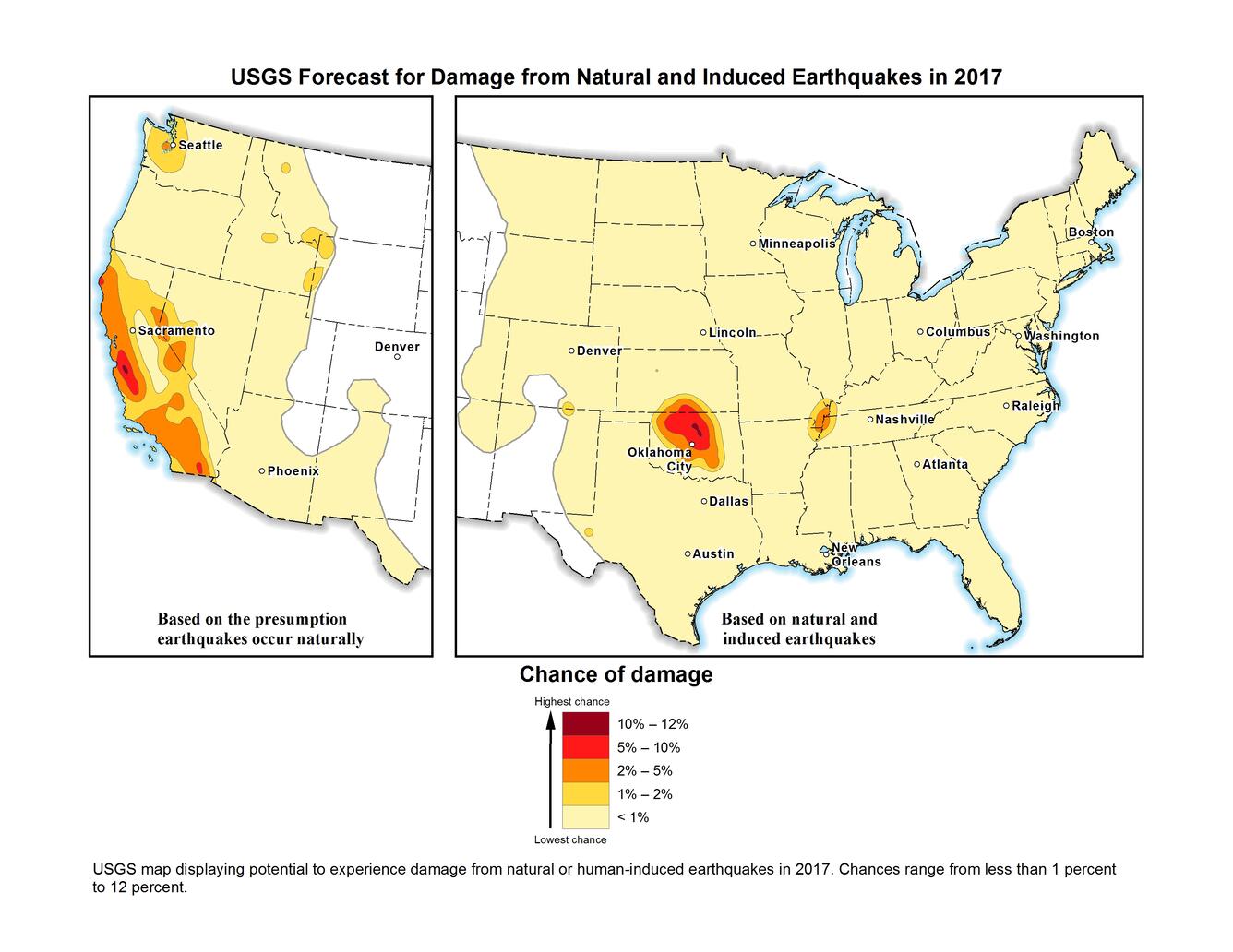 What are Induced Earthquakes?

Induced earthquakes are triggered by human activities, with wastewater disposal being the primary cause in many areas of the CEUS. Wastewater from oil and gas operations can be disposed of by injecting it into deep underground wells. Injected fluids cause pressure changes that can weaken a fault and therefore bring it closer to failure. Most injection wells do not trigger felt earthquakes, suggesting that a combination of many factors contribute to such events.

“By understanding the relationship between earthquakes and wastewater injection, informed decisions can be made on processes such as controlling the volumes and rates of wastewater injected and determining which wells are most susceptible to inducing earthquakes,” said Petersen.

Many questions have been raised about hydraulic fracturing—commonly referred to as “fracking”—and more information can be found by reading common questions.

The maps indicate an especially high ground-shaking hazard in five areas of the CEUS in 2017. These same areas were identified in the 2016 forecast.

Induced seismicity poses the highest hazard in two areas, which are Oklahoma/southern Kansas and the Colorado/New Mexico area known as the Raton Basin. In those areas, there is a significant chance that damaging levels of ground motion will occur in 2017.

Enhanced hazard from induced seismicity was also found in Texas and north Arkansas, but the levels are significantly lower in these regions than that forecasted for 2016. While earthquakes are still a concern, scientists did not observe significant activity in the past year, so the forecasted hazard is lower in 2017.

“The 2016 forecast was quite accurate in assessing hazardous areas, especially in Oklahoma,” said Petersen. “Significant damage was experienced in Oklahoma during the past year as was forecasted in the 2016 model. However, the significantly decreased number of earthquakes in north Texas and Arkansas was not expected, and this was likely due to a decline in injection activity.”

“There is specific concern in parts of the central U.S. since the forecasted hazard levels are higher than what is considered in current building codes, which only incorporate natural earthquakes,” said Petersen.

People living in areas of higher earthquake hazard should learn how to be prepared for earthquakes. Guidance can be found through FEMA’s Ready Campaign.

USGS research considers a magnitude 2.7 earthquake to be the level at which ground shaking can be felt. An earthquake of magnitude 4.0 or greater can cause minor or more significant damage.

The forecasted chance of damaging ground shaking in central Oklahoma is similar to that of natural earthquakes in high-hazard areas of California.

“Most of the damage we forecast will be cracking of plaster or unreinforced masonry. However, stronger ground shaking could also occur in some areas, which could cause more significant damage," said Petersen.

The new report is valuable for making informed decisions to reduce the nation’s vulnerability and providing safety information to those who may be at risk from strong shaking. For example, the 2016 forecast has been used by engineers to evaluate earthquake safety of buildings, bridges, pipelines and other important structures. Risk modelers have used data in developing new risk assessments, which can be used to better understand potential impacts on insurance premiums. The U.S. Army Corps of Engineers has used the information to provide guidance on updating their safety assessments of selected facilities.

Continuing collaborations between regulators, industry, and scientists will be important toward reducing hazard, improving future forecasts, and enhancing preparedness.

In recent years, the CEUS has experienced a significant increase in induced earthquakes. Therefore, in the 2017 and 2016 forecasts, scientists distinguish between human-induced and natural seismicity only for the CEUS. Scientists also used a historical catalog of seismic events dating back to the 1700s, putting a strong emphasis on earthquakes that occurred during the last 2 years.

Future research, noted Petersen, could take a more detailed look at induced seismicity in the west, including in California at The Geysers, Brawley and small areas of the Los Angeles Basin.

Distinguishing Between Induced and Natural Earthquakes

To determine whether particular clusters of earthquakes were natural or induced, the USGS relied on published literature and discussions with state officials and the scientific and earthquake engineering community. Scientists looked at factors such as whether an earthquake occurred near a wastewater disposal well and whether the well was active during the time the earthquakes occurred. If so, it was classified as an induced event.

The one-year outlook is chosen because induced earthquake activity can increase or decrease with time and is subject to commercial and policy decisions that could change rapidly. The 2016 and 2017 forecasts employ identical methodologies; the only difference is that the 2017 forecast includes an updated earthquake catalog with 2016 events. This allows for a direct comparison from one year to the next.

In contrast, the USGS National Seismic Hazard Map assesses natural earthquake hazards and uses a 50-year forecast. That timeframe was chosen because that is the average lifetime of a building, and such information is essential to engineering design and the development of building codes.

The USGS is the only federal agency with responsibility for recording and reporting earthquake activity nationwide and assessing seismic hazard. These maps are part of USGS contributions to the National Earthquake Hazards Reduction Program, which is a congressionally established partnership of four federal agencies with the purpose of reducing risks to life and property in the United States that result from earthquakes. 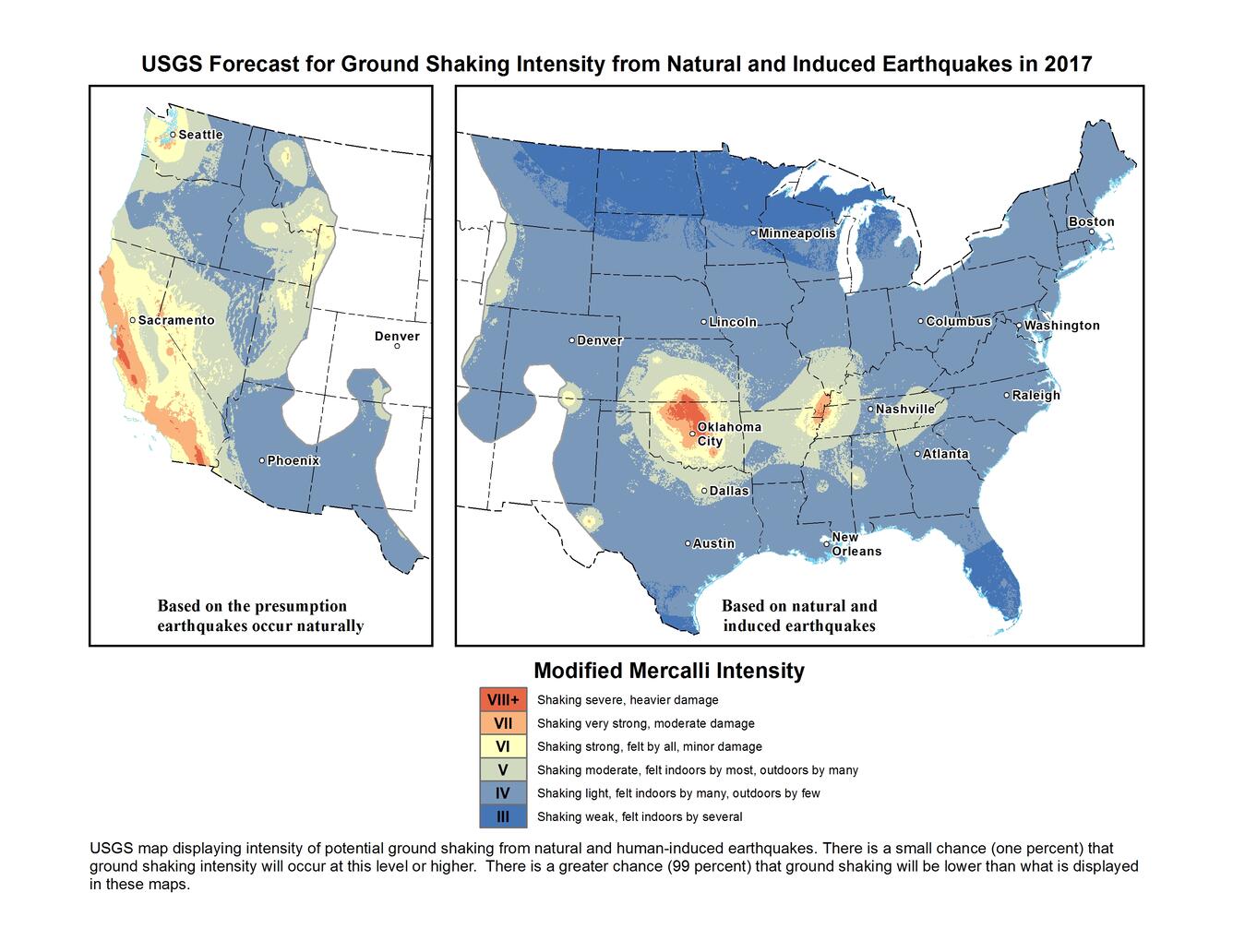