The high-tech hub that is the USGS Earth Resources Observation and Science (EROS) Center was carved out of a chunk of rural farm ground nearly 50 years ago, and the Center still counts more cows and cornstalks than human beings as neighbors.

Twelve miles from the Center, however, you’ll find the bustling city of Sioux Falls, SD. The largest city in the state has only grown larger in recent decades, with a population swelling from roughly 92,000 residents in 1985 to more than 180,000 in 2020.

All that population growth has come alongside development within the city and into its outskirts, with construction activity particularly pronounced on the southern edge of ballooning municipal borders.

Data from the USDA’s National Agriculture Imagery Program (NAIP), a georeferenced dataset archived at EROS and available at no cost to the public, can help tell that story. NAIP is collected for the entirety of the conterminous United States, with new data generally collected biannually by state, and acts as a high-resolution base layer of the national landscape for the GIS community.

In a city like Sioux Falls, a lot can happen in two years. The latest NAIP data for the city was uploaded to the EROS archive in late November. There’s plenty to see, but let’s look at some clear changes that appear for the first time in the 2020 data tied in two major sectors of the Sioux Falls economy: health care and financial services.

This animation looks at three years of data—2016, 2018, and 2020—during which the Avera Health complex at 69th Street and Louise Avenue moved from idea to reality. The massive primary facility and its sports medicine building to the south were major undertakings for Avera, one of two major health systems in the region and one of the largest private employers in the state as a whole.

Less than a mile from the new facility sits an older complex, the Avera Heart Hospital. Between 2016 and 2020, the facility picked up a new neighbor in the form of Encompass Health Rehabilitation Hospital. Just to the northwest, across Interstate 229, the new Sioux Falls headquarters of Citibank emerges. That building is home to a scaled-down Sioux Falls workforce at Citi, which had previously operated out of a larger building in the city’s northeast.

A deeper dive into NAIP data can show even more dramatic change. A few miles to the east of the health care development rests a patch of southeast Sioux Falls ground that has filled in with subdivisions, schools and commercial businesses at a rapid clip since the first NAIP acquisitions were recorded from airplanes in the early aughts.

In 2004, Sioux Falls Christian Schools’ first building stood sentry over the largely barren landscape around 69th Street and South Cliff Avenue. It didn’t take long for the school to find neighbors. In 2008, the University of Sioux Falls sports complex moved into the west. The K-12 school grows, as well, with a building addition, a soccer field and a larger parking lot added by 2020.

A roundabout appeared to the east of the school in 2012, followed shortly by a large health club. Manmade structures surround the intersection by 2020.

In the lower left quadrant of the image, a steady buildup of new homes and businesses creep across the landscape from 2004 through 2020, leaving few patches of green space west of South Cliff Avenue untouched by urban development. 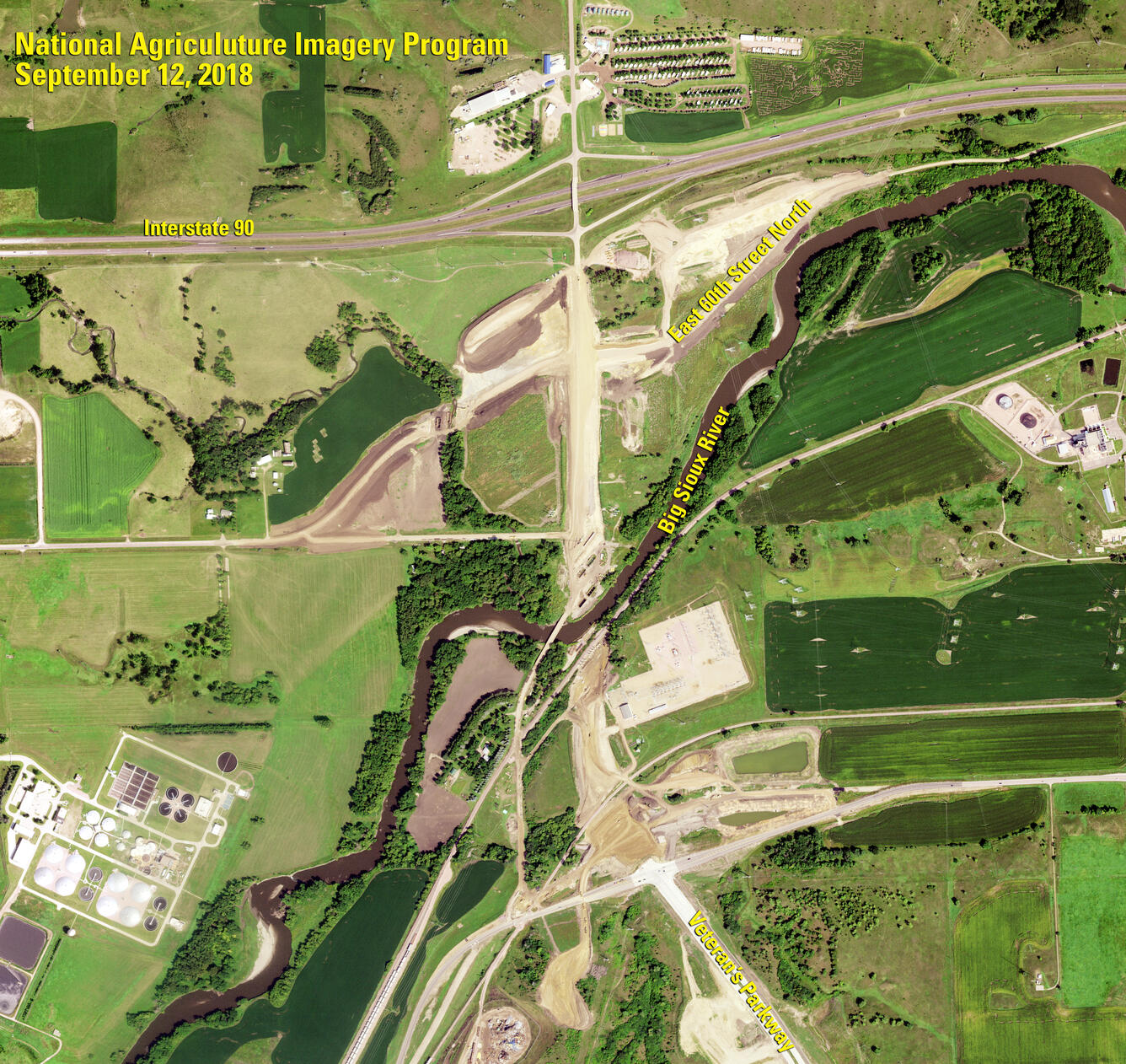 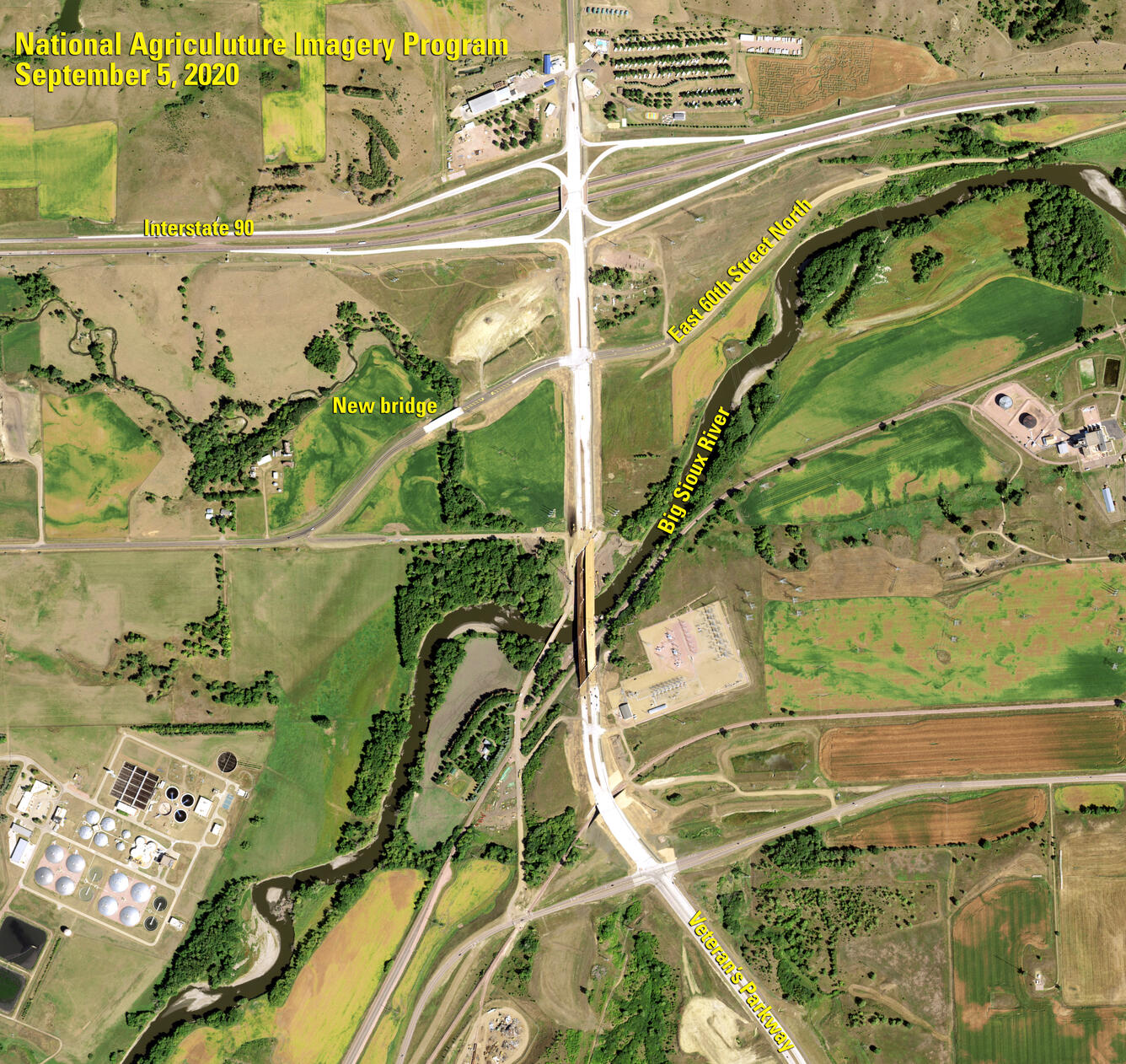 A drive from Sioux Falls to EROS is different today than it was in 2018, as well. The before-and-after slider above reveals the progress of construction at the EROS exit on Interstate 90. The reconstructed interchange at Exit 402 opened in October 2019, but the new imagery also shows Veterans Parkway coming up from the south and the bridge over the Big Sioux River. There’s a new bridge over Slip Up Creek visible on a recently added section of 60th Street. 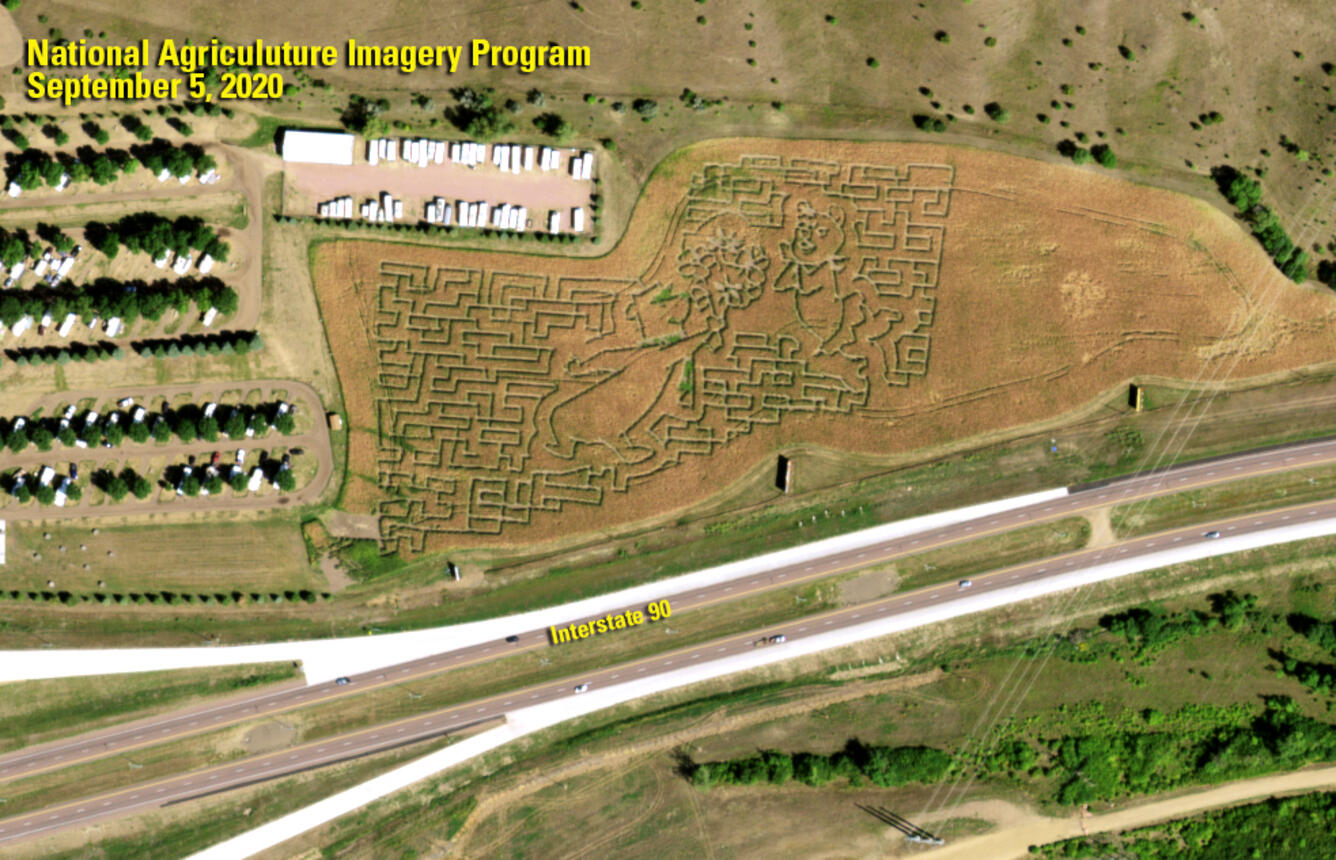 High resolution imagery is valuable as a marker of current landscape conditions, but it also offers a clearer view of quirky or interesting features than a satellite like Landsat does. This image, for example, shows a corn maze at a Yogi Bear-themed campground just off the EROS exit—a maze that would appear as little more than a green field in a Landsat image. 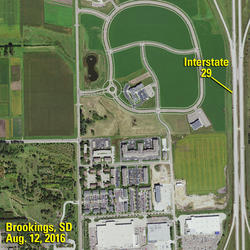 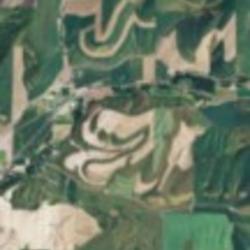