Landsat’s eyes in the sky captured a riveting story of rebirth across Australia’s central deserts this past spring of 2019.

Floodwaters from Queensland in north Australia killed an estimated 500,000 cattle and inundated homes before draining to the south, cascading over riverbanks and spilling across the floodplains toward the country’s lowest point at Kati Thanda-Lake Eyre.

The Lake Eyre Basin, one of the largest and most pristine desert river systems on the planet, regenerated in a way not seen for 45 years as waterholes and wetlands filled up—churning again with life made possible as insects, fish, and birds took advantage of nature’s window of opportunity to breed.

“Basically, we were able to monitor all of that using satellite imagery,” Vincent Rooke, who manages the Alice Springs satellite ground station for Geoscience Australia, said of the flooding. The amazing return of Lake Eyre, he added, “was something we could watch over the weeks and months using Landsat imagery ... and we were able to provide that information to other government agencies for their use.”

Relying on Landsat to help monitor and study change across landscapes is far from unique to Australia. In Brazil, Canada, Germany, South Korea, China, South Africa, and beyond, space agencies have partnered with the U.S. Geological Survey (USGS) to not only build ground stations that provide a safety net for the acquisition of Landsat data, but to also turn that data into useful applications for their homelands and the greater global community.

Landsat enabled the Republic of Korea to map the footprints of fires that consumed forests there in the summer of 2019. The satellite system has been an integral part of South Africa’s effort to develop an Advanced Crop Monitoring System that it wants to share with other African countries.

And not just crop monitoring, said Dr. Paida Mangara, who recently transitioned from the Research Development and Application Manager for South African National Space Agency’s (SANSA) Earth Observation Directorate and now is the head of the School for Geography, Archeology and Environmental Studies at the University of Witwatersrand in Johannesburg. “In South Africa,” Mangara explained, “Landsat data has been used extensively for water resource monitoring, and for water quality assessment. And for vegetation monitoring as well. If you are looking at long-term studies of vegetation, then Landsat is the most ideal sensor to use because it gives you a record from 1972.”

Today, Landsat’s role in a U.S. foreign policy strategy that promotes the peaceful use of outer space and the worldwide dissemination of civil space technology for the public good has resulted in a network of International Cooperators (IC) that numbers 14 countries and 20 ground stations.

For the USGS, the value of that network to lies in all those antennae receiving Landsat data, thus providing a global safety net if problems ever arise getting data back to the Earth Resources Observation and Science (EROS) Center to be processed, archived, and distributed. That’s maybe not a huge deal considering that the ground station at EROS, as well as ground stations in Norway, Alaska, Germany, and Australia, all serve as primary facilities for capturing data and tracking the health of the satellite. But it is an important backup nonetheless.

International Cooperators have the ability to provide input to the Landsat scheduling system and can access the interface with Landsat for special acquisition and campaign requests. ICs can receive direct downlinks of data so they can respond quickly to their own emergency data needs. And if Landsat 8’s onboard recorder ever fails or loses capacity, an IC’s direct reception capability would help prevent a gap in Landsat coverage.

For their part, ICs receiving raw Landsat data can process them to whatever recipe or level that best serves their needs. In Australia, Rooke said that means customizing the data to perform analysis of changing landscapes, in directing resources during natural disasters, and in monitoring rural fires through its Sentinel Hotspot Bush Fire System.

“We use it to look at the changing environment of Australia on a continental scale,” Rooke said. “We have different seasonal climates from northern to southern Australia. Therefore, the use of satellite imagery is just critical to making important assessments for government, industry, and business.”

When a significant bush fire struck the Republic of Korea earlier this year, burning large swaths of forest, Jung Hum Yu with that country’s National Disaster Management Research Institute (NDMI) said access to Landsat and other satellite imagery proved invaluable on two fronts. For one, the data helped them to map how much area was affected by the fire. But historic Landsat images also helped them to look back in time to see the landscape before the fire, and how it had changed afterward.

“If we are not an International Cooperator, we might wait two, three days while we seek the Landsat data,” Yu said. “But we are directly receiving the data. That means we have more time to respond.”

Landsat’s assistance during emergencies and disasters is significant with all the ICs. Likewise, the applications of Landsat remote sensing to such areas as agriculture, forests and other vegetation, water and natural resources, and more are equally important to the ICs as well.

But what really resonates with South Africa’s Mangara is the collaboration made possible by membership in the IC network. His country has been able to develop new ground processing software for Landsat 8 with assistance from the USGS. It sees what Australia is doing with Analysis Ready Data and its Data Cube, enabling time series that capture change over years and decades.

“South Africa has got an initiative on developing a new data cube,” Mangara said. “So, from these various partners who participate in this Landsat network, it enables us to be able to leverage from each other and ... advance our goals in Earth observation.”

Again, his country has developed an Advanced Crop Monitoring System that it wants to make available to other African countries. “That would be difficult to do without Landsat because a lot of algorithms that have been developed are a lot more dependent on the spectral characterization of Landsat, and on the temporal resolution,” Mangara said.

It’s a relationship, a partnership, that works well for Rooke, Yu, Mangara and the other International Cooperators—one they all hope to continue to be part of and support as Landsat 9 nears launch in a little more than a year.

“I think now that we have Landsat data for more than 40 years ... that this is a unique advantage,” Mangara said. “To be able to have comparable datasets that we can compare over time ... and there is no discontinuity of that ... it gives us a security that we in the next 10 years are still going to be receiving Landsat data. That’s very important to us. It puts our users at ease.” 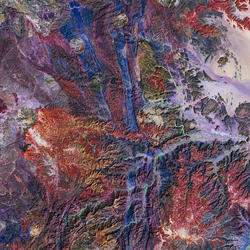 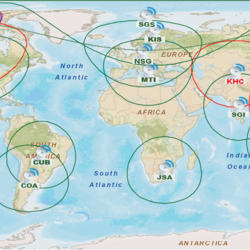 Landsat has always been an important component of U.S. foreign policy, science, and technology policy. The project's longstanding network of International Cooperators (ICs), which operate numerous International Ground Stations (IGS) around the world, embodies the United States’ policy of peaceful use of outer space and the worldwide dissemination of civil space technology for public bene

Landsat has always been an important component of U.S. foreign policy, science, and technology policy. The project's longstanding network of International Cooperators (ICs), which operate numerous International Ground Stations (IGS) around the world, embodies the United States’ policy of peaceful use of outer space and the worldwide dissemination of civil space technology for public bene

Landsat 9 mission updates and ground station preparation are among the major topics on the agenda for the scientists and engineers from 11 counties...