A new Landsat Level-3 science product that tracks the presence of burned areas in Landsat imagery today and back through the satellite system’s decades-old history promises to answer a lot of questions for fire scientists and land managers.

Where have fires occurred, and how has that land cover come back after the fire? How have vegetation and fuel loads changed after a disturbance? What are the fire frequencies in different ecosystems across, say, a particular state, and how might that impact threatened species conservation?

The Level-3 burned area products can help answer those questions—without a lot of the preprocessing of data that goes into such queries—said Todd Hawbaker, a Research Ecologist at the USGS Geosciences and Environmental Change Science Center in Denver, CO, and the principal investigator on the development of the burned area algorithm.

Hawbaker talked about all that and more in this question-and-answer session.

What were some of your biggest challenges in developing the burned area product?

“Producing the algorithm and making sure that it was valid. That in and of itself was a huge challenge given the volume of Landsat data that is in the archive. You can imagine when you’re processing hundreds of thousands of images, things don’t always work right. So, coming up with ways to visualize the data quickly and easily, and doing a thorough QA (Quality Assessment) on the data, was a challenge. Most of our effort was making sure that the algorithm worked well and developing quantitative validation metrics so end users could decide if the products meet their accuracy needs.”

How has your team used the burned area product?

“We’ve had some spinoff projects. One was led by Melanie Vanderhoof here, who was also co-author on the burned area algorithm, looking at patterns of vegetation recovery after areas burned in the West. She determined that we could use differences between snow-time NDVI (Normalized Difference Vegetation Index) in the winter, and snow-free NDVI during the growing season, to help identify where burned areas are coming back as coniferous forests, or if they’re converting to more aspen dominated, or if they’ve converted to grass or shrub. She’s building off that now to try to determine if there are drivers that we can quantify that would help us predict down the road what burned areas are going to recover and which ones aren’t. That’s something we could use in vegetation models to make long-term predictions about fire impacts.”

Is the burned area product useful for identifying fire risks across the country?

“It gets to be a little bit challenging. The burned area products have so much information in them, but we wish there was more there actually. We wish we knew if any given burn patch we found was a wildfire or a prescribed fire or what, because there are different drivers controlling the occurrence of wildfires versus prescribed fires. And that is important to understand for modeling things like fire risk.”

Are there not ways you can differentiate that?

“We have some ideas for how to do that. It gets beyond the remote sensing and requires pairing the remotely sensed products with on-the-ground fire reports, or social media even. It’s a much bigger challenge beyond just finding the burned area in the imagery.”

Could the burned area product be useful as part of any kind of analytical tool?

“The burned area products are really cool because they are definitely filling in information gaps. It’s a nice new dataset to augment the fire information we have from agencies and firefighting reports, but there still are some challenges to using it in any sort of analysis. Like knowing whether a fire was a prescribed fire or a wildfire. Or knowing the exact timing of the fire. We can identify the date that the imagery was collected that the burned area was first visible in. That’s one of our data products. But we’re often interested as well in when did the ignition of that fire occur, and what were, say, the weather conditions over the lifespan of the fire. And that’s a little bit trickier because of the revisit intervals that Landsat has.”

Are these Level-3 products just masks, or what are they?

“We produce two layers at the scene level. There’s a Burn Probability Surface that ranges from zero for unburned to 100 for burned, and that carries through water and cloud masks that we extract from the Landsat QA band. Then there’s a second product we call the Burn Classification Product, which is based off that Burned Probability Surface, but it’s thresholded and segmented into a binary burned-unburned mask. What we found is, some people like the Burn Classification Product, just running with it. Other people really want the Burn Probability Product and apply their own thresholding to generate burned areas.”

With the burned area product, how do you separate burned areas from all the different types of land change that are out there?

“We’re fairly confident that most of the changes that we detected were fire, but the algorithm isn’t perfect. We know there are errors of omission and commission. Sometimes we just miss fires because there isn’t a very strong spectral response and our algorithm misses them. Other times, there’s types of change that changes vegetation in a way that it looks like it may have burned. For instance, in agricultural areas, there’s a lot of confusion between burned areas and tillage depending on the time of year. And in some cases, I think we’re pretty good at separating burned areas from clear cuts. But every now and then, you’ll see a clear cut that we mapped as a burned area, and it gets really difficult to tell what happened because sometimes foresters will clear cut a stand, then they’ll go in and burn all the residue, to prepare the seed bed for planting.”

Who’s most likely to use these products?

“Within USGS and other federal agencies, projects like LANDFIRE and Monitoring Trends in Burn Severity (MTBS) have been using our data. Even as we were developing the algorithm, they used prototype data and then the final released data. LANDFIRE would use it to help in their refresh process, where they’re updating their vegetation and fuels layers to reflect changes that were made by disturbances. So, the burned area products were one data source in a whole slew of data sources that they were using. For MTBS, a challenge they have always had is finding or figuring out which Landsat scenes to use to map severity. And because they can use our products to quickly flip through scenes and figure out where the fires show up and where they don’t, that narrows down their search, allows them to get through that step more rapidly, and focus on mapping the severity within the fire.”

Are you getting interest from elsewhere, too?

“We’ve also had a lot of interest by people in the southeastern U.S., where there’s lots of prescribed burning. They have state-level databases of burn permits, but they don’t know if those burns are carried out or not on the landscape. Nor do they know exactly where they occurred. So, researchers at the Tall Timbers Research Station in Florida are trying to couple the state-level burn permit databases with our data to figure out where these prescribed fires are happening, what the fire frequencies are in different ecosystems across the state, and what does that mean for endangered species, or threatened species conservation.”

They’re hopeful then about the burned area product?

“People in the Southeast have been really excited about this. In their mind, it’s one of the best data sources they have. They’re willing to take it with all the messiness and all the errors, and work with it, and kind of refine it into something that meets their own needs. I think that’s exciting. I think it’s really empowering and demonstrates the capability of long-term land monitoring with remote sensing.”

Is the burned area product a time saver?

“I’d like to think so. I think our products help people find the needles in the haystack. If you think about wildfires across the U.S., one, maybe two percent of the country burns each year. So, when Landsat imagery is used to map fires, you can spend a fair amount of time identifying which Landsat scenes have visible burned areas. That takes a lot of labor, so we’ve come up with an initial cut of where we think you can see burned areas in Landsat scenes. People can use those to go in and do more fine-scale analyses or do more add-on analyses from there.”

Are there levels beyond Level-3 to be explored?

“I think the next level is to look at individual burn patches that we’ve mapped and try to attribute them with information that’s useful for people that want to model fires or understand patterns of fires and impacts they have on the land.” 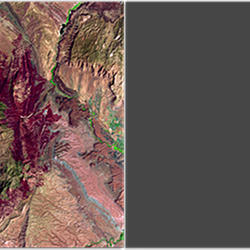