Greater sage-grouse populations may decline by more than 70% within free-roaming horse-occupied areas by 2034 if horse populations increase unchecked at current rates. Reducing horse numbers could neutralize their negative impacts.

These were the key findings of a study led by the U.S. Geological Survey (USGS), which was the first to evaluate the ecological relationship between two symbols of the American West: greater sage-grouse and the horses that roam freely in parts of the western United States.

Previous research indicates sage-grouse have experienced substantial population declines within the arid sagebrush environments due to steady and continued habitat loss. Habitat degradation by free-roaming horses is just one of the many threats to sage-grouse, an indicator species associated with the overall health of the sagebrush ecosystem. Wildfire and other disturbances to the sagebrush habitat also play a role in the bird’s declining numbers.

“While this study highlights the challenges of maintaining biodiversity in sagebrush environments, it also provides valuable insights into the options for wildlife management,” said David Applegate, associate director for Natural Hazards exercising the delegated authority of the Director, U.S. Geological Survey. “It’s an example of how the USGS provides landscape-scale science and data about resource conditions, trends and interactions that state and federal wildlife managers can trust to help make informed and effective decisions.”

Free-roaming horses in the western United States are descended from domesticated stock introduced during the 16th and 17th centuries. In recent decades, horse populations have increased swiftly in sagebrush ecosystems, degrading the habitat of the sage-grouse and other native species. The Bureau of Land Management (BLM) has established appropriate management levels, known as AMLs, to balance utilization by horses, livestock and wildlife. In areas where horse abundance was at or below currently established AMLs, impacts to sage-grouse population trends were consistent with areas where horses are absent on the landscape altogether. This suggests that the maximum AMLs are effective at neutralizing the adverse impacts that horse populations have on sage-grouse populations and that free-roaming horses have the potential to coexist with native wildlife under the right management approach.

A related analysis found that for every 50% increase in horse abundance over an AML, sage-grouse abundance is likely to decline by 2.6%. When horse populations are double the established AML, for example, there is a 76% probability of sage-grouse decline. This has important implications for parts of Nevada, where horse populations are more than four times higher than the AML set by the BLM for that area.

“Preserving the integrity of sagebrush ecosystems within the paradigm of multiple-use is a common goal of management agencies tasked with public lands stewardship,” said Peter Coates, a research wildlife biologist with the USGS Western Ecological Research Center and lead author of the study. “The results of the study indicate that coexistence is possible for free-roaming horses and sage-grouse if horse populations are maintained below established AMLs.”

The study provides critical information for managers of sage-grouse and free-roaming horses in the Great Basin. The study was partially funded by the BLM, and represents a collaborative effort between USGS, BLM, U.S. Fish and Wildlife Service, Nevada Department of Wildlife and the California Department of Fish and Wildlife through the Results Oriented Grazing for Ecological Resiliency project.

Greater sage-grouse (Centrocercus urophasianus) are the most visible of >350 plant and wildlife species that depend on sagebrush. Their conservation status was determined by the U.S. Fish and Wildlife Service in 2010 to be warranted for listing but precluded by higher priorities. Habitat and population fragmentation, coupled with inadequate regulatory mechanisms to control development on public...
By
Land Management Research Program, Forest and Rangeland Ecosystem Science Center
link
November 6, 2017

Greater sage-grouse (Centrocercus urophasianus) are the most visible of >350 plant and wildlife species that depend on sagebrush. Their conservation status was determined by the U.S. Fish and Wildlife Service in 2010 to be warranted for listing but precluded by higher priorities. Habitat and population fragmentation, coupled with inadequate regulatory mechanisms to control development on public...
Learn More
link 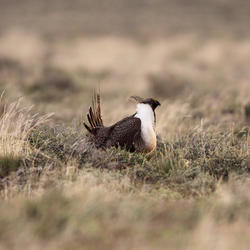 Greater Sage-grouse are iconic birds found only in the Great Basin of the western U.S. Known for their showy courting displays, sage-grouse rely on native sagebrush habitat to shelter their young. Dr. Pete Coates is providing resource managers with the tools and information they need to conserve sage-grouse as invasive plants, evolving wildfire patterns, and energy development change the Great...
Learn More