In the wake of Hurricane Katrina, Congress directed the Mobile District U.S. Army Corps of Engineers to repair Mississippi barrier islands as a first line of defense against future storms. Nearly a decade later, the Southeast CASC celebrates its involvement in the recent completion of one of the largest civil works projects in the District’s history: the restoration of Ship Island, Mississippi.

When Justin McDonald accepted his first project lead position with the Mobile District U.S. Army Corps of Engineers, he had no clue how many decisions would hinge on sea turtle nests and sturgeon.

“I really had no idea what I was getting into,” McDonald says.

But as the point person of the Coastal Resiliency Program (formerly the Mississippi Coastal Improvements Program), a congressionally-authorized program to enhance the resilience of the Mississippi coast, he quickly learned that big projects are characterized by unexpected complexities.

After Hurricane Katrina devastated coastal communities across the Gulf, Mississippi and neighboring states made extensive investments in defending against future storms. A major priority: repairing the battered barrier islands that serve as important “speed bumps” for wind and waves.

One of the largest islands on the docket was Ship Island, a bisected stretch of sand 10 miles offshore of Gulfport, Mississippi. The site of a former Civil War fort, the island was cut in half by Hurricane Camille in 1969 and partially submerged by Katrina in 2005. Nevertheless, it remains a popular tourist destination as part of the Gulf Islands National Seashore and is an important habitat for birds, sea turtles, and the endangered Gulf sturgeon.

“It’s a really nice place to visit,” says Mark Ford, Wetlands Ecologist at the National Park Service. “That part of the Gulf, it’s almost like being in the Caribbean. The water’s very clean, clear, kind of green blue. [It’s] very popular with the locals.”

Closing the “Camille Cut” to rejoin the two halves of Ship Island was one of the largest island restoration projects ever undertaken by the U.S. Army Corps of Engineers Mobile District or the National Park Service. The project spanned eight federal jurisdictions, had a $439 million budget, and required 22 million cubic yards of sand, enough to fill the Empire State Building sixteen times.

Yet the restoration project as a whole was outside the bounds of normal Park Service priorities.

“The Park Service in general doesn’t restore changes that nature made,” Ford says. “We would never [fix] something that two hurricanes did. But Congress directed us to [restore these barrier islands], because the feeling is if they could have fixed the Camille Cut before Katrina, there wouldn’t have been as much surge that would have hit the mainland.”

Accounting for the (often conflicting) needs, goals, and jurisdictions of the many federal and state agencies involved in the restoration was one of the most difficult aspects of the project. Endangered Gulf sturgeon had moved into the open water between the two islands, necessitating long conversations with NOAA’s National Marine Fisheries Service about sand placement. Construction displaced sea turtles and birds, requiring coordination with the U.S. Fish and Wildlife Service to protect and relocate nests. Offshore sand dredging had to be scheduled around available resources and equipment with the Bureau of Ocean Energy and Management.

“The bigger the project, the more people that are involved,” says Ford. “This one was huge.”

The U.S. Geological Survey (USGS) joined the team early in the planning process to develop monitoring and adaptive management protocols for the project. They brought with them a tool designed specifically to untangle complex management issues: structured decision making (SDM).

“Structured decision making is a way to make [a decision] open and transparent,” says Greg Steyer, USGS Science Advisor for the Gulf of Mexico. “It comes down to getting all the stakeholders to work together on how to achieve the best results.”

“It isn’t a tool that you use in every instance. It truly is [most] valuable when you have competing objectives.”

Steyer and his team worked with McDonald and the Army Corps to apply structured decision making to the Ship Island restoration project, focusing on exploring mid-construction challenges. This portion of work was funded by the Southeast Climate Adaptation Science Center (Southeast CASC).

“Everybody’s going to have something to say about what we do when things don’t go as planned, and things never go as planned,” McDonald says. “We wanted to be forward thinking and say, ’Okay, what if you’re in the middle of construction and a hurricane blows a breach in the area you just constructed? What do you do?’”

Steyer’s team, including former USGS Ecologist Michelle Meyers, facilitated the Ship Island structured decision-making process from 2014 to 2015 through a series of webinars and workshops attended by representatives from the major stakeholder agencies involved in the barrier island restoration. Webinars explained each step of the process to help participants prepare for in-person discussions, while the workshops got everyone in a room together to formulate the main project objectives, potential problems that could arise during construction, and the consequences and tradeoffs of different response actions.

Stakeholders assigned numeric values to each aspect of the decisions, allowing them to articulate which elements were most important to them and why. Behind the scenes, the workshop facilitators input these values into statistical models to generate action recommendations that could inform subsequent discussions. Each step was documented, so that participants could refer back to why specific decisions were made.

“One of the most important things was getting that collaborative decision from everybody and just working through it so they understood the views of other people,” Meyers says. “Through this [SDM] process, we were able to document and acknowledge that those tradeoffs had to be made.”

“The process really helped [the agencies] balance their different goals and see how they were all included.”

At the end of the SDM process, the project team had a detailed list of optimized responses to mid-construction disasters and a healthy respect for the views of their fellow participants.

“They definitely valued what I had to say,” says Ford from the National Park Service. “It was a learning experience for me. I’m not a modeler, so it was kind of fascinating to see this whole thing come together. It was a good group of people to work with.”

“We were honest with each other,” says McDonald. “And when you do that for long enough, even if there’s a position that someone has that may not necessarily align with your goals, you know you can work through it.”

The successful SDM process on Ship Island embodies the partnership-driven focus of the Southeast CASC.

“[This research team] shows the best of what the USGS can do, to not just point [resource managers] to the science that’s done, but to help them actually incorporate the science into the kind of sticky decisions [the managers] are charged with making,” says Ryan Boyles, USGS deputy director of the Southeast CASC.

The Southeast CASC has invested heavily in developing and applying decision support tools, such as structured decision making, to modern management challenges.

“Our goal is to make sure that the science gets translated into something that leads to a useful decision,” Boyles says. “The idea of decision analysis and the science behind how communities make decisions in light of all those sticky competing issues, that is something we’re interested in fostering.”

“It’s a big step in going from useful science to science that’s actually being used.”

Since the Ship Island analysis, the CASC has funded a number of decision support projects across the region, including work on amphibian conservation in Puerto Rico. They also hired Research Ecologist Mitch Eaton, who specializes in decision science, and their Global Change Fellows receive decision support trainings each year.

These tools are particularly important when helping resource managers deal with climate change.

“Climate change sort of makes your brain hurt, right?” Boyles says. “Because there’s so much complexity, so much uncertainty. But [these tools] show resource managers that the climate question doesn’t have to be a barrier to action, it doesn’t have to add complexity that can’t otherwise be handled.”

“Here’s a way you can incorporate climate issues into other management challenges in a way that is tractable, transparent, and leads to robust decisions.”

The Mobile District Army Corps of Engineers broke ground on Ship Island in 2017 and completed the restoration in December 2020.

Construction spanned three hurricane seasons. Despite a barrage of wind and waves, the newly-placed dunes and vegetation have remained intact and are performing “extremely well” so far, according to McDonald – a good sign for the long-term outlook of the island.

“Ship Island got hit [by storms] repeatedly,” says Ford. “The project took a beating and the landscape changed, but [the restored area] survived. So that was encouraging.”

Although they didn’t experience any mid-construction disasters, McDonald and his team were thankful they had SDM-generated contingency plans in their back pocket.

“Ultimately, what that tool told us was that if there’s a problem, you fix it now. And that’s what we did,” he says. “We never had major issues that required a big financial investment to fix or [needed] a bunch of extra sand to repair, but had we been in that situation we knew what the answer was in advance.”

Inspired by the Ship Island success, members of the project team have gone on to use structured decision making in other projects. McDonald and the Mobile District Army Corps have partnered with the USGS to apply SDM to other coastal restoration projects in the region, including a study to identify restoration options for Dauphin Island off the coast of Alabama. Similarly, Steyer’s collaborators at the Louisiana Coastal Protection and Restoration Authority have incorporated SDM into their barrier island system modeling approach. And Meyers applies active adaptive management practices, including decision support analysis, to her new role with the U.S. Army Corps Regional Planning & Environment Division, South New Orleans District.

“I’m glad [the SDM framework for barrier island restoration] is being adopted and built upon through other partners in the region.” says Steyer. “That’s super cool.”

Looking Back and Moving Forward

“I think it’s truly a model of how to do this type of work. I have no doubt it will probably be the best product I ever work on in my career.”

The structured decision making process for the Ship Island restoration was funded in part by the Southeast CASC project, “Structured Decision-Making as a Tool for Coastal Restoration: A Case Study on Ship Island, Mississippi." 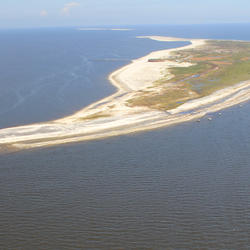 Structured Decision-Making as a Tool for Coastal Restoration: A Case Study on Ship Island, Mississippi

Barrier islands protect mainland areas from storm surge, but can erode over time and require restoration. Ship Island, a barrier island off the coast of Mississippi, provides an example of this: the island was battered by Hurricane Camille in 1969 and split into two separate islands. As part of the Mississippi Coastal Improvements Program, the U.S. Army Corps of Engineers plans to use approximatel
By
Climate Adaptation Science Centers
link
December 31, 2012

Structured Decision-Making as a Tool for Coastal Restoration: A Case Study on Ship Island, Mississippi

Barrier islands protect mainland areas from storm surge, but can erode over time and require restoration. Ship Island, a barrier island off the coast of Mississippi, provides an example of this: the island was battered by Hurricane Camille in 1969 and split into two separate islands. As part of the Mississippi Coastal Improvements Program, the U.S. Army Corps of Engineers plans to use approximatel
Learn More