Deforestation is a significant concern for many parts of the globe, particularly in places like the rainforests of the Amazon or the Congo. Scientists, governments, and non-governmental organizations turn to satellite data to track deforestation, as well as to set targets for improvement.

On the latest episode of Eyes on Earth, we hear from a remote sensing specialist with the U.S. Forest Service Rocky Mountain Research Station, Dr. Eric Bullock. As a post-doctoral researcher at Boston University, Dr. Bullock developed an open source algorithm for monitoring tropical deforestation using Landsat data. Dr. Bullock is now piloting this methodology for use as part of the United Nations Reducing Emissions from Deforestation and Degradation in Developing Countries Program., which offers incentives for reduction in emissions and sustainable practices.

Here are some highlights from our conversation with Dr. Bullock on Episode 46 of Eyes on Earth, edited for length and clarity.

EYES ON EARTH (EOE): First off, let’s talk a little bit about your background. How did you come to remote sensing and how did you land on this particular area of research?

ERIC BULLOCK (EB): Like anyone, my road to where I am today has been rather long and windy. I was working as a forest restoration technician at the Santa Monica Mountains. That’s a really beautiful park right outside of L.A. I was doing a lot of field work for restoration of ecosystems after fires, and what became really clear to me was the importance of data—especially spatial data. What we really needed was real-time information on fire damage, species distribution, ecosystem change. We just needed all the information that we could get our hands on while we were out in the field.

So that really interested me, enough to want to pursue my master’s in remote sensing. I went to (Boston University) to try and learn more about how I could start to develop remotely sensed information. I just loved it. I got to be involved in a little bit of research through my master’s, but it really wasn’t until I started to pursue me PhD that I really started to get more involved in global initiatives to monitor forests.

EOE: What’s the difference between deforestation and degradation? And why is it important to monitor those things? How does satellite data help us do that?

EB: Often when you see on the news or in movies, somewhere in Borneo or in the Amazon being cleared for something like agriculture or pastureland, that’s really large-scale deforestation. So that’s the conversion of a forest to another land cover, such as croplands. That usually occurs over large areas, not always, but the most common of what you see in say the Amazon.

Degradation is a process where forests are disturbed, or they’re affected by people through causes such as selective logging—just removing a branch here, some timber there. But it remains a forest.

This is important because with the degradation of something like selective logging, there’s still a lot of the ecological consequences there, like carbon being emitted into the atmosphere. The forest will still be reducing its ability to perform ecological functions.

EOE: Tell us about the Continuous Degradation Detection (CODED) algorithm. How did you develop this? What does it look for? What kinds of data go into this algorithm, and how has it been applied?

EB: CODED comes out of what has really been a paradigm shift in the remote sensing community towards the use of time series analysis. The basic idea is that instead of just using one image or one bit of data from one year and comparing it to five or ten years later, you’re using all of the data that you have available to you. What CODED does is characterizes the normal state of a stable forest through time, and then automatically detects the subtle deviations from that trend and labels them either degradation or deforestation.

EOE: What did you learn by applying CODED to the Amazon?

EB: I’ve now used CODED in over 20 countries and what we’re finding has been pretty consistent everywhere. The more we look in detail for these subtle degradation events, the more change we’re finding. In the Amazon, for example, we found that there was between 44 and 60 percent more area of disturbed Amazonian forest. Previous analyses had mostly ignored these degradation events, either for practical purposes or because it was not the focus of that study. This is similar to what we’re finding elsewhere—when you account for degradation, a lot more of the forest is disturbed than we previously thought.

EOE: It’s my understanding that you previously worked on a deforestation algorithm using NASA’s MODIS sensor. Can you tell us about that? How did, or how does, that work factor into what you did with Landsat?

EB: CODED has primarily used historical data—between 30 and five years ago, for example, just trying to understand how much of the forest has been disturbed. Landsat data is recorded between every eight and sixteen days. With MODIS data, you get a new image of almost everywhere in the world, every single day. This is ideal for near real-time monitoring. We developed an algorithm that used daily MODIS data to create alerts of forest disturbance. If you are trying to mitigate illegal deforestation, if you had an alert of disturbance as it was occurring, you could theoretically go out and try and stop that event. We tested this in the Amazon and it worked really well.

What we’re currently trying to do is create a similar system, but instead of using this daily MODIS data, we’re trying to use a combination of different sensors to try and replicate that daily repeat cycle of MODIS, but at the spatial resolution of something like Landsat.

EOE: What data sources or data products are on the way that you see as particularly useful for monitoring deforestation?

I’m really excited about Harmonized Landsat-Sentinel. Sentinel 2 is a couple sensors from the European Space Agency that records very similar data to Landsat. HLS is a product that as a user you’ll get an image that looks like a Landsat image or a Sentinel 2 image. You won’t need to know which sensor it is coming from. It’s comparable to the Landsat data we’ve already been working with, so we can input it directly into our analysis and just get much, much more data.

One sensor I’m really excited about is called GEDI. GEDI is a lidar sensor onboard the International Space Station. Lidar uses laser light to basically measure distance, so it can be used to study different attributes of a forest that you can’t get with an image like from Landsat. This will be really useful, not so much for trying to identify deforestation or change of any sort, but for learning about the different properties of that forest. GEDI is going to be used to create a pretty high resolution, high-quality forest biomass data set. Which will be really useful in trying to better understand carbon implications from cutting down the forest.

The other general type of new data I’m excited about is radar data. We’ve thus far been talking about optical imagery, which is basically like taking a photo from space and doing an analysis on that. That’s what Landsat, MODIS, and Sentinel-2 are. It’s really good for identifying change on the landscape when there are not clouds. If there is a cloud, the image you take from space is really an image of the cloud. In the tropics, it is very frequent that we see cloud cover. Right now, I’m working on a project to incorporate not just different sources of optical imagery, but to also radar data through a sensor called Sentinel-1, which is C-Band radar. A radar beam can penetrate through a cloud, reflect off of a forest or off the canopy, and return to the satellite without being horribly affected by that cloud.

EOE: Tell us about the UN’s Reducing Emissions From Deforestation and Degradation in Developing Countries Program (REDD+). What role do you play there, and where have you taken it so far?

EB: The general idea is that if a country could prove that they’re reducing their forest-related emissions, they will receive monetary compensation through the United Nations. In order to do that, they need to be able to monitor their emissions from deforestation and degradation, to prove that a, this is what their emissions used to be, and b, now they have taken actions to reduce those emissions, and this is what they are now. We’ve piloted CODED now in a couple of countries West Africa, the Pacific Islands. It is shown to be a pretty effective tool in getting this really necessary information on forest change, deforestation and degradation.

EOE: So, that’s what you’re doing for this U.N. program. But you work at US Forest Service which is kind of interesting. How does that translate into something that could potentially be useful for the Forest Service or useful state-side? Where would you use this in the U.S.?

EB: The Forest Service monitors for change in U.S. forests. The algorithms that I develop or that my colleagues develop, could then be applied in the U.S. to better monitor or change what is happening here. It kind of goes back to my reason for getting into remote sensing in the first place, right? I was a restoration technician that needed real-time information on fire damage. The algorithms that I help develop could be used back in the United States for looking at disturbance from fire. Pest damage is another one—beetle damage—or just for getting a better handle of the state of our forests, even the ones that are not changing.

EOE: Dr. Bullock, any closing thoughts? Anything you would like to make sure that we talk about on this podcast?

EB: I do just want to say that all of the research that I get to do wouldn’t be possible without free and open data policies from the USGS , NASA and European Space Agency, which are both creating this data and making it very accessible to scientist like me. I do think it is incredibly important to give credit where that is due, because it’s really, really, remarkable that we get all this high-quality data to work with. 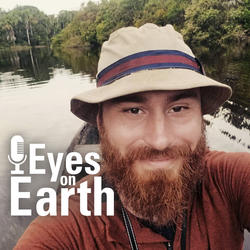 Eyes on Earth is a podcast on remote sensing, Earth observation, land change and science, brought to you by the USGS Earth Resources Observation and Science (EROS) Center. In this episode, we hear how Landsat can aid the study of deforestation around the world.

Eyes on Earth is a podcast on remote sensing, Earth observation, land change and science, brought to you by the USGS Earth Resources Observation and Science (EROS) Center. In this episode, we hear how Landsat can aid the study of deforestation around the world. 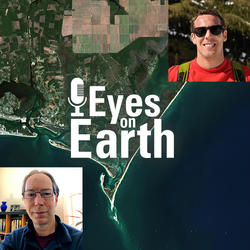 Eyes on Earth is a podcast on remote sensing, Earth observation, land change and science, brought to you by the USGS Earth Resources Observation and Science (EROS) Center. In this episode, we hear about the value of combining satellite data sources.

Eyes on Earth is a podcast on remote sensing, Earth observation, land change and science, brought to you by the USGS Earth Resources Observation and Science (EROS) Center. In this episode, we hear about the value of combining satellite data sources. 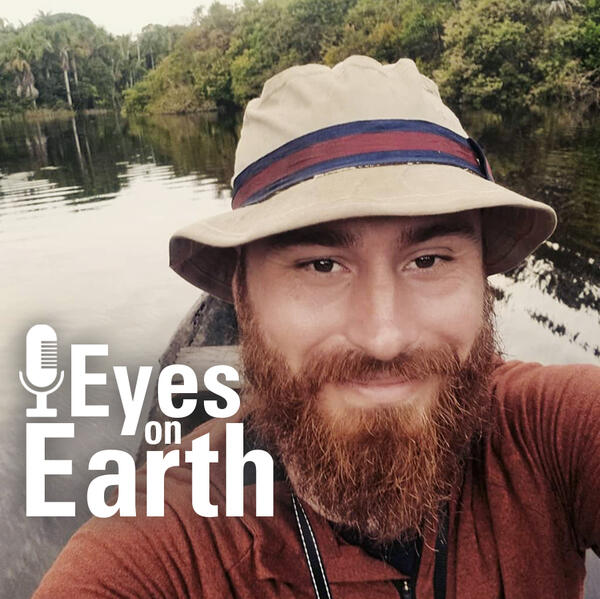 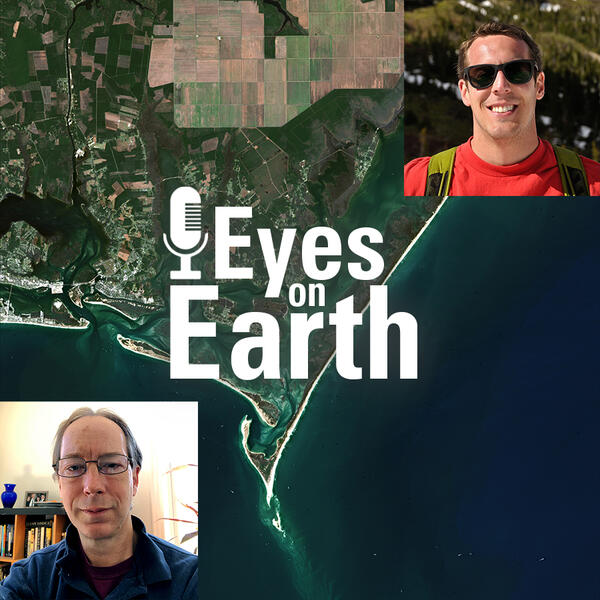 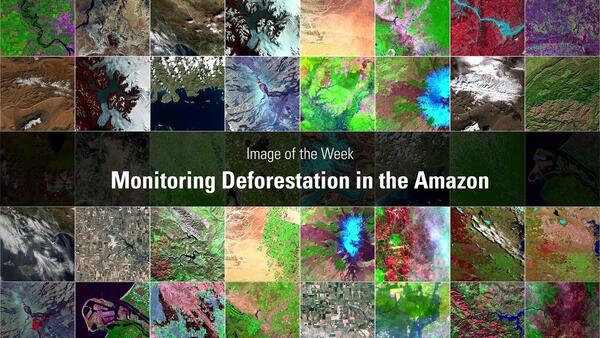 Landsat satellites have monitored the Earth’s surface for nearly 50 years, providing critical information for countless areas of study and real-world...