Editor:  In the public interest and in accordance with Federal Aviation Administration regulations, the USGS is announcing this low-level airborne project.  Your assistance in informing the local communities is appreciated.

The U.S. Geological Survey will conduct an airborne survey to study the rock layers under a region of southeast Missouri and western Illinois starting in late November and estimated to last through March 2019. When the data analysis is complete, results will provide state-of-the-art, subsurface maps that will contribute to a wide range of 3D representations of the nation’s exposed and concealed geology.

As part of this research, a low flying airplane with auxiliary instrumentation will be used. Residents and visitors should not be alarmed to witness the aircraft flying low to the ground near the Farmington, Salem, and Rolla, Missouri region. 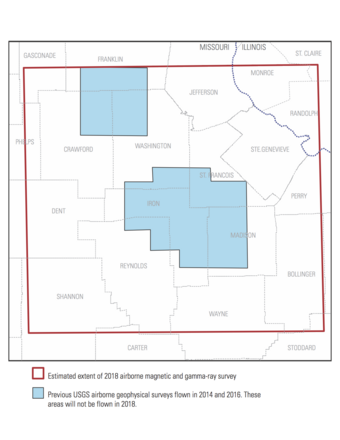 The airplane is under contract to the USGS through TerraQuest Ltd. The aircraft will be operated by experienced pilots who are specially trained and approved for low-level flying. All flights are coordinated with the FAA to ensure flights are in accordance with U.S. law.

The airborne survey will augment and extend geophysical surveys flown by the USGS in 2014 and 2016. The area flown will cover important mining districts around the St. Francois Mountains and major structures with potential seismic implications within the New Madrid Seismic Zone.

USGS scientists plan to use the new geophysical data to help determine the 3D geologic framework surrounding known and potentially undiscovered critical mineral resources. In addition, this research is meant to map the soil and rock chemistry at the surface and to study rocks that are deeply buried, beneath limestone and sandstone layers.

The airplane will carry magnetic sensors mounted on the wing tips and tail stinger of the aircraft and an instrument inside the aircraft. These instruments will measure low, background levels of natural radioactivity that will be used to map different types of surface rocks and soils. None of the instruments carried on the aircraft pose a health risk to people or animals.