The population of adult Atlantic sturgeon that migrate to the Delaware River each year was once comprised of hundreds of thousands of individual fish, but new estimates indicate fewer than 250 adults return annually according to a U.S. Geological Survey-led study.

Spawning habitat degradation, poor water quality, overharvesting and bycatch mortality – unintentional deaths caused by commercial fishing – have resulted in significant declines in Atlantic sturgeon populations. This ultimately resulted in a coastwide fishing ban in 1997 for the species and their listing under the Endangered Species Act of the U.S. in 2012. Known for their size, growing as long as 14 feet, Atlantic sturgeon are culturally important and were once sought after for their prized caviar, which is the primary reason they were overfished.

“The Delaware River population of Atlantic sturgeon has been the focus of several research efforts, and these new estimates of population size will provide important information resource managers can use to improve the conservation of this endangered fish,” said David Kazyak, an ecologist with the USGS Eastern Ecological Science Center and co-author of the study.

Atlantic sturgeon are a long-lived, migratory species that spend most of their lives in the ocean but spawn in freshwater rivers. Historical records show the species once spawned in at least 35 rivers in the U.S. and Canada, with the Delaware River thought to have supported the largest population of Atlantic sturgeon. Scientists now believe only 22 rivers still support naturally reproducing populations of the fish.

Estimating the population size of Atlantic sturgeon is challenging because adults are rare and travel across vast areas in the river and ocean making them difficult to capture. In the Delaware River, sturgeon occupy a shipping channel frequented by large cargo vessels, which makes most fish-sampling methods unsafe. Together, this has led to a lack of data needed to determine the number of adults that reproduce in this river.

To fill this data gap, researchers analyzed the DNA of thousands of juvenile Atlantic sturgeon and built a genetic family tree to identify the total number of parents that reproduced each year. This method is ideal for Atlantic sturgeon, as capturing juveniles is often easier than capturing adults, providing a new opportunity to estimate spawning population size.

“This genetics method is relatively new, and this is the first time it has been used to study Atlantic sturgeon,” Kazyak said. “Similar genetics-based approaches have been used with other species of sturgeon, such as lake sturgeon in the Great Lakes, but we needed to ensure that it would work for Atlantic sturgeon.”

This research project meets the science needs of many cooperators, including the Atlantic States Marine Fisheries Commission. This compact of states from Maine to Florida is responsible for coordinating state and federal conservation and recovery efforts for Atlantic sturgeon.

“This project demonstrates the effective science support partnership benefits between USGS and ASMFC as directed under the Atlantic Coastal Fisheries Cooperative Management Act,” said Tom O’Connell, Director of the USGS Eastern Ecological Science Center. “Results from this project will have a direct benefit in informing conservation of Atlantic sturgeon by state and federal managers working together under the auspices of the commission.”

The study was done in collaboration with the State University of New York-Oswego, Delaware Division of Fish and Wildlife, Delaware State University, and Environmental Research and Consulting, and was published in Ecological Applications: https://onlinelibrary.wiley.com/share/author/TSQSHAEEIQWZMEXJRKYP?target=10.1002/eap.2602 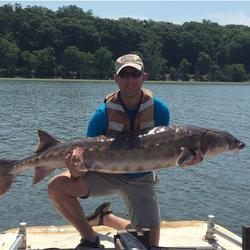 Atlantic sturgeon genetic assignment testing assigns individuals to populations and is combined with life history data to present a comprehensive view of the species.
Learn More