A report on the groundwater quality of Potter County is the latest of seven publications characterizing water quality of aquifers underlying central and northern tier counties. Wells were sampled throughout Potter County with funding support from Commonwealth Financing Authority through the Marcellus Legacy Fund.

Scientists collected samples from 47 domestic wells from May through September 2017. Sampling and analysis results provide rural citizens an improved understanding of the quality of their water supply while establishing a quality-assured, publicly available database of chemical characteristics against which future water-quality changes can be assessed.

Samples from the wells, which had depths ranging from 33 to 600 feet, were analyzed for concentrations of major ions, nutrients, bacteria, trace elements, volatile organic compounds (VOCs), ethylene and propylene glycol, alcohols, gross-alpha/beta-particle activity, uranium, radon-222, and dissolved gases. Groundwater quality generally met most drinking-water standards that apply to public water supplies. However, a percentage of samples exceeded maximum contaminant levels (MCLs) for total coliform bacteria (69.6 percent), Escherichia coli (30.4 percent), arsenic, and barium; and secondary maximum contaminant levels (SMCLs) for field pH, manganese, sodium, iron, total dissolved solids, aluminum, and chloride. All of the analyzed VOCs were below limits of detection and associated drinking water criteria. Radon-222 activities exceeded the proposed drinking-water standard of 300 picocuries per liter in 80.9 percent of the samples. The field pH of the groundwater ranged from 4.6 to 9.0. Generally, the lower pH samples had greater potential for elevated concentrations of dissolved metals, including beryllium, copper, lead, nickel, and zinc, whereas the higher pH samples had greater potential for elevated concentrations of total dissolved solids, sodium, fluoride, boron, and uranium.

Water from  45 of the wells had detectible concentrations of methane (greater than the 0.0002 milligrams per liter (mg/L)) detection limit but most were low (median concentration of 0.0018 mg/L). Of the 4 wells with elevated methane only one exceeded the Pennsylvania action level of 7 mg/L.  Wells with elevated concentrations of methane generally were associated with suboxic groundwater (dissolved oxygen less than 0.5 mg/L) that had near-neutral to alkaline pH with relatively elevated concentrations of iron, manganese, ammonia, lithium, fluoride, and boron. The isotopic and hydrocarbon compositions in five samples analyzed for methane isotopes suggest the methane may be of microbial origin or a mixture of thermogenic and microbial gas, but differed from the compositions reported for mud-gas logging samples collected during drilling of gas wells.

Samples with higher chloride concentrations had variable bromide concentrations and corresponding chloride/bromide ratios that are consistent with sources such as road-deicing salt and septic effluent (low bromide) or brine (high bromide). Brines are naturally present in deeper parts of the regional groundwater system and, in some cases, may be mobilized by gas drilling. It is also possible that valley wells were drilled close to or into the brine-freshwater interface, so brine signatures do not necessarily indicate contamination due to gas drilling. Approximately 50 percent of Potter County well-water samples, including two samples with the fourth (72.9 mg/L) and fifth (47.0 mg/L) highest chloride concentrations, have chloride/bromide ratios that indicate predominantly anthropogenic sources of chloride, such as road-deicing salt or septic effluent.

The full report is available here. 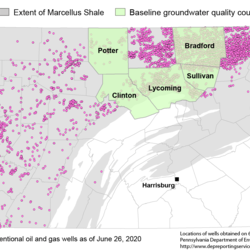 Most rural residents in Pennsylvania use groundwater from domestic supply wells for drinking, cleaning and other purposes. Some groundwater samples have been analyzed for private purposes, but those results generally are not readily available to the public. Many of the publicly available water-quality samples from rural areas were collected more than 30 years ago. Quality-assured groundwater...
By
Pennsylvania Water Science Center
link
September 1, 2020

Most rural residents in Pennsylvania use groundwater from domestic supply wells for drinking, cleaning and other purposes. Some groundwater samples have been analyzed for private purposes, but those results generally are not readily available to the public. Many of the publicly available water-quality samples from rural areas were collected more than 30 years ago. Quality-assured groundwater...
Learn More
October 30, 2019

This dataset contains the lithologic class and topographic position index information and quality-assurance and quality-control data not available in the online National Water Information System for 47 domestic wells sampled by the U.S. Geological Survey in Potter County, Pennsylvania, April-September 2017. The topographic position index (TPI) for each well location was computed on the basis of a
By
Pennsylvania Water Science Center, Pennsylvania Water Science Center
September 1, 2020

As part of a regional effort to characterize groundwater in rural areas of Pennsylvania, water samples from 47 domestic wells in Potter County were collected from May through September 2017. The sampled wells had depths ranging from 33 to 600 feet in sandstone, shale, or siltstone aquifers. Groundwater samples were analyzed for physicochemical properties that could be evaluated in relation to drin
By
Water Resources, Pennsylvania Water Science Center