A group of four Iraqi scientists landed in Sioux Falls, SD recently to begin taking the final steps toward the fulfillment of a goal set in motion a decade ago for the Middle Eastern nation: A data-rich, self-sustaining water resource monitoring program.

The journey began in 2009, when employees of the country’s Ministry of Water Resources were first trained in how to read and use assessments of rainfall, temperature, and snow-water equivalence generated by scientists at the U.S. Geological Survey Earth Resources Observation and Science (EROS) Center, located in Sioux Falls.

Since then, those data have come to serve a crucial function in Iraq, where the wise and timely release of water from a tightly controlled system of dams along the Tigris and Euphrates rivers is critical to the agricultural, power generation and drinking water needs of a country still rebuilding from years of unrest.

“When something is not there, I will get a call,” said Saud Amer, the USGS scientist who leads the U.S. State Department-funded training program from the Survey’s headquarters in Reston, VA. “They are honestly addicted to the data. The ministers, the Prime Minister, they rely on this data to regulate and monitor their reservoirs, as well as to negotiate water allocations.”

The arrival of the four scientists represents the start of a 2-year process to move the nation’s water specialists from consumers of data to producers and experts, capable of operating their own systems and training future generations of water resource engineers.

That ownership stake in the remote sensing science of water management is a key component of U.S. efforts to help the nation rebuild, Amer explains. Data access is useful, he says, but “if we want to do something good for Iraq, we need to equip them with this technology.”

The goal is to pass along not just information and skills, but a working knowledge of organizational best practices that will help current and future generations of water resource engineers thrive.

To that end, Zeyad Al-Saedi, Mohammed Tawfeeq, Hamdiea Skheel Alkhafaji, and Amal Abdulwahhab Dghemish began their four-week training with sessions on the use of satellite data, Python programming, the EROS-designed Simplified Surface Energy Balance (SSEBop) model for evapotranspiration (ET), and the generation of snow and climate data.

The September sessions are just a start. Four Iraqi professionals will come to EROS next year to learn how to estimate water volume in surface reservoirs with Landsat satellite data and elevation models. Training will also equip them to build a website to host Ministry-generated satellite data products.

“All of our systems are connected. When you talk about the hydrology, you must include the climate – precipitation, temperature – as well as the geology, the geography,” Al-Saedi said. “This whole system is working together. We cannot focus on one part and neglect the other.”

Iraq’s water is a thoroughly regulated resource. Most water for consumptive use, irrigation, and hydroelectricity generation is released from dams situated along the Tigris and Euphrates. Iraq has seven major dams within its borders, but the flow starts in other countries that have their own dam systems. Precipitation and snowpack estimates gathered over the Turkish basins upstream of the Tigris and Euphrates help guide Iraq’s leaders when the time comes to negotiate the release of water.

“When we go in to negotiate, we want to have scientifically-based information to bring to them,” Al-Saed said.

The ability to generate those assessments with satellite data is important because, as Amer says, “you cannot just go to a neighboring country and measure the water.”

Climate indicators and reservoir estimates from outside Iraq are only one part of the value satellite data can bring to a water resource manager. Wise use within Iraq’s borders is also a matter of measuring the efficiency.

That’s where ET comes into play. ET is a combined measurement of water lost through evaporation from the surface of the soil and transpiration from vegetation. The EROS SSEBop model can calculate that efficiency rating for large swaths of land using weather datasets and observations from sensors onboard orbiting satellites like Landsat and NASA’s Terra and Aqua.

In practice, broad-brush ET rates offer guidance on the amount of water that ought to be released for irrigation use on Iraq’s agricultural lands, and on how much might be held back for other purposes. While the Iraqi visitors are on site at EROS, they will generate a full year’s worth of ET rates with the assistance from USGS and contract staff. Once they return home, they’ll calculate current rates going forward, as well as look further back in time for historical trends.

Putting all the data – ET, climate indicators, and reservoir volume estimates – onto a Ministry website will make the information more widely available within the country.

The training doesn’t represent a hand-off, exactly, according to Mike Budde, a geographer at EROS who’s leading the training on the use of satellite data in the generation of snow cover and climate products. EROS will continue to produce climate products for Iraq for inclusion on its Early Warning website, But the training will pass ownership of the process on to a country that’s capable of doing the work itself, and perhaps facilitate the expansion and fine-tuning of products to suit its needs.

“One of the things they’ll come out with at the end is essentially a step-by-step manual that they can then take back,” said Budde. “If someone else needs to be trained, they can guide that person. It’s training the trainers, in some respects.”

Amer said that learning the EROS workflow and picking up best practices is an important reason this training, unlike the initial training a decade ago, is taking place within the United States. Hands-on experience working with other scientists will help them to model their resource management agency’s remote sensing program using a trusted model.

When the training is complete and all the tools are in place, he said, the Ministry will be able to tackle the large-scale water resource questions with authority and autonomy.

“They will be able to know, qualitatively, how much water is coming in (from neighboring countries), and then monitor the reservoirs, both inside Iraq and outside Iraq. They can use the ET to monitor water use efficiency and devise a system for the optimal use of their precious resources. Then, you come to the economic question of ‘am I using my water the best way I can?’” 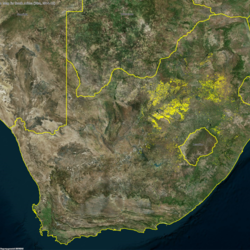 Brazilian officials tasked with managing their country’s water resources are working with staff at the Earth Resources Observation and Science (EROS)...