Brazilian officials tasked with managing their country’s water resources are working with staff at the Earth Resources Observation and Science (EROS) Center to better understand how that valuable asset is being used for agricultural irrigation in their homeland.

Four members of the Brazilian National Water Agency (ANA)—Thiago Fontenelle, Daniel Ferreira, Juliana Lopes, and Sergio Ayrimoraes—traveled to EROS in mid-October to discuss how remote sensing is used to map Brazil’s irrigated agricultural lands, and also how it can help to monitor and measure water used to raise crops. That’s vital knowledge for a country with nearly a fifth of the world’s water resources—especially since Brazil uses roughly 70 percent of its water supply for irrigation.

At EROS, the Brazilian contingent spent time with USGS Scientist Gabriel Senay and his colleagues—Mac Friedrichs, Stefanie Kagone, and Manohar Velpuri—learning more about the use of Senay's Operational Simplified Surface Energy Balance (SSEBop) model to monitor and measure water consumption. Along with local weather datasets for irrigated lands, SSEBop relies on satellite data to provide increasingly accurate and repeatable estimates of water that evaporates from the soil and vegetation surfaces, or is transpired from plants—what is commonly called evapotranspiration (ET).

Given its mission to guarantee water for the different water users in Brazil, Ayrimoraes, ANA's Superintendent, said his agency made a choice some time ago to use remote sensing for irrigation mapping and water use. “We have confirmed that this is a good option, a good choice,” he said. “Now there’s a lot of work to do, but with our discussions (with EROS) and this meeting, we know it’s the right way to go.”

As the world’s second-largest food exporter, Brazil is a country where agriculture and the agro-industry account for 8.4 percent of the gross domestic product. Its irrigated lands have been increasing exponentially in the past decade and, as a result, water consumption continues to rise.

Along with the irrigation component, ANA oversees 80 percent of the country’s hydrologic monitoring system. There are plenty of challenges in that work, given Brazil’s uneven distribution of water resources. Unreliable access to water in its semi-arid Northeast Region, coupled with recurrent and severe droughts, have substantially affected the living and health standards of rural populations there. Elsewhere, significant water pollution in and near large urban centers has affected health, damaged the environment, and increased water treatment costs.

Amidst growing competition for water within the country’s three river basins and two basin complexes, ANA officials find themselves in an intricate balancing act that involves authorizing water permits, monitoring the proper use of those permits, keeping track of hydrologic levels, analyzing and approving water requests, and providing water resource information for the entire country.

Senay’s SSEBop model is becoming an important part of that balancing act. “You can see if people are irrigating in amounts they are allowed to irrigate and estimate the amount of water they are using,” Fontenelle said. “And also, it helps us with planning. We have a big potential for expanding irrigation. We have this responsibility to have a good picture of the situation of water use in irrigated areas to help planning these expansions to be sustainable.”

Using Google Earth Engine, Senay, Brown, and their EROS colleagues were able to share their model and techniques with the Brazilians so that they can utilize them when they get back home. ANA already has some experience in mapping irrigated sugar cane, Brown said. With assistance from EROS, the plan is to help them expand that expertise.

“It’s a big job, and I think they’re excited to have multiple ways to look at (mapping),” Brown said. “It’s not like there’s going to be one way to do it, and you’re done. So, we’re going to be working with them, sharing techniques with them, to try and improve upon their mapping abilities.”

Having made an exploratory trip in 2015 to Atlanta and Washington, D.C., to investigate a potential partnership with USGS, Ayrimoraes said ANA began working with EROS and Senay’s SSEBop model in 2016. There’s now a three-year agreement in place that’s being funded by the Brazilian government and includes webinars, hands-on training, and visits like this one to the Center.

From a broader perspective, projects such as this that make key environmental data acquired by Landsat and other remote-sensing systems available to national and international partners like Brazil has long been important to USGS, Senay said. So is sharing proven techniques for improving the assessment of water resources that have regional and global implications, he said.

Beyond that, the work of USGS and EROS “also promotes the science of USGS around the world … creating linkages with universities and research institutes. It also gives U.S. companies a chance to get access to international opportunities,” Senay said, noting that the ANA visit to the United States this time included connecting with agro-industries, as well as water technology and monitoring companies.

There’s at least one more visit planned for the Brazilians back here in the U.S., and one more trip for EROS staff to travel to Brazil. It’s been a good relationship both ways, Senay said. His project benefits in that he’s able to expand the SSEBop model into a new place using previously unused satellite and weather data, with all the challenges that brings. For the Brazilians, there is that valuable knowledge to be gained and used in mapping and monitoring irrigated lands.

“When we meet with the people here (at EROS), they seem actually like colleagues that we work with daily,” Ayrimoraes said. “It doesn’t feel like we have a formal work agreement. It’s our colleagues that we talk to a lot and work with a lot. For us, it is a very good experience.” 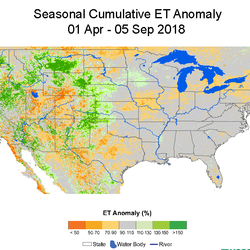 Evapotranspiration and Water Use Mapping

A planet with limited water resources needs accurate, reliable and frequently-updated tools to measure water use and plan for future needs. Scientists at EROS harness the remote sensing capabilities of satellite data to offer powerful tools that resource managers across the United States can use to gain insight into the water use needs of agricultural land, forests, and public green spaces.
By
Earth Resources Observation and Science Center, Earth Resources Observation and Science (EROS) Center
link
September 14, 2018

Evapotranspiration and Water Use Mapping

A planet with limited water resources needs accurate, reliable and frequently-updated tools to measure water use and plan for future needs. Scientists at EROS harness the remote sensing capabilities of satellite data to offer powerful tools that resource managers across the United States can use to gain insight into the water use needs of agricultural land, forests, and public green spaces.
Learn More