Arthur Medeiros is a researcher emeritus for PIERC, retiring in 2015 after over 20 years of federal service. Dr. Medeiros worked as a research botanist on Maui Island and was instrumental in the restoration of a Hawaiian dry forest in the Auwahi district of Haleakalā volcano. His efforts led to the recovery of multiple rare dry forest tree species and a 75% increase in native shrub cover. 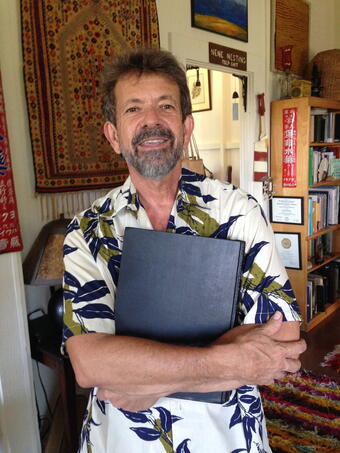 Globally, tropical dry forests are among the most diverse and threatened of ecosystems. Hawaiian dry forests are the most fragmented, reduced, and ecologically degraded ecosystems in the archipelago with less than 10% of their original area remaining. Despite this, Hawaiian dry forests remain important natural refugia. Culturally, dry forests are renowned by native Hawaiians for ethnobotanical source materials, especially durable hardwoods for tools and weapons, and species with utilitarian, medicinal or religious significance. Biologically, Hawaiian dry forests harbor high numbers of threatened plant species with more than 25% of Federally-listed Endangered Hawaiian plant species restricted to dry forest or dry scrub ecosystems. Loss and degradation of the patchwork of Hawaiian dry forest types has been caused by fire and the proliferation of non-native species, particularly feral and domestic ungulates, fire-adapted grasses, and rodent species. Without the development of more effective restoration strategies, most experts agree remaining examples of Hawaiian dry forests likely will be lost in the next 50-100 years. USGS is studying strategies for forest restoration at two sites on the island of Maui: Auwahi and Puu-o-kali.

Beginning in 1845, Auwahi’s forest understory was destroyed by cattle grazing and replaced by extensive stands of the invasive grass kikuyu grass Cenchrus clandestinus. By the late 1960s, approximately 95% of ca. 4000 ha of Auwahi dry forest on leeward Haleakala had been destroyed. The rarity of the Auwahi forest type and with its characteristically high tree diversity (49 species) combined with continued forest decline and the troubling long-term (50-100 years) failure of native tree reproduction prompted a regional biological inventory to describe Auwahi as a ‘museum forest’, i.e. a high diversity forest lacking recruitment.

In 1997, USGS-PIERC and landowner Ulupalakua Ranch with U.S. Fish and Wildlife Service funding initiated a restoration project with the goal of evaluating restoration using ungulate exclusion, weed control, and mass planting native shrub-tree seedlings. The second USGS-PIERC dry forest research restoration project, Puu-o-kali, is regarded as the best remaining example of low elevation dry forest in the Hawaiian Islands. These lava flows are especially rich in biological diversity due to the historically low fire frequency and low cover of invasive plants. Prior to 2001, the endemic wiliwili (Erythrina sandwicensis) (Fabaceae), the dominant tree species of lower-elevation Hawaiian dry forests and the Puu-o-kali area, was virtually free from attacks by non-native insects.

Two recently introduced insect species now threaten the status of Hawaiian Erythrina sandwicensis forests: First detected in Hawaii in 2001, the African bruchid beetle Specularius impressithorax (Pic) (Coleoptera: Chrysomelidae: Bruchinae) became established on all main islands within two years. The erythrina gall wasp (EGW), Quadrastichus erythrinae (Hymenoptera: Eulophidae), believed native to Africa, was first detected in the U.S. on Oahu island in April 2005 and had spread to all main Hawaiian Islands in less than six months. EGW is currently a serious pest of ornamental and native Erythrina (coral trees) on five continents, including nearly the entire tropical and subtropical zones. In Hawaii, EGW has severely impacted the Hawaiian endemic Erythrina sandwicensis, a keystone species of low-elevation dryland forests and an important Hawaiian cultural and ethnobotanical resource. Thousands of individuals of Erythrina sandwicensis have died since 2005 throughout extensive stands in Hawaii due to EGW-induced foliar loss. The USGS-PIERC study site Puu-o-kali has become a primary site in documenting the devastating impacts of two invasive insect species on the keystone dry forest tree Erythrina sandwicensis.

The southern slopes of Haleakalā volcano, which form the bulk of Maui island, are notable for their former biological diversity and their current state of ecological degradation. Though one naturalist noted that formerly koa reached “the state of perfection” on southern Haleakalā, native koa watershed forests now occupy less than 11% of their former extents. An analysis of regional species loss in the Hawai‘i described leeward Haleakalā as the epicenter of extinction in the Hawaiian archipelago. In many areas, not only have native watershed forest been destroyed but large populations of feral goats (Capra hircus) have left extensive hardpan areas with high levels of erosion and sediment transfer. A former head of the State of Hawai‘i Division of Forestry and Wildlife, Michael Buck, has described this area as “Hawai‘i’s biggest embarrassment.”

In the 1980s through 1990s, PIERC led extensive biological surveys of leeward Haleakala which helped in developing familiarity and trust between biologists and regional landowners, especially private large ranches such as Ulupalakua and Haleakalā Ranches both of which harbor natural resources on a caliber potentially similar to National Parks. With growing communal appreciation of regional deforestation problems as well as the potential for regional solutions, USGS was a founding and signing partner to the 43,175 acre Leeward Haleakalā Watershed Restoration Partnership (LHWRP) (www.lhwrp.org).

In 2011, an especially diverse 1,500-acre section of forest on south Haleakalā at Kahikinui was designated a Natural Area Reserve (NAR), the State of Hawai‘i’s highest form of land protection. Part of the expressed rationale for the formation of the NAR was the reintroduction of the critically endangered forest passerine, the Maui parrotbill (Psuedonestor xanthophyrs).  The Maui Parrotbill is a specialized offshoot of the often nectar-feeding Hawaiian honeycreepers. It is listed as Endangered by the US Fish and Wildlife Service with current population estimates of less than 500 individuals and declining population trends. Many experts believe restored koa forest on southern Haleakalā at Kahikinui and Nakula is the best chance for survival for one of the rarest songbirds in the United States.

We summarize information on current distribution of the invasive lizard Chamaeleo jacksonii and predict its potential distribution in the Hawaiian Islands. Potential distribution maps are based on climate models developed from known localities in its native range and its Hawaiian range. We also present results of analysis of stomach contents of a sample of 34 chameleons collected from native, pred
By
Ecosystems, Pacific Island Ecosystems Research Center
September 12, 2011

Weeds of Hawaii’s lands devoted to watershed protection and biodiversity conservation: Role of biological control as the missing piece in an integrated pest management strategy

Coral reef resources in the territory of American Samoa face significant problems from overfishing, non-point source pollution, global warming, and continuing population growth and development. The islands are still relatively isolated relative to other parts of the Pacific and have managed to avoid some of the more devastating invasive species that have reached other archipelagoes. As a result, t
By
Ecosystems, Pacific Island Ecosystems Research Center
January 1, 2010

Analysis of long-term patterns of invasion can reveal the importance of abiotic factors in influencing invasion dynamics, and can help predict future patterns of spread. In the case of the invasive Argentine ant (Linepithema humile), most prior studies have investigated this species' limitations in hot and dry climates. However, spatial and temporal patterns of spread involving two ant populations
July 18, 2001

Interaction between the Hawaiian dark-rumped petrel and the Argentine ant in Haleakala National Park, Maui, Hawaii

The endemic biota of the Hawaiian islands is believed to have evolved in the absence of ant predation. However, it was suspected that this endemic biota is highly vulnerable to the effect of immigrant ants especially with regard to an aggressive predator known as the Argentine ant (Linepithema humile). First recorded in the Haleakala National Park on the island of Maui in 1967, this ant was believ
By
Ecosystems, Pacific Island Ecosystems Research Center