The 2015–16 El Niño was one of the most powerful of the last 145 years, according to a new coastal-erosion study by USGS scientists and colleagues from universities and state agencies.

This article is part of the March 2017 issue of the Sound Waves newsletter.

The 2015–16 El Niño was one of the most powerful of the last 145 years, according to a new coastal-erosion study by USGS scientists and colleagues from universities and state agencies.

Investigations of 29 beaches from Washington to southern California showed that winter beach erosion was 76 percent above normal, by far the highest ever recorded. Most beaches studied in California eroded beyond historical extremes. If severe El Niño events like that of 2015–16 become more common, as some studies indicate, this region, home to more than 25 million people, will become increasingly vulnerable to coastal hazards. Projected sea-level rise could make the problem worse.

The authors assessed seasonal changes on 29 beaches along approximately 2,000 kilometers (1,243 miles) of the U.S. West Coast. They made 3-D surface maps and cross-shore profiles using GPS topographic surveys, aerial lidar (an instrument that measures distance with laser light), and direct measurements of sand heights, combined with wave and water-level data at each beach, collectively spanning 1997–2016. Beaches typically erode in the winter, as large storm waves pull sand offshore. More moderate waves in the summer carry much of the sand back onto the beach. El Niño winters can produce larger waves that pull even more sand offshore, making the extent of erosion more severe.

“Wave conditions and coastal response were unprecedented for many locations during the winter of 2015–16. The winter wave energy equaled or exceeded measured historical maximums along the U.S. West Coast, corresponding to extreme beach erosion across the region,” said USGS geologist and lead author of the report Patrick Barnard.

The 2015–16 El Niño was one of the three strongest events ever recorded, along with El Niño winters of 1982–83 and 1997–98. While most beaches in California eroded beyond historical extremes, some beaches fared better. “The condition of the beach before the winter of 2015 strongly influenced the severity of erosion and the ability of the beach to recover afterward through natural replenishment processes,” said University of California, Santa Barbara marine ecologist and co-author David Hubbard.

Rivers are still the primary source of sand to California beaches, despite long-term reductions caused by extensive dam construction in the 20th century. But California was in the middle of a major drought in 2015–16, with low river flows that carried even less sand to the coast to help sustain beaches.

From a water resources perspective, this El Niño was largely considered a dud due to the unusually low rainfall, particularly in southern California, which received 70 percent less rainfall than in the last two big El Niños. However, the waves that attacked our coast, generated from storms across the north Pacific, were exceptional and among the largest ever recorded,” said Barnard. “Further, the lack of rainfall means the coastal rivers produced very little sand to fill in what was lost from the beaches, so recovery has been slow.”

According to Scripps Institution of Oceanography co-author Bonnie Ludka, “Artificial beach nourishments (mechanically imported sand) placed prior to the winter of 2015–16 also protected some southern California shorelines from retreating beyond landward extremes.”

Unlike California, many of the Pacific Northwest beaches had been gaining sediment in the years leading up to the 2015–16 El Niño, due, at least in part, to a series of mild winter storm seasons that reduced erosion. Although Pacific Northwest beaches were buffered from catastrophic damage, study co-author and Oregon State University coastal hazards expert Peter Ruggiero said, “Several beaches did experience significant retreat, and it may take a while for those beaches to rebuild. We're not completely recovered yet, and it may take years for some beaches to build back up. After the 1997–98 El Niño, it took some beaches a decade to recover.”

The full report, “Extreme oceanographic forcing and coastal response due to the 2015–16 El Niño,” was published online at http://doi.org/10.1038/ncomms14365 on February 14 in the journal Nature Communications.

The study's release triggered a flurry of media coverage, including a TV interview with lead author Barnard (http://sanfrancisco.cbslocal.com/video/3622579-usgs-el-nino-caused-record-amount-of-coastal-erosion/), several radio interviews (such as https://ww2.kqed.org/forum/2017/02/16/worst-erosion-in-150-years-hits-california-beaches-report-finds/), and numerous articles in media outlets around the U.S. (for example, http://www.latimes.com/science/sciencenow/la-sci-sn-el-nino-california-20170214-story.html) and overseas (such as http://www.france24.com/en/20170214-el-nino-gobbled-californias-beaches-study). 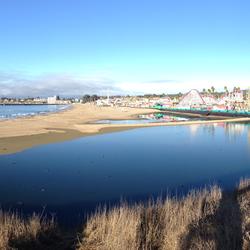 For beach towns around Monterey Bay, preserving the beaches by mitigating coastal erosion is vital. Surveys conducted now and regularly in the future will help scientists understand the short- and long-term impacts of climate change, El Niño years, and sea-level rise on a populated and vulnerable coastline.
By
Natural Hazards, Coastal and Marine Hazards and Resources Program, Pacific Coastal and Marine Science Center
link
May 25, 2021

For beach towns around Monterey Bay, preserving the beaches by mitigating coastal erosion is vital. Surveys conducted now and regularly in the future will help scientists understand the short- and long-term impacts of climate change, El Niño years, and sea-level rise on a populated and vulnerable coastline.
Learn More