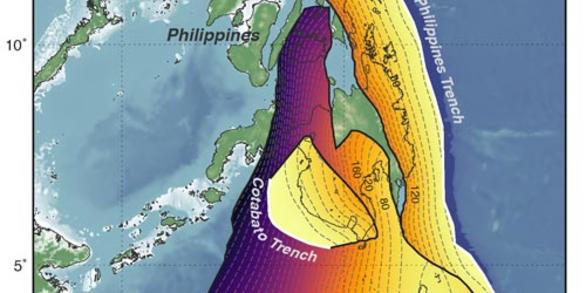 Ongoing data collections and popular collections. Add datasets, including those associated with publications, are listed below.

This dataset consists of shapefiles that are digitized contours of the structure of Cenozoic and late Cretaceous strata along the Gulf and Atlantic Coastal plains from Texas to New Jersey, not including Maryland and Delaware. Well depths and seismic profiles indicating depth to or elevation of subsurface geologic contacts present in some datasets have also been digitized. Metadata files (.xml) des
By
Earthquake Hazards, Geologic Hazards Science Center
August 19, 2020

A fundamental question in seismic hazard analysis is whether &amp;amp;lt;30?-dipping low-angle normal faults (LANFs) slip seismogenically. In comparison to more steeply dipping (45-60?) normal faults, LANFs have the potential to produce stronger shaking because of their increased possible rupture area in the seismogenic crust. While LANFs have been documented globally, examples of seismogenically
By
Earthquake Hazards
August 14, 2020

A time-lapse camera was used to document periodic reactivation of a complex landslide on a steep coastal bluff in Mukilteo, Washington. This landslide is one of four monitoring sites initiated by the U.S Geological Survey to investigate hill-slope hydrology and landslide hazards affecting the railway corridor along the eastern shore of Puget Sound between the cities of Seattle and Everett (Mirus e
By
Earthquake Hazards, Geologic Hazards Science Center
July 13, 2020

Comprehensive Global Database of Earthquake-Induced Landslide Events and Their Impacts

Currently, there are many datasets describing landslides caused by individual earthquakes, and global inventories of earthquake-induced landslides (EQIL). However, until recently, there were no datasets that provide a comprehensive description of the impacts of earthquake-induced landslide events. In this data release, we present an up-to-date, comprehensive global database containing all literatu
By
Earthquake Hazards, Geologic Hazards Science Center
July 13, 2020

This product is a collection of digital data that document fault rupture and ground-deformation features produced by the Ridgecrest M6.4 and M7.1 earthquake sequence of July 4 and 5, 2019. These datasets are described and more fully discussed in Ponti and others (2020) (see External Resources Section below for the full reference). Included in this collection are: GIS Shapefile and KMZ file of fi
By
Earthquake Hazards
June 29, 2020

Surface rupture associated with the 2019 Ridgecrest, California earthquake sequence includes the dominantly left-lateral and northeast-striking M6.4 rupture and dominantly right-lateral and northwest-striking M7.1 rupture. This data release includes surface-displacement observations of these ruptures made by teams of federal, state, academic, and private sector geologists between July and November
By
Earthquake Hazards
June 24, 2020

Inventory of landslides triggered by the 2020 Puerto Rico earthquake sequence

Lidar data were collected on 17 May 2017 at the USGS debris-flow flume (44.215, -122.254) to monitor the movement of a constructed landslide experiment. A static prism of sediment was emplaced behind a retaining wall at the top of the flume. Water was added via sprinklers to the surface and also via pipes to the subsurface, in order to saturate the sediment mass. The sediment mass eventually fa
By
Earthquake Hazards, Geologic Hazards Science Center
June 16, 2020

Estimated geospatial and tabular damages and vulnerable population distributions resulting from exposure to multiple hazards by the M7.0 HayWired scenario on April 18, 2018, for 17 counties in the San Francisco Bay region, California

This data release is comprised of geospatial and tabular data developed for the HayWired communities at risk analysis. The HayWired earthquake scenario is a magnitude 7.0 earthquake hypothesized to occur on the Hayward Fault on April 18, 2018, with an epicenter in the city of Oakland, CA. The following 17 counties are included in this analysis unless otherwise specified: Alameda, Contra Costa, Ma
By
Earthquake Hazards
June 16, 2020

The data in this data release are comprised of one geospatial vector dataset and three tabular datasets related to the HayWired earthquake scenario, a magnitude 7.0 earthquake hypothesized to occur on April 18, 2018, with an epicenter in the city of Oakland, CA. The geospatial vector data are a representation of identified economic subareas for use in selected analyses related to selected countie
By
Earthquake Hazards