The San Antonio Creek Valley watershed (SACVW) is located in western Santa Barbara County, about 15 miles south of Santa Maria and 55 miles north of Santa Barbara, California. The SACVW is about 135 square miles and encompasses the San Antonio Creek Valley groundwater basin; the SACVW is separated from adjacent groundwater basins by the Casmalia and Solomon Hills to the north, and the Purisima Hills to the south. At the western, downstream part of the valley, uplifted, consolidated rocks cause groundwater to discharge at land surface at Barka Slough. Since the late 1800s, groundwater has been the primary source of water for agricultural, military, municipal, and domestic uses. Groundwater withdrawal by pumping exceeded the amount of water replenishing the aquifer system during water years 1948–2018, causing groundwater-level declines of more than 150 feet in parts of the valley and reducing base flow at Barka Slough. Reliance on groundwater for agricultural water use (primarily for the irrigation and frost protection of vineyards, and fruit and berry crops) continues to strain the sustainability of the groundwater system.

Through a cooperative agreement, the Santa Barbara County Water Agency and Vandenberg Space Force Base invited the U.S. Geological Survey to address declines in groundwater levels, develop a better understanding of the hydrogeologic system, and provide tools to help evaluate and manage the effects of future development of the San Antonio Creek Valley groundwater basin within the encompassing San Antonio Creek Valley watershed (SACVW). The objectives of this study were to (1) refine the hydrogeologic framework of the San Antonio Creek Valley watershed, (2) quantify the hydrologic budget of the valley, and (3) develop hydrologic modeling tools to evaluate and aid in managing the groundwater resource. This report focuses on the first and second objectives to construct a hydrogeologic framework and characterize the historical and present-day hydrologic conditions of the SACVW during water years 1948–2018. As part of the second objective, work included quantifying the hydrologic budget and evaluating the hydrogeologic system using a combination of existing data and geologic and hydrologic data collected for this study.

The groundwater-flow system in the SACVW consists of five hydrogeologic units. These separate water-bearing units were identified based on hydrogeologic properties, such as sediment grain size, vertical-head differences in multiple-depth, monitoring-well sites, long-term groundwater level responses to pumping and climate, and the chemical character of groundwater and groundwater age in the mostly semi-consolidated to unconsolidated basin-fill sediments. The hydrogeologic units that comprise the different aquifers vary in their lithologic composition. The upper and lower aquifers (upper Paso Robles Formation, and lower Paso Robles Formation and Careaga Sandstone, respectively) are relatively coarse grained and are comprised of sand, gravel, and clay; the middle confining unit (the middle Paso Robles Formation) is relatively fine grained and is comprised of primarily clay, silt, and sand. The Pezzoni-Casmalia and Los Alamos faults, which are inferred to transect the SACVW between the western and eastern areas of the valley floor, do not appear to substantially affect the groundwater system.

Present-day recharge to the study area occurs primarily as infiltration from precipitation and streams in the upland areas of the Casmalia Hills and Solomon Hills, and along the main channel of San Antonio Creek. Reported estimates of annual natural recharge during water years 1948–2018 generally ranged from about 5,000 acre-feet to more than about 30,000 acre-feet. Stable and radioactive isotopes show that groundwater from the lower aquifer is old and probably was recharged as infiltration from precipitation and streams in the eastern upland areas of the Solomon Hills; however, the infiltration and recharge from these sources probably does not occur under present-day climatic conditions. Anthropogenic recharge, from sources such as return flow from agricultural irrigation, municipal water systems, and wastewater effluent, was estimated to range from about 600 acre-feet in 1948 to about 6,600 acre-feet in 2018. The average annual amount of groundwater removed from the SACVW by pumping during 1948–2018 was estimated to be about 17,200 acre-feet per year, increasing from about 3,000 acre-feet in 1948 to about 32,600 acre-feet in 2018. Estimates of annual pumpage generally exceeded estimates of annual recharge beginning in the mid-1970s and continuing through 2018. The predominant direction of groundwater flow under historical and present-day conditions was from the eastern uplands in the Solomon Hills to the west along San Antonio Creek to the discharge area in Barka Slough, and from the northern uplands in the Casmalia Hills south to San Antonio Creek.
Pumpage since the early 1900s and the subsequent groundwater-level declines have substantially reduced the amount of natural groundwater discharge at Barka Slough. Estimates of base flow to San Antonio Creek at the western, downstream extent of the SACVW have varied over time in response to changes in groundwater pumpage and climate; however, there was an overall decline in base flow during water years 1956–2018, decreasing from an average of about 1,700 acre-feet per year during 1956–69, to about 300 acre-feet per year during 2016–18. The long-term extraction of groundwater correlates with a decrease in groundwater levels by more than about 150 feet since the early 1940s in the eastern part of the basin near Los Alamos, and as much as about 50 feet in the upland areas and in the western part of the basin. At Barka Slough, groundwater levels have declined below land surface in some places, altering native riparian vegetation in and around the slough.

Surface-water quality in the SACVW varied depending on location and the time of year the samples were collected and on the amount of annual precipitation Most groundwater in the SACVW was calcium-bicarbonate-type water with total dissolved-solids concentrations of about 500–800 milligrams per liter generally representing water naturally recharged as infiltration from precipitation and streams. Total dissolved-solids concentrations in some wells ranged from 800 to 8,000 milligrams per liter, suggesting mixing of naturally recharged infiltrated water with water associated with oil-bearing geologic formations, agricultural products, or the evaporation of shallow groundwater. Concentrations of total dissolved solids and the chemical constituents chloride, nitrate plus nitrite (as nitrogen), calcium, and magnesium at selected wells generally increased during water years 1980–2018; increasing concentrations of these constituents may be associated with the expansion of agriculture in the watershed over time and the corresponding increase in the use of nitrates and calcium- and magnesium-based fertilizers and soil additives in modern agricultural practices.

The predominant direction of groundwater flow during historical and present-day conditions was from the eastern uplands in the Solomon Hills to the west along San Antonio Creek toward Barka Slough, and from the western uplands in the Casmalia Hills south to San Antonio Creek. The age of groundwater in the SACVW was evaluated using radioactive isotopes, and the flow of groundwater within the SACVW was evaluated using radioactive and stable isotopes. Modern groundwater (recharged after 1952) was generally found adjacent to San Antonio Creek and its tributaries in wells with perforated depths that averaged about 270 feet below land surface. Pre-modern groundwater (recharged before 1952) was found in wells that had average perforation depths of about 540 ft below land surface. Pre-modern groundwater identified in wells in the eastern upland area is interpreted to have had long, slow travel times to the western part of the SACVW where it was eventually discharged as base flow at Barka Slough or extracted as groundwater pumpage. 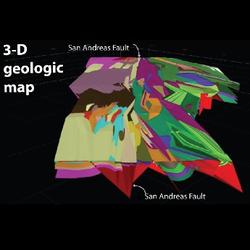 This project uses geologic and geophysical mapping to build an earth-science framework for scientific investigations that include assessments of critical resources, such as groundwater, and of hazards, such as those resulting from earthquakes, in California west of and including the Sierra Nevada and Cascade arc. Questions of particular interest include: What are the geometries, slip rates, and...
By
National Cooperative Geologic Mapping Program, California Water Science Center, Geology, Minerals, Energy, and Geophysics Science Center
link
December 10, 2018

This project uses geologic and geophysical mapping to build an earth-science framework for scientific investigations that include assessments of critical resources, such as groundwater, and of hazards, such as those resulting from earthquakes, in California west of and including the Sierra Nevada and Cascade arc. Questions of particular interest include: What are the geometries, slip rates, and...
Learn More
January 28, 2022