Changes in regional water management practices have reduced freshwater inflow to the Salton Sea, changing what was once a popular vacation destination to a shrinking hypersaline lake.  As the lake bed dries to a dusty playa, air, water, and wildlife managers will depend on careful monitoring and research to inform critical decisions affecting the future of the lake and surrounding communities.

The geonarrative, “A Desert on the Move”, addresses the geohazards present in the Salton Sea area. Beneath the Salton Sea is a network of active tectonic faults some of which have produced some of the largest earthquakes in California’s history.

State of the Salton Sea Report 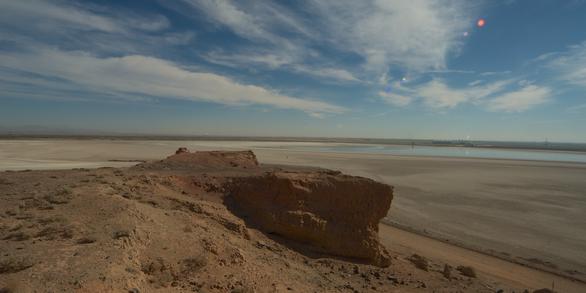 State of the Salton Sea 2017 Report

Summary from a 2014 workshop to review existing science and propose scientific studies and monitoring needs required for understanding how to retain the Salton Sea as a functional ecosystem. Click the link below to access the report.

At the Salton Sea Geothermal Field (SSGF), strain accumulation is released through seismic slip and aseismic deformation. Earthquake activity at the SSGF often occurs in swarm-like clusters, some with clear migration patterns. We have identified an earthquake sequence composed entirely of focal mechanisms representing an ambiguous style of faulting, where strikes are similar but deformation occurs
By
Natural Hazards, Earthquake Hazards, Earthquake Science Center
December 14, 2017

The Colorado River in the southwestern U.S. provides an excellent natural laboratory for studying the origins of a continent-scale river system, because deposits that formed prior to and during river initiation are well exposed in the lower river valley and nearby basinal sink. This paper presents a synthesis of regional stratigraphy, sedimentology, and micropaleontology from the southern Bouse Fo
By
Energy and Minerals, Energy Resources Program, Mineral Resources Program, National Laboratories Program, Science and Decisions Center, Geology, Minerals, Energy, and Geophysics Science Center
July 1, 2017

The San Andreas fault (SAF) is one of the most studied strike‐slip faults in the world; yet its subsurface geometry is still uncertain in most locations. The Salton Seismic Imaging Project (SSIP) was undertaken to image the structure surrounding the SAF and also its subsurface geometry. We present SSIP studies at two locations in the Coachella Valley of the northern Salton trough. On our line 4, a
By
Natural Hazards, Earthquake Hazards, Earthquake Science Center
END_OF_DOCUMENT_TOKEN_TO_BE_REPLACED