The cause and effect of acid rain

Water-Quality Data for the Nation

Depending on where you live, maybe you've heard of acid rain. Now, acid rain is not pure acid falling from the sky, but rather it is rainfall or atmospheric moisture that has been mixed with elements and gases that have caused the moisture to become more acidic than normal. Pure water has a pH of 7, and, generally, rainfall is somewhat on the acidic side (a bit less than 6). But, acid rain can have a pH of about 5.0-5.5, and can even be in the 4 range in the northeastern United States, where there are a lot of industries and cars.

Acidic precipitation can be caused by natural (volcanoes) and man-made activities, such as from cars and in the generation of electricity. The precursors, or chemical forerunners, of acid rain formation result from both natural sources, such as volcanoes and decaying vegetation, and man-made sources, primarily emissions of sulfur dioxide (SO2) and nitrogen oxides (NOx) resulting from fossil fuel combustion. The burning of fossil fuels (coal and oil) by power-production companies and industries releases sulfur into the air that combines with oxygen to form sulfur dioxide (SO2). Exhausts from cars cause the formation of nitrogen oxides in the air. From these gases, airborne sulfuric acid (H2SO4) and nitric acid (HNO3) can be formed and be dissolved in the water vapor in the air. Although acid-rain gases may originate in urban areas, they are often carried for hundreds of miles in the atmosphere by winds into rural areas. That is why forests and lakes in the countryside can be harmed by acid rain that originates in cities.

The environment can generally adapt to a certain amount of acid rain. Often soil is slightly basic (due to naturally occurring limestone, which has a pH of greater than 7). Because bases counteract acids, these soils tend to balance out some of the acid rain's acidity. But in areas, such as some of the Rocky Mountains and parts of the northwestern and southeastern United States, where limestone does not naturally occur in the soil, acid rain can harm the environment.

Some fish and animals, such as frogs, have a hard time adapting to and reproducing in an acidic environment. Many plants, such as evergreen trees, are damaged by acid rain and acid fog. I've seen some of the acid-rain damage to the evergreen forests in the Black Forest of Germany. Much of the Black Forest was indeed black because so much of the green pine needles had been destroyed, leaving only the black trunks and limbs! You also might notice how acid rain has eaten away the stone in some cities' buildings and stone artwork.

Acidity in rain is measured by collecting samples of rain and measuring its pH. To find the distribution of rain acidity, weather conditions are monitored and rain samples are collected at sites all over the country. The areas of greatest acidity (lowest pH values) are located in the Northeastern United States. This pattern of high acidity is caused by the large number of cities, the dense population, and the concentration of power and industrial plants in the Northeast. In addition, the prevailing wind direction brings storms and pollution to the Northeast from the Midwest, and dust from the soil and rocks in the Northeastern United States is less likely to neutralize acidity in the rain.

When you hear or read in the media about the effects of acid rain, you are usually told about the lakes, fish, and trees in New England and Canada. However, we are becoming aware of an additional concern: many of our historic buildings and monuments are located in the areas of highest acidity. In Europe, where buildings are much older and pollution levels have been ten times greater than in the United States, there is a growing awareness that pollution and acid rain are accelerating the deterioration of buildings and monuments.

Stone weathers (deteriorates) as part of the normal geologic cycle through natural chemical, physical, and biological processes when it is exposed to the environment. This weathering process, over hundreds of millions of years, turned the Appalachian Mountains from towering peaks as high as the Rockies to the rounded knobs we see today. Our concern is that air pollution, particularly in urban areas, may be accelerating the normal, natural rate of stone deterioration, so that we may prematurely lose buildings and sculptures of historic or cultural value.

Many buildings and monuments are made of stone, and many buildings use stone for decorative trim. Granite is now the most widely used stone for buildings, monuments, and bridges. Limestone is the second most used building stone. It was widely used before Portland cement became available in the early 19th century because of its uniform color and texture and because it could be easily carved. Sandstone from local sources was commonly used in the Northeastern United States, especially before 1900. Nationwide, marble is used much less often than the other stone types, but it has been used for many buildings and monuments of historical significance. Because of their composition, some stones are more likely to be damaged by acidic deposition than others. Granite is primarily composed of silicate minerals, like feldspar and quartz, which are resistant to acid attack. Sandstone is also primarily composed of silica and is thus resistant. A few sandstones are less resistant because they contain a carbonate cement that dissolves readily in weak acid. Limestone and marble are primarily composed of the mineral calcite (calcium carbonate), which dissolves readily in weak acid; in fact, this characteristic is often used to identify the mineral calcite.

How does acid precipitation affect marble and limestone buildings?

Acid precipitation affects stone primarily in two ways: dissolution and alteration. When sulfurous, sulfuric, and nitric acids in polluted air react with the calcite in marble and limestone, the calcite dissolves. In exposed areas of buildings and statues, we see roughened surfaces, removal of material, and loss of carved details. Stone surface material may be lost all over or only in spots that are more reactive.

You might expect that sheltered areas of stone buildings and monuments would not be affected by acid precipitation. However, sheltered areas on limestone and marble buildings and monuments show blackened crusts that have spalled (peeled) off in some places, revealing crumbling stone beneath. This black crust is primarily composed of gypsum, a mineral that forms from the reaction between calcite, water, and sulfuric acid. Gypsum is soluble in water; although it can form anywhere on carbonate stone surfaces that are exposed to sulfur dioxide gas (SO2), it is usually washed away. It remains only on protected surfaces that are not directly washed by the rain. Gypsum is white, but the crystals form networks that trap particles of dirt and pollutants, so the crust looks black. Eventually the black crusts blister and spall off, revealing crumbling stone.

Below are other science topics associated with acid rain. 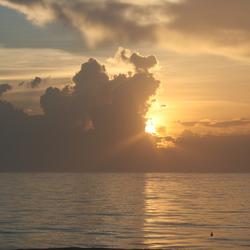 The USGS has been at the forefront of studying the impacts of acid rain for decades. How does acid rain form? What does it do to the landscape? Can it burn you like battery acid? Keep reading to find out more...
By
Water Resources
link
March 2, 2019

The USGS has been at the forefront of studying the impacts of acid rain for decades. How does acid rain form? What does it do to the landscape? Can it burn you like battery acid? Keep reading to find out more...
Learn More
link 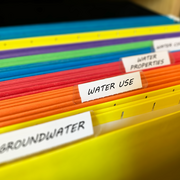 Water is everywhere, which is fortunate for all of humanity, as water is essential for life. Even though water is not always available in the needed quantity and quality for all people everywhere, people have learned to get and use water for all of their water needs, from drinking, cleaning, irrigating crops, producing electricity, and for just having fun.
link
August 30, 2018

Water is everywhere, which is fortunate for all of humanity, as water is essential for life. Even though water is not always available in the needed quantity and quality for all people everywhere, people have learned to get and use water for all of their water needs, from drinking, cleaning, irrigating crops, producing electricity, and for just having fun.
Learn More

Below are publications associated with acid rain.

The U.S. Geological Survey (USGS) has been actively studying acid rain for the past 15 years. When scientists learned that acid rain could harm fish, fear of damage to our natural environment from acid rain concerned the American public. Research by USGS scientists and other groups began to show that the processes resulting in acid rain are very complex. Scientists were puzzled by the fact that in
January 1, 1994

The effects of air pollution and acid rain on fish, wildlife, and their habitats-forests

The effects of air pollution and acid rain on fish, wildlife, and their habitats-rivers and streams

The effects of air pollution and acid rain on fish, wildlife, and their habitats-lakes

The effects of air pollution and acid rain on fish, wildlife, and their habitats-introduction

The effects of air pollution and acid rain on fish, wildlife, and their habitats-urban ecosystems

The erosion of carbonate stone by acid rain: Laboratory and field investigations