Mercury and the Aquatic Environment

Water Quality Data for the Nation

Mercury has got to be one of the most fascinating elements around. In looking at the bubbles of bright silver sitting on a flat surface, it is easy to see why mercury is also called "quicksilver." Mercury is the only metal that exists in liquid form. It may act somewhat like water, but it is nothing at all like water, especially in the potential harmful effects it can have on humans and ecosystems. 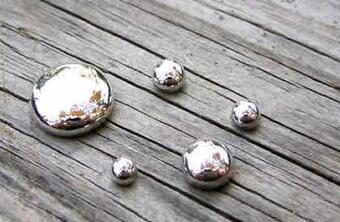 Mercury (Hg) is a naturally occurring metal found primarily in a mineral called cinnabar, which can contain up to 86 percent mercury. People have been extracting mercury from cinnabar since at least Roman times. Mercury is released through the natural weathering of rock and (or) volcanic activity.

However, the main source of mercury in the environment is from human activity through coal-combustion electrical power generation and industrial waste disposal (USGS, 2003). Once mercury is released to the environment, it can be converted to a biologically toxic form of methylmercury (MeHg) by microorganisms found in soil and in the aquatic environment.

Why is mercury a concern?

Mercury is extremely poisonous, and we can absorb it by touch, inhalation, or consumption. It builds up in the body with each exposure and is very difficult to remove. If you get too much in you, you can suffer from mercury poisoning, which is both unpleasant and potentially fatal.

Mercury is a concern because it is absorbed easily into the food chain. The harmful methylmercury form of mercury readily crosses biological membranes and can accumulate to harmful concentrations in the exposed organism and become increasingly concentrated up the food chain. In other words, tiny organisms can absorb mercury, and then tiny ocean fish eat those organisms, and then larger fish eat the smaller fish. This means that large fish that eat the smaller fish are actually eating the accumulated mercury contained in the accumulated fish. This bioaccumulation can cause high levels of mercury in top predator fishes (which people eat) and have a detrimental effect on humans and on fish-eating wildlife. Methylmercury levels in predatory fish are typically more than one million times higher than methylmercury levels in water that the fish inhabit.

Mercury and the waters in our ecosystems

Mercury is one of the most serious contaminants threatening our Nation’s waters because it is a potent neurological poison in fish, wildlife, and humans.  It is a global pollutant that ultimately makes its way into every aquatic ecosystem through one of two routes:

Are fish unsafe to eat? Where can I find information about the potential health effects?

Some fish may be unsafe to eat because of high mercury levels; however, fish are an important part of a healthy diet, so the best thing people can do is to become informed. The USEPA and FDA provide guidelines so that the public can make informed decisions about which fish species are safe to eat—these agencies recommend including fish as part of a healthy diet but urge us to choose kinds (species) of fish that are lowest in mercury. They also let us know which fish to minimize or avoid.

How does mercury get into lakes and streams?

Has mercury always been in fish? Is atmospheric mercury natural?

Although there has always been some mercury in the atmosphere from natural sources (volcanoes), human activities have increased the amount of mercury emitted to, and deposited from the atmosphere.  Anthropogenic (human-caused) sources of mercury to the atmosphere are largely from combustion of materials that contain mercury, with coal-combustion (electric utility boilers and commercial/industrial boilers) being the largest source in the U.S., according to the 1997 EPA Report to Congress.

In 2007, an international panel of experts concluded, “remote sites in both the Northern and Southern hemispheres demonstrates about a threefold (2X–4X) increase in Hg [mercury] deposition since preindustrial times” (Lindberg and others, 2007).  In the most remote parts of North America, for example lakes in Glacier Bay, Alaska, current rates of atmospheric mercury deposition are about double what was observed in pre-industrial times (Engstrom and Swain, 1997).  In the continental U.S., proximity to more mercury emission sources has resulted even larger increases—typically about three to four times pre-industrial rates (Lorey and Driscoll, 1999; Swain and others, 1992; Van Metre and Fuller, 2009).

Where do we find the highest fish-mercury concentrations?

Mercury can be detected in every fish analyzed, from virtually any water body. Mercury is a ubiquitous contaminant, and we are now very good at detecting low levels of mercury. For human and wildlife health, the concern is at what levels is mercury present, and where are fish with mercury levels of concern found?

High levels of mercury in fish are typically found in two general settings:

Below are data or web applications associated with aquatic mercury.

A new "fingerprinting" tool, developed by USGS and collaborators at University of Wisconsin-Madison, can now indicate sources of mercury.