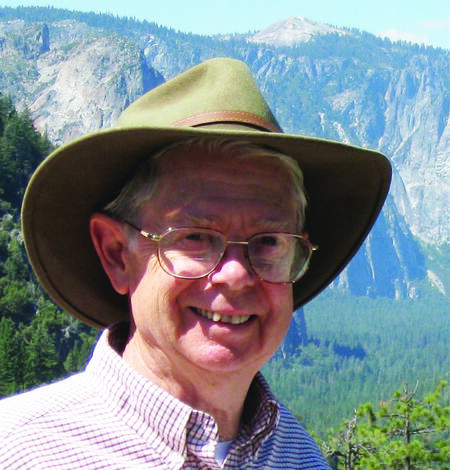 Carl obtained a Ph.D. degree from Stanford University in 1967, having joined the U.S. Geological Survey full time in Menlo Park, CA, in 1963. He retired in 2004 and has continued in emeritus status in the Menlo Park, CA, office since. His work over the past 55 years, mostly in California, has involved geologic mapping; study of landslide, fault and earthquake hazards; management of a national research program on hazards to power reactors; investigation of crustal structure using deep reflection profiling; study of a deep Quaternary basin and its cyclic record of climate variation; and study of the Franciscan Complex and its tectonostratigraphic terranes.

Deep (15-second) seismic reflection profiles CC-1 and CC-2 extending from the eastern California Coast Ranges across the Great Valley into the Sierran foothills at about latitude 37.25 Degrees N

This data release contains deep seismic reflection profiles CC-1 and CC-2, which extend eastward from within the California Coast Ranges across the Great Valley and into the Sierran foothills, with a combined east-west length of about 140 km at about the latitude of the town of Merced (37.25&deg; north latitude). The records are processed to 15 seconds two-way time and thus extend deep into th
By
National Cooperative Geologic Mapping Program, Geology, Minerals, Energy, and Geophysics Science Center
October 9, 2008

A three-dimensional (3D) geologic map of the Hayward Fault zone was created by integrating the results from geologic mapping, potential field geophysics, and seismology investigations. The map volume is 100 km long, 20 km wide, and extends to a depth of 12 km below sea level. The map volume is oriented northwest and is approximately bisected by the Hayward Fault. The complex geologic structure of
By
Geology, Minerals, Energy, and Geophysics Science Center, Geology, Geophysics, and Geochemistry Science Center
April 19, 2006

The rocks and fossils of the San Francisco Bay region reveal that the geology there is the product of millions of years at the active western margin of North America. The result of this history is a complex mosaic of geologic materials and structures that form the landscape. A geologic map is one of the basic tools to understand the geology, geologic hazards, and geologic history of a region.With
January 1, 1994

Structure contour map of the top of the Oligocene to Middle Miocene Temblor Formation in the Kettleman Hills and Lost Hills areas, Fresno, Kings, and Kern counties, California

This structure contour map shows the general structural configuration of the Cenozoic section in the area surrounding Kettleman Hills and Lost Hills.  It was compiled from electric well-log data available through April 1982 (Ammann Map Services, 1978; Petroleum Information Corporation, 1982; California Division of Oil and Gas, 1982) and from surface geology (Dibblee, 1971; 1973).
January 1, 1994

Structure contour map of the tops of the Kreyenhagen Formation and Cretaceous strata in the Coalinga area, Fresno and Kings counties, California

This structure contour map, originally compiled during a study of the 1983 Coalinga earthquakes, shows the general structural configuration of the upper several kilometers of section in the Coalinga area. It was compiled by using electric well-log data available through April 1982 (Ammann Map Services, 1978; Petroleum Information Corporation, 1982; California Division of Oil and Gas, 1982) and sur
January 1, 1994

Serious errors and inconsistencies in the article undermine many of its interpretations to the point that principal conclusions are not valid. Much dependence is placed on the maximum depositional age (Dmax) of sandstone units based on zircon analysis of 10 samples, but calculation of those Dmax values is flawed, and their use confuses maximum with actual depositional ages and makes age distinctio
By
National Cooperative Geologic Mapping Program, Geology, Minerals, Energy, and Geophysics Science Center
April 1, 2017

The Evergreen basin and the role of the Silver Creek fault in the San Andreas fault system, San Francisco Bay region, California

The Evergreen basin is a 40-km-long, 8-km-wide Cenozoic sedimentary basin that lies mostly concealed beneath the northeastern margin of the Santa Clara Valley near the south end of San Francisco Bay (California, USA). The basin is bounded on the northeast by the strike-slip Hayward fault and an approximately parallel subsurface fault that is structurally overlain by a set of west-verging reverse-o
By
Energy and Minerals, Energy Resources Program, Mineral Resources Program, National Laboratories Program, Science and Decisions Center, Geology, Minerals, Energy, and Geophysics Science Center
January 7, 2016

Paleomagnetic study of cores from six deep wells provides an independent temporal framework for much of the alluvial stratigraphy of the Quaternary basin beneath the Santa Clara Valley. This stratigraphy consists of 8 upward-fining cycles in the upper 300 m of section and an underlying 150 m or more of largely fine-grained sediment. The eight cycles have been correlated with the marine oxygen isot
By
Energy and Minerals, Energy Resources Program, Mineral Resources Program, National Laboratories Program, Science and Decisions Center, Groundwater and Streamflow Information Program, Geology, Minerals, Energy, and Geophysics Science Center
April 7, 2015

Physical subdivision and description of the water-bearing sediments of the Santa Clara Valley, California

A summary of the late Cenozoic stratigraphic and tectonic history of the Santa Clara Valley, California

Santa Clara Valley is bounded on the southwest and northeast by active strike-slip and reverse-oblique faults of the San Andreas fault system. On both sides of the valley, these faults are superposed on older normal and/or right-lateral normal oblique faults. The older faults comprised early components of the San Andreas fault system as it formed in the wake of the northward passage of the Mendoci
By
Energy and Minerals, Energy Resources Program, Mineral Resources Program, National Laboratories Program, Science and Decisions Center, Geology, Minerals, Energy, and Geophysics Science Center
October 11, 2013

Estimates of the dip, depth extent, and amount of cumulative displacement along the major faults in the central California Coast Ranges are controversial. We use detailed aeromagnetic data to estimate these parameters for the San Gregorio–San Simeon–Hosgri and other faults. The recently acquired aeromagnetic data provide an areally consistent data set that crosses the onshore-offshore transition w
August 7, 2012

The northwest-trending Silver Creek Fault is a 40-km-long strike-slip fault in the eastern Santa Clara Valley, California, that has exhibited different behaviors within a changing San Andreas Fault system over the past 10-15 Ma. Quaternary alluvium several hundred meters thick that buries the northern half of the Silver Creek Fault, and that has been sampled by drilling and imaged in a detailed se
By
Energy and Minerals, Energy Resources Program, Mineral Resources Program, National Laboratories Program, Science and Decisions Center, Geology, Minerals, Energy, and Geophysics Science Center
January 1, 2010