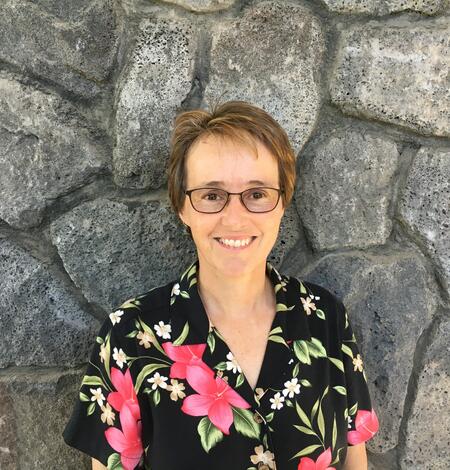 I have 38 years of experience as a USGS volcanologist. As the Volcano Science Center Director, I oversee the work of 170 employees at five U.S. volcano observatories and the Volcano Disaster Assistance Program. I am responsible for science and operational planning; workforce development; improving diversity, equity, inclusion, and accessibility; and preparing the USGS for U.S. volcanic eruptions.

I have worked for the USGS on various aspects of volcanology, eruption response, and hazard assessment and risk mitigation since 1983. I was introduced to volcanoes in college looking at Viking Orbiter images of Olympus Mons on Mars. My first Earthly volcano was Mount St. Helens where I spent the summer of 1982 studying small-volume pyroclastic flow deposits from 1980. I learned about lava and volcano monitoring as an assistant geologist at the Hawaiian Volcano Observatory in the early days of the Pu`u`O`o eruption and mapped the summit and southwest rift zone of Kīlauea Volcano as part of the Big Island Geologic Mapping Project working for Ed Wolfe. In 1985, I spent a month at sea on an ALVIN expedition to the active propagating rift system near the Galapagos at 95.5W.

I moved to the new Alaska Volcano Observatory in 1990 where I participated in eruption response and physical volcanologic studies at Redoubt, Spurr, Augustine, Okmok, and other Aleutian volcanoes. My science focus was illuminating eruptive histories at Aniakchak and Okmok calderas, characterizing young pyroclastic deposits and processes, and hazard assessment. I developed strong interests and experience in managing volcano hazard information, developing warning systems, interagency coordination, and volcanic ash and aviation hazards.  For some time, I led collaboration between the Alaska Volcano Observatory and colleagues in Kamchatka and Sakhalin to expand Russian eruption warning systems.

I served as the first USGS Geoscience Advisor to USAID's Office of U.S. Foreign Disaster Assistance (1998-2000) where I developed and facilitated programs supporting disaster mitigation abroad. From 2009-2010, I completed two details to the USGS Western Regional Office as Chief of Staff and Deputy Regional Director. In 2011-2012, I represented the Volcano Hazards Program and Science Center during development of the USGS Hazards Mission Strategic Science Plan.

I served as Scientist-in-Charge of the Hawaiian Volcano Observatory from 2015-2020, overseeing a staff of 30 and managing response to the 2018 lower East Rift Zone eruption and summit collapse of Kīlauea.  During my tenure, I focused on hiring a new generation of HVO scientists, planning for new facilities and science initiatives following Congressional funding in the aftermath of the 2018 event, and preparing for a Mauna Loa eruption.

I returned to Alaska in 2020 and became Center Director in May 2021. My focus at this time is preparing for growth that may occur as part of the Congressionally authorized National Volcano Early Warning System and ensuring adequate support for our workforce to carry out the VSC goals to better understand volcanic processes and hazards, and provide timely guidance and information to help protect lives and property.

Geologic Map of the Summit Region of Kilauea Volcano, Hawaii

This report consists of a large map sheet and a pamphlet. The map shows the geology, some photographs, description of map units, and correlation of map units. The pamphlet gives the full text about the geologic map. The area covered by this map includes parts of four U.S. Geological Survey 7.5' topographic quadrangles (Kilauea Crater, Volcano, Ka`u Desert, and Makaopuhi). It encompasses the su
Filter Total Items: 88
June 1, 2020

During the 2005 summer field season, geologists Michelle Coombs, Christina Neal, and Jessica Larsen from the University of Alaska, Fairbanks and the U.S. Geological survey, Alaska Volcano Observatory (AVO) conducted fieldwork on Little Sitkin Island in the western Aleutians of Alaska. The primary purpose of the fieldwork was to install geophysical networks for volcano monitoring. As part of this e
By
Volcano Hazards, Volcano Science Center
February 24, 2020

Kīlauea Volcano, Hawai‘i, is renowned as one of the most active and closely monitored volcanoes on Earth. Scores of seismometers and deformation sensors form an array across the volcano to detect subsurface magmatic activity, and ground observers track eruptions on the surface. In addition to this dense ground-based monitoring, remote sensing – both airborne and spaceborne – has become a backbone
By
Volcano Hazards, Volcano Science Center
July 19, 2018

The Ukinrek Maars erupted 30 March to 9 April 1977, forming two maars, a line of small pit craters and a tephra blanket extending to ~2 km from the vents. We combine photographic and written observations with stratigraphic analysis to reconstruct the eruption. The eruption began with very low (a few meters high) fountaining from small craters above an inferred east-west-trending dike, creating loc
By
Volcano Hazards, Volcano Science Center
February 13, 2018

Semisopochnoi Island, located in the Rat Islands group of the western Aleutian Islands and Aleutian volcanic arc, is a roughly circular island composed of scattered volcanic vents, the prominent caldera of Semisopochnoi volcano, and older, ancestral volcanic rocks. The oldest rocks on the island are gently radially dipping lavas that are the remnants of a shield volcano and of Ragged Top, which is
By
Volcano Hazards, Volcano Science Center
October 5, 2017

In March 2008, a new volcanic vent opened within Halemaʻumaʻu, a crater at the summit of Kīlauea Volcano in Hawaiʻi Volcanoes National Park on the Island of Hawaiʻi. This new vent is one of two ongoing eruptions on the volcano. The other is on Kīlauea’s East Rift Zone, where vents have been erupting nearly nonstop since 1983. The duration of these simultaneous summit and rift zone eruptions on Kīl
By
Volcano Hazards, Volcano Science Center
September 6, 2017

2014 volcanic activity in Alaska: Summary of events and response of the Alaska Volcano Observatory

The Alaska Volcano Observatory (AVO) responded to eruptions, possible eruptions, volcanic unrest or suspected unrest, and seismic events at 18 volcanic centers in Alaska during 2014. The most notable volcanic activity consisted of intermittent ash eruptions from long-active Cleveland and Shishaldin Volcanoes in the Aleutian Islands, and two eruptive episodes at Pavlof Volcano on the Alaska Peninsu
By
Volcano Hazards, Volcano Science Center
December 31, 2016

High stand and catastrophic draining of intracaldera Surprise Lake, Aniakchak volcano, Alaska: A section in <i>Geologic studies in Alaska by the U.S. Geological Survey, 1993</i>

Wave-cut terraces and multiple exposures of lacustrine sediment indicate a former, more extensive stand of intracaldera Surprise Lake in the crater of Aniakchak volcano. The lake once covered nearly half of the caldera floor and had an estimated volume of about 3.7x109 m3. A terrace that marks the high stand of the lake is traceable along the north caldera wall to a break in slope near the top of
By
Ecosystems, Volcano Hazards, Volcano Science Center, Alaska Science Center
February 1, 2016

Lava flow crises are nothing new on the Island of Hawai‘i, where their destructive force has been demonstrated repeatedly over the past several hundred years. The 2014–2015 Pāhoa lava flow crisis, however, was unique in terms of its societal impact and volcanological characteristics. Despite low effusion rates, a long-lived lava flow whose extent reached 20 km (the longest at Kīlauea Volcano in th
By
Volcano Hazards, Volcano Science Center
January 31, 2016

At the foot of the smoking mountains: The 2014 scientific investigations in the Islands of the Four Mountains

An interdisciplinary research team conducted archaeological, geological, and biological investigations in the Islands of the Four Mountains, Alaska during the summer of 2014 as part of a three-year project to study long-term geological and ecological patterns and processes with respect to human settlement. Researchers investigated three archaeological sites on Chuginadak Island (SAM-0014, SAM-0016
By
Volcano Hazards, Volcano Science Center
Filter Total Items: 59
link
June 18, 2020

The extraordinary leadership of Tina Neal as Scientist-in-Charge (SIC) of the USGS Hawaiian Volcano Observatory (HVO) comes to an end this week, when...

Volcano Watch — HVO people and jobs, Part 2: Who and what is the Scientist-in-Charge?

Since the Hawaiian Volcano Observatory (HVO) was founded by the visionary Dr. Thomas A. Jaggar in 1912, a senior scientist has been responsible for...

On July 25, 2019, a helicopter pilot flying a U.S.Geological Survey mission over Kīlauea noticed an unusual green patch at the bottom of Halema‘uma‘u...

A year ago, USGS Hawaiian Volcano Observatory scientists and Island of Hawai‘i residents were in the throes of an historically unprecedented series of...

The team at the U.S. Geological Survey Hawaiian Volcano Observatory is one of several finalists nominated for the 2019 Service to America Medals.

Volcano Watch - What caused—or did not cause—the 2018 Kīlauea eruption?

When a major geologic event occurs, scientists who study such events and the people who are directly or indirectly impacted by it seek to understand...

January 2019 marks the 10th annual “Volcano Awareness Month” on the Island of Hawai‘i.

In 1902, Thomas A. Jaggar, a geologist and founder of the Hawaiian Volcano Observatory (HVO), visited the scene of one of the most deadly volcanic...

Since the morning of August 4, 2018, activity at Kīlauea Volcano's summit and its lower East Rift Zone (LERZ) has diminished dramatically—and the...

When volcanic gases are released into the atmosphere, resulting plumes sometimes appear to have a faint color. Is this color indicative of a certain...