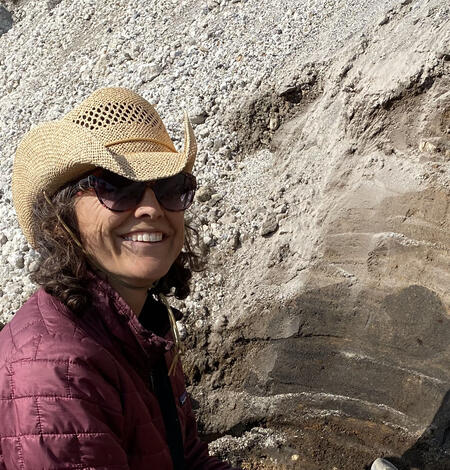 I'm a volcanologist, igneous geochemist, and petrologist. I study how, and where, magmas are stored and how they evolve (change in composition) before and during eruption. To answer these questions, I use the characteristics and chemical compositions of eruptive products, at both small-volume volcanoes (cinder cones, maars) and larger volcanoes like Mount St. Helens.

My PhD research, and much of my subsequent work, used the analysis of melt inclusions – tiny bits of melt trapped in crystals growing at depth in a magma – to constrain the pre-eruptive volatile (H2O, CO2, Cl, S) and major and trace element geochemistry of the melt. During my PhD, I studied basaltic cinder cone eruptions of the Michoacan-Guanajuato Volcanic Field (MGVF) of Mexico. I investigated changing magma compositions during long-lived cinder cone eruptions – like those of Jorullo and Paricutin – and how these related to changes in the magma plumbing systems and eruption styles. I sampled many cinder cones throughout the MGVF and modeled the mantle and subduction contributions to these magmas.

I then moved to Australia, to complete a postdoc at the University of Tasmania in Hobart, where my work focused on large caldera-forming eruptions of the Taupo Volcanic Zone in New Zealand. I used mineral and melt compositions and volatile contents to determine depths of magma storage, extents of magma evolution, and behavior of metals and volatiles prior to eruption.

Later, I moved to New Mexico for a part-time position at New Mexico State University. There, my students and I worked on a range of projects, including investigating the spatial and temporal evolution of caldera-forming rhyolitic eruptions in southern New Mexico and the recent eruption of Kilbourne Hole maar in the southern Rio Grande Rift. I also continued research on Blue Lake crater in the Oregon Cascades, where I used melt inclusion geochemistry and diffusion chronometry to determine the storage history and ascent rates of the magma that fed this eruption. During this time I was also awarded an NSF grant to study mafic magmas of the southern Cascade arc. My students and I sampled basaltic tephras and lavas of the Cascades between northern California and central Oregon. We analyzed the geochemical compositions of these lavas, as well as sea floor sediments offshore of northern California, and used the results to model mantle and subduction contributions to the magmas.

In 2020, I moved back to the pacific northwest to start my current position as a research geologist at the Cascades Volcano Observatory. I am currently working on several projects, including using mineral and melt geochemistry to understand the pre-eruptive conditions of explosive mafic eruptions from Mount St. Helens and investigating the temporal-spatial evolution of the eruptions of the Twin Lakes-Wuksi Butte chain in central Oregon. The overarching aim of my research is to help prepare for future eruptions by: 1) providing a better understanding of the storage conditions and ascent rates of magmas before and during eruption, and 2) assessing variations in eruption styles over time.