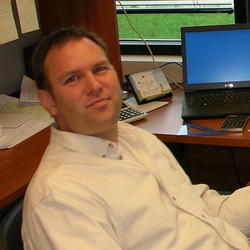 Jason Lambrecht is currently the Assistant Director and Chief of the Hydrologic Data Section with the Nebraska Water Science Center (NE WSC). Jason received his Bachelor of Science in Biology from the University of North Dakota in 1992 and went to work for the USDA-ARS as a Biological Science Laboratory Technician in Grand Forks and Fargo, ND until 1998.  While working with the USDA, he returned to academia in 1996 and earned his Bachelor of Science in Civil Engineering from North Dakota State University in 1998.  He began working as a Hydraulic Engineer with the North Dakota Water Science Center in Grand Forks in 1999, and became the Grand Forks Field Office Chief in 2004.  In 2009, he took on the role of Associate Director of Data managing Nebraska Hydrologic Surveillance Network operations at the NE WSC in Lincoln, Nebraska. In 2016, he became Assistant Director of the NE WSC.

Reporters: Do you want to accompany a USGS field crew as they measure flood impacts? Please contact Marisa Lubeck or Jason Lambrecht to coordinate.