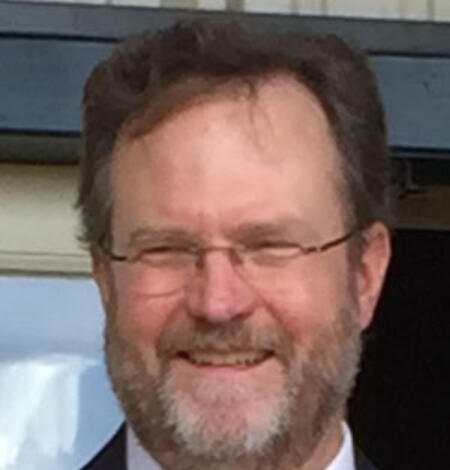 Ken Herkenhoff is a Scientist at Astrogeology Science Center.

Ken Herkenhoff has been interested in astrophotography since he was a child, and now specializes in imaging Mars.  His love of the outdoors led him to study geology and earn a Bachelor’s degree in that subject at the University of California, Berkeley in 1981.  After working for a few months in a geostatistics group at Fluor Mining and Metals, he returned to school to study planetary science at Caltech.  He recalibrated the Mariner 9 cameras and used the improved images to study the south polar layered deposits on Mars, which are thought to record climate variations on Mars that are similar to ice ages on Earth.  He earned a doctorate in Planetary Sciences at Caltech in 1989.

Ken was a post-doctoral researcher at the Jet Propulsion Laboratory in Pasadena for two years, where he continued geologic mapping of the south polar region of Mars and studied the photometry of Mars and its satellites.  He was hired as a research scientist at JPL in 1991 and became involved in several planetary missions, including Mars Observer, Cassini, and Mars Pathfinder.  The success of Mars Pathfinder and its Sojouner rover led to his involvement in the Mars Exploration Rover missions as science lead for the Microscopic Imagers.  These larger rovers landed on Mars in January 2004; Opportunity explored Mars until a global dust storm ended its mission in 2018.  In 1998 he moved from JPL to the U. S. Geological Survey’s Astrogeology Science Center in Flagstaff, Arizona, where he currently works as a research geologist.   Ken is a Co-Investigator on the High Resolution Imaging Science Experiment on the Mars Reconnaissance Orbiter mission, and on the Mars Science Laboratory Mastcam/MAHLI/MARDI and ChemCam science teams.  MSL landed on August 5, 2012 and continues to explore Gale crater on Mars.  He is also a Co-Investigator on the Mars 2020 rover Mastcam-Z science team.

Ken has published hundreds of papers and abstracts as first or co-author on various topics including the impact origin of Upheaval Dome (Utah), light scattering in Mars’ atmosphere, and Phobos photometry.  But most of his work has focused on the design, calibration, and operation of cameras on Mars spacecraft.

The polar deposits on Mars probably record martian climate history over the last 107 to 109 years (for example, Thomas and others, 1992). The area shown on this map includes polar layered deposits and polar ice, as well as some outcrops of older, underlying terrain. This quadrangle was mapped using Viking Orbiter images in order to study the relations among erosional and depositional processes on
By
Natural Hazards, Astrogeology Science Center
March 1, 2001

Introduction The polar deposits on Mars probably record martian climate history over the last 107 to 109 years (for example, Thomas and others, 1992). The area shown on this map includes layered polar deposits and residual polar ice, as well as some exposures of older terrain. Howard and others (1982) noted that an area (at lat 84.8 S., long 356 W.) near a 23-km diameter impact crater (Plaut an
By
Natural Hazards, Astrogeology Science Center
July 1, 1998

The polar deposits on Mars are of great interest because they probably record martian climate variations (Thomas and others, 1992). The area shown on this map includes polar layered deposits with distinct low-albedo features and a sharp boundary between the layered deposits and the moderately cratered unit that forms the floor of Chasma Australe. Detailed mapping of this quadrangle was undertaken
By
Natural Hazards, Astrogeology Science Center
Filter Total Items: 141
January 19, 2022

IntroductionThis report summarizes the software and algorithms that are used to calibrate images returned by the High Resolution Imaging Science Experiment (HiRISE) camera onboard the Mars Reconnaissance Orbiter (MRO) spacecraft. The instrument design and data processing methods are summarized below, followed by a description of relevant calibration data and details of the calibration procedure. I
By
Natural Hazards, Astrogeology Science Center
July 3, 2021

Mars exhibits diverse surface changes at all latitudes and all seasons. Active processes include impact cratering, aeolian sand and dust transport, a variety of slope processes, changes in polar ices, and diverse effects of seasonal CO2 frost. The extent of surface change has been surprising and indicates that the present climate is capable of reshaping the surface. Activity has important implicat
By
Natural Hazards, Astrogeology Science Center
April 30, 2021

1. The North Polar Layered Deposits contain thousands of ice layers that record accumulation and climate history for at least several million years, making the most accessible and most complete climate record aside from the Earth’s – and the only one to record the impact of large obliquity shifts. 2. Mars Polar Science is a diverse and integrated system spanning much of the planet, above and below
By
Natural Hazards, Astrogeology Science Center
April 8, 2021

The Curiosity rover is exploring Hesperian-aged stratigraphy in Gale crater, Mars, where a transition from clay-bearing units to a layered sulfate-bearing unit has been interpreted to represent a major environmental transition of unknown character. We present the first description of key facies in the sulfate-bearing unit, recently observed in the distance by the rover, and propose a model for cha
By
Natural Hazards, Astrogeology Science Center
February 15, 2021

This paper provides an overview of Mars Exploration Rover Spirit Microscopic Imager (MI) operations and the calibration, processing, and analysis of MI data. The focus of this overview is on the last five Earth years (2005–2010) of Spirit's mission in Gusev crater, supplementing the previous overview of the first 450 sols of the Spirit MI investigation. Updates to radiometric calibration using in‐
By
Natural Hazards, Astrogeology Science Center
May 30, 2018

The NASA Curiosity rover Mast Camera (Mastcam) system is a pair of fixed-focal length, multispectral, color CCD imagers mounted ~2 m above the surface on the rover's remote sensing mast, along with associated electronics and an onboard calibration target. The left Mastcam (M-34) has a 34 mm focal length, an instantaneous field of view (IFOV) of 0.22 mrad, and a FOV of 20° × 15° over the full 1648
By
Natural Hazards, Astrogeology Science Center
September 1, 2017

In situ detection of boron by ChemCam on Mars

We report the first in situ detection of boron on Mars. Boron has been detected in Gale crater at levels
By
Natural Hazards, Astrogeology Science Center
July 17, 2017

In 1960, Eugene Shoemaker and a small team of other scientists founded the field of astrogeology to develop tools and methods for astronauts studying the geology of the Moon and other planetary bodies. Subsequently, in 1962, the U.S. Geological Survey Branch of Astrogeology was established in Menlo Park, California. In 1963, the Branch moved to Flagstaff, Arizona, to be closer to the young lava fl
By
Natural Hazards, Astrogeology Science Center
August 1, 2016

The stratigraphy of the layered deposits of the polar regions of Mars is theorized to contain a record of recent climate change linked to insolation changes driven by variations in the planet's orbital and rotational parameters. In order to confidently link stratigraphic signals to insolation periodicities, a description of the stratigraphy is required based on quantities that directly relate to i
By
Natural Hazards, Astrogeology Science Center
July 28, 2016

ChemCam activities and discoveries during the nominal mission of the Mars Science Laboratory in Gale crater, Mars

At Gale crater, Mars, ChemCam acquired its first laser-induced breakdown spectroscopy (LIBS) target on Sol 13 of the landed portion of the mission (a Sol is a Mars day). Up to Sol 800, more than 188 000 LIBS spectra were acquired on more than 5800 points distributed over about 650 individual targets. We present a comprehensive review of ChemCam scientific accomplishments during that period, togeth
By
Natural Hazards, Astrogeology Science Center