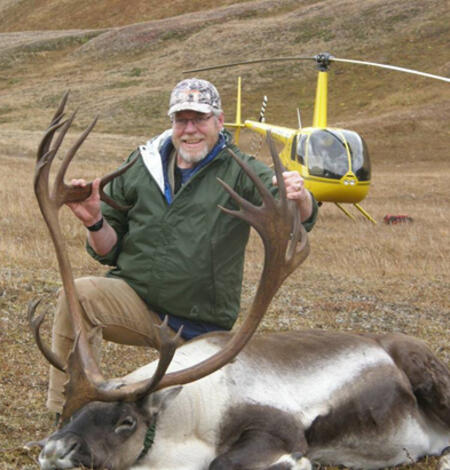 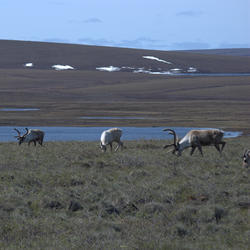 Understanding the population dynamics, predator/prey relationships and habitat ecology of terrestrial mammals, such as caribou and muskoxen, is critical for the management of these species and their habitats in Alaska.
By
Ecosystems, Species Management Research Program, Alaska Science Center
link
July 13, 2017

Understanding the population dynamics, predator/prey relationships and habitat ecology of terrestrial mammals, such as caribou and muskoxen, is critical for the management of these species and their habitats in Alaska.
Learn More
December 19, 2018

Serological Data on Influenza A from Birds and Mammals on the Arctic Coastal Plain of Northern Alaska, 2011-2017

These data (in two spreadsheets) are the results of screening for influenza A viruses (IAV) in blood from wild animals that utilize the Arctic region of Alaska. 758 blood samples from nine wildlife species (3 mammal, 6 waterbird) were collected in Arctic Alaska, 2011-2017. Two different tests were used and the results are presented in separate spreadsheets. All blood samples were screened for IAV
By
Alaska Science Center
June 12, 2018

Tularemia is an infectious zoonotic disease caused by one of several subspecies of Francisella tularensis bacteria. Infections by F. tularensis are common throughout the northern hemisphere and have been detected in more than 250 wildlife species. In Alaska, US, where the pathogen was first identified in 1938, studies have identified F. tularensis antibodies in a diverse suite of taxa, including i
By
Ecosystems, Alaska Science Center
September 20, 2022

Investigators have speculated that the climate-driven “greening of the Arctic” may benefit barren-ground caribou populations, but paradoxically many populations have declined in recent years. This pattern has raised concerns about the influence of summer habitat conditions on caribou demographic rates, and how populations may be impacted in the future. The short Arctic summer provides caribou with
By
Ecosystems, Alaska Science Center
August 4, 2021

Spatiotemporal variation in forage is a primary driver of ungulate behavior, yet little is known about the nutritional components they select, and how selection varies across the growing season with changes in forage quality and quantity. We addressed these uncertainties in barren-ground caribou (Rangifer tarandus), which experience their most important foraging opportunities during the short Arct
By
Ecosystems, Alaska Science Center
April 21, 2020

Muskoxen are a key species of Arctic ecosystems and are important for food security and socio-economic well-being of many Indigenous communities in the Arctic and Subarctic. Between 2009 and 2014, the bacterium Erysipelothrix rhusiopathiae was isolated for the first time in this species in association with multiple mortality events in Canada and Alaska, raising questions regarding the spatiotempor
By
Ecosystems, Alaska Science Center
December 18, 2019

Caribou use of habitat near energy development in Arctic Alaska

Increasing demands for energy have generated interest in expanding oil and gas production on the North Slope of Alaska, raising questions about the resilience of barren-ground caribou populations to new development. Although the amount of habitat lost directly to energy development in the Arctic will likely be relatively small, there are significant concerns about habitat that may be indirectly im
By
Ecosystems, Species Management Research Program, Alaska Science Center
September 12, 2019

Predation is a major limiting factor for most small sedentary caribou (Rangifer tarandus) populations, particularly those that are threatened or endangered across the southern extent of the species’ range. Thus, reducing predation impacts is often a management goal for improving the status of small caribou populations, and lethal predator removal is the primary approach that has been applied. Give
By
Ecosystems, Alaska Science Center
December 18, 2018

Survey of Arctic Alaskan wildlife for influenza A antibodies: Limited evidence for exposure of mammals

Influenza A viruses (IAVs) are maintained in wild waterbirds and have the potential to infect a broad range of species, including wild mammals. The Arctic Coastal Plain of Alaska supports a diverse suite of species, including waterfowl that are common hosts of IAVs. Mammals co-occur with geese and other migratory waterbirds during the summer breeding season, providing a plausible mechanism for int
By
Ecosystems, Alaska Science Center
January 23, 2018

Summary of wildlife-related research on the coastal plain of the Arctic National Wildlife Refuge, Alaska, 2002–17

We summarize recent (2002–17) publicly available information from studies within the 1002 Area of the Arctic National Wildlife Refuge as well as terrestrial and coastal ecosystems elsewhere on the Arctic Coastal Plain that are relevant to the 1002 Area. This report provides an update on earlier research summaries on caribou (Rangifer tarandus), forage quality and quantity, polar bears (Ursus marit
By
Ecosystems, Species Management Research Program, Alaska Science Center
March 1, 2017

Advancing the match-mismatch framework for large herbivores in the Arctic: Evaluating the evidence for a trophic mismatch in caribou

Climate-induced shifts in plant phenology may adversely affect animals that cannot or do not shift the timing of their reproductive cycle. The realized effect of potential trophic “mismatches” between a consumer and its food varies with the degree to which species rely on dietary income and stored capital. Large Arctic herbivores rely heavily on maternal capital to reproduce and give birth near th
By
Ecosystems, Alaska Science Center
January 1, 2017

Sexual segregation occurs frequently in sexually dimorphic species, and it may be influenced by differential habitat requirements between sexes or by social or evolutionary mechanisms that maintain separation of sexes regardless of habitat selection. Understanding the degree of sex-specific habitat specialization is important for management of wildlife populations and the design of monitoring and
By
Ecosystems, Alaska Science Center
November 1, 2016

Understanding how dispersal patterns are influenced by landscape heterogeneity is critical for modeling species connectivity. Resource selection function (RSF) models are increasingly used in landscape genetics approaches. However, because the ecological factors that drive habitat selection may be different from those influencing dispersal and gene flow, it is important to consider explicit assump
By
Ecosystems, Alaska Science Center
link
December 18, 2019

The Other 364 Days of the Year: The Real Lives of Wild Reindeer

Caribou, North America’s wild reindeer, have lives apart from their famous role on Christmas Eve. To learn more about how  these Arctic antler-bearers...

Caribou Appear to Keep up with Warming Arctic

Despite recent changes to the growing season for plants in the Arctic, Alaska, caribou appear to have remained in sync with these changes over the...