My career started in 1985 with the New York District in Albany, NY and continues in the New York Water Science Center in Troy, NY. Recent projects include the Great Lakes Nowcast data collection, Go2Mapper back-end support, Go2Fast Predicted data analysis and various tools to assist our Data Program. Maintaining our NWIS Dialer has been ongoing.

Hired in 1985 on a temporary WAE appointment, I wowed the DIS management team with my knowledge of the Prime mini-computer systems. Subsequent appointments were sponsored by DIS, where I participated in the SIGMON and SIGTEL groups, offered assistance with Prime Computer issues and worked on developing drivers for accessing Maxtor devices from the Primes.  I also provided programming support for Fortran developers.

I was eventually hired back by the New York District office to provide IT support in Albany. During that time, I developed tools for the Data Section to produce formatted Annual Data Report pages to be published (PSSPOOL) as well as applications to manipulate external data for use by the section.

I helped implement the use of Intel PCs within the District's Library and later the Administrative, Projects and Data sections.

As Unix systems became more wide-spread, the Prime systems were consolidated and eventually phased out. Administering the DG, and later, Sun platforms became a primary responsibility. Many of the tools were ported to the Unix environment and maintained by Me. As Non-GOES data was becoming more prolific, I helped develop a system to allow the collection of data from differing devices through a common system (NWIS Dialer). This allowed the District to collect the data in a single process rather than implementing separate tasks from each vendor. The design for our NWIS Dialer was converted from C++ to Python by the Maryland District and was eventually returned to NY for ongoing development.

I have developed many supplemental tools and scripts to help the WSC Data sections process collected data.

The New York and Ohio NowCast beach modeling system was developed by several programmers in NY. The third-party data collection system and field data entry pages have proven very popular with the beach managers, saving them much time by automatically collecting and storing public data that they once had to manually collect. This data is then used in the VirtualBeach model and the results stored in the NowCast database.  The NowCast mapper webpages, developed in NY by Martyn Smith, provides this information visually to the public.

Automated creation of the site_text files available to offices within NwisWeb has been a long-term project. Information is collected from various sources and assembled into the files included in the Real-time site pages. Automation has made it easier to maintain these files.

Various collectors have been implemented for the Program staff, including collection from NERRS, MesoNet, NGWOS and NRCC.

Support for Go2 and the Go2 Mapper have been ongoing.  An additional related project, called Go2Fast, performs some of the Go2 tests on predicted data, allowing for the planning of field trips based on the AHPS and NWM data sets. 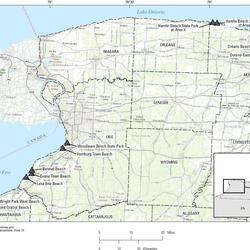 Problem – Currently, swim advisories or closings are issued by beach managers based on standards for concentrations of bacterial indicators such as Escherichia coli (E. coli). Standard culture methods for these bacteria take at least 18-24 hours before results are available. At most Great Lakes beaches, the beach is posted with an advisory or closing or is determined to be acceptable for swimm
By
New York Water Science Center
link
October 20, 2015

Problem – Currently, swim advisories or closings are issued by beach managers based on standards for concentrations of bacterial indicators such as Escherichia coli (E. coli). Standard culture methods for these bacteria take at least 18-24 hours before results are available. At most Great Lakes beaches, the beach is posted with an advisory or closing or is determined to be acceptable for swimm
Learn More