What is Earth MRI?

Minerals are a part of our daily lives. Critical minerals, sometimes referred to as strategic and critical, are mineral commodities that are vital to the economy, security of the United States, renewable-energy, and emerging electronics technologies. Publications by USGS geologists highlight the potential for undiscovered domestic sources of these critical minerals in Alaska.

Alaska is still a frontier with respect to geologic investigation and has high potential for holding undiscovered mineral resources. In many cases, mineral deposits that have already been discovered or mined also contain additional “critical” mineral commodities that are drawing new attention nationally. These critical mineral resources are defined as non-fuel mineral or mineral material that are essential to the economic or national security of the United States and which has a supply chain vulnerable to disruption. In 2022, the USGS identified 50 critical mineral commodities based on directives from the Energy Act of 2020. In some cases, critical minerals such as graphite, zinc, or rare earth elements make up the main part of a deposit and are the chief commodities of interest. In other cases, critical minerals like tungsten, bismuth, or tellurium are present in lower concentrations than the main commodities of interest (e.g., gold or copper) but could still be recovered as byproducts or coproducts during mining. Reducing U.S. import reliance on these critical commodities requires a better understanding of the potential domestic supply. New geologic data are needed to help us understand the geologic controls on critical mineral concentrations and where favorable geologic environments and, ideally, undiscovered resources, might occur.

In 2017, Executive Order 3359 directed the USGS to develop the first formal list of critical minerals and to develop a national strategy to improve the topographic, geological, and geophysical mapping of the United States in support of critical mineral assessment, exploration, and development. In response, the USGS Mineral Resources Program started the Earth Mapping Resources Initiative (Earth MRI) in partnership with the American Association of State Geologists to conduct new geological and geophysical mapping across the nation. Alaska is one of four priority regions under Earth MRI, and USGS Alaska Science Center geologists began working with the Alaska Division of Geological & Geophysical Surveys (ADGGS) to identify areas that are prospective for critical mineral resources. This effort produced two reports (linked below) that define more than 100 focus areas in the state that have potential for one or more critical mineral commodities in the state. The Yukon-Tanana upland of eastern interior of Alaska was chosen as the first priority for new data collection because of its demonstrated mineral resource potential, its geologic diversity, and its proximity to existing infrastructure. Since 2019, more than $1M has been granted annually from the USGS to the ADGGS to fund new airborne geophysical surveys, geologic mapping, and geochemical analyses. Additional funding provided by the bipartisan Infrastructure Investment and Jobs Act increased the annual investment in Alaska critical minerals work and data collection. This work will be conducted in other priority areas such as the Seward Peninsula of western Alaska and the Kuskokwim Mountains region of southwestern Alaska.

To date, the ADGGS has contracted airborne geophysical surveys covering more than 160,000 line kilometers and 50,000 square kilometers (more than 19,000 square miles) of interior Alaska. Detailed geologic mapping and geochemical sampling in the same regions is producing an unprecedented amount of new information, and USGS and ADGGS researchers are working together to synthesize the new information and develop new, updated assessments of critical mineral potential. This work will continue and extend into other regions and focus areas of Alaska in the future and will ultimately produce a comprehensive, modern, data-rich understanding of Alaska’s critical mineral resources. This information will be used by policy-makers, land managers, and private stakeholders to help determine Alaska’s potential for increasing domestic reserves of these important commodities and helping to reduce U.S. import reliance. 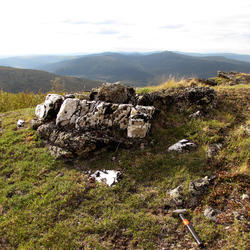 Our objective is to provide a strategic framework for planning, coordination, and execution of the USGS Earth Mapping Resources Initiative (Earth MRI) in Alaska. Earth MRI aims to improve knowledge of the U.S. geologic framework through new geological and geophysical mapping and to identify areas that have the potential to contain undiscovered critical mineral resources.
By
Mineral Resources Program, Alaska Science Center
link
September 25, 2019

Our objective is to provide a strategic framework for planning, coordination, and execution of the USGS Earth Mapping Resources Initiative (Earth MRI) in Alaska. Earth MRI aims to improve knowledge of the U.S. geologic framework through new geological and geophysical mapping and to identify areas that have the potential to contain undiscovered critical mineral resources.
Learn More
May 1, 2020

Earth MRI began in 2019 and is a partnership between the USGS and State Geological Surveys to acquire new geologic maps, geophysical surveys, and LiDAR data to better understand the fundamental geologic framework of areas across the Nation with potential for hosting critical mineral resources.