With its vast size and geographic position at the northern end of several migration pathways, Alaska is a critically important site for the world’s shorebirds. Thirty-seven shorebird species regularly breed in Alaska. Most of these species conduct epically long migrations to take advantage of Alaska’s abundant food resources and breeding habitat, making Alaska a global resource for shorebirds. Shorebird research at the USGS Alaska Science Center improves our knowledge of shorebirds and addresses key questions for management agencies about the distribution and abundance of these species.

Research on the population status and ecology of shorebirds in Alaska focuses on identifying critical phases of the annual cycle for these species. Because ninety percent of the migratory shorebird species in the Western Hemisphere have breeding populations in Alaska, our current research necessarily incorporates work that describes migratory routes and connections between Alaska and sites around the globe where these species stopover or spend the nonbreeding season. Such studies require large-scale, collaborative efforts that employ a variety of techniques to gain perspectives appropriate to the scale and range of these highly migratory species. Information from these studies is guiding conservation efforts and helping scientists and conservation groups to better understand the effects of global-scale threats to shorebirds, including habitat modification and degradation, climate change, and the spread of infectious diseases.

Species scientists are working with include:

There are four species of godwits distributed around the world, three of which breed in Alaska: Bar-tailed, Hudsonian, and Marbled Godwits. Bar-tailed Godwits are considered a Bird of Conservation Concern by the US Fish and Wildlife Service due to their small population size, threats to their non-breeding grounds (especially at migratory stopover sites in the Yellow Sea), and their relatively restricted breeding distribution within the United States.

The Bristle-thighed Curlew breeds only at two disjunct locations in western Alaska, and has a broad, low-density distribution across atolls and islands in the Pacific Basin during the nonbreeding season.  Its adult population numbers about 7,000 individuals, making it the rarest of the New World curlews and godwits. Due to their small population and threats to their nonbreeding grounds related primarily to sea-level rise and invasive species, the Bristle-thighed Curlew is a listed as a Bird of Conservation Concern by the US Fish and Wildlife Service.

The Long-billed Curlew is the largest shorebird in North America. The species is considered a Bird of Conservation Concern by the US Fish and Wildlife Service due to the species' small population size, recent population declines, and threats to the species' breeding and non-breeding grounds.

Whimbrels closely resemble Bristle-thighed Curlews. Whimbrels are widely distributed at high-latitude breeding sites around the world, but Alaska-breeding Whimbrels are restricted to sites within the Pacific Flyway. These long-distance migrants are distributed at wintering sites from California to southern Chile. 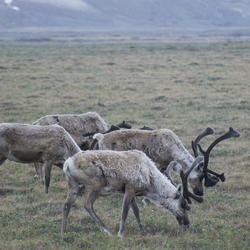 Arctic regions of Alaska are important for cultural and economic sustainability and host a wide variety of wildlife species, many of which are of conservation and management interest to the U.S. Department of the Interior. The USGS and collaborators provide information about Arctic ecosystems that are used by Arctic residents, management agencies, and industry.
By
Ecosystems, Land Management Research Program, Species Management Research Program, Alaska Science Center
link
August 13, 2018

Arctic regions of Alaska are important for cultural and economic sustainability and host a wide variety of wildlife species, many of which are of conservation and management interest to the U.S. Department of the Interior. The USGS and collaborators provide information about Arctic ecosystems that are used by Arctic residents, management agencies, and industry.
Learn More

Measurements of Shorebird Chicks in Alaska and Canada, 1997-2022

This dataset consists of shorebird chick measurements (wing, primary feather 10, tarsus, and bill length) and body mass for various shorebird species in Alaska and Canada, 1997-2022. Researchers with the U.S. Geological Survey have studied the reproductive ecology of shorebirds at numerous sites across Alaska.
By
Alaska Science Center
May 4, 2022

Inventory Data of Lowland-Breeding Birds and Associated Vegetation Types on the Alaska Peninsula, 2004-2007

These are data from a stratified random survey to inventory the birds breeding in lowlands (elevation below 100m) of the Alaska Peninsula, during summers 2004-2007. Data were collected at 792 points on 52 5-km x 5-km plots. The data are in six tables: 1) geographic coordinates of the bounding corners of each of the 52 plots, 2) geographic coordinates of each of the 792 bird count points, 3) counts
By
Alaska Science Center
January 19, 2022

These data are in one table and document the numbers of four species of shorebird counted during aerial surveys of coastal sites in western Alaska. Survey regions encompassed coastline between the mouths of the Kuskokwim and Yukon rivers, and the northern coast of the Alaska Peninsula from the mouths of the Kvichak and Naknek Rivers to Nelson Lagoon. Surveys were flown from 7-9 September 2018 and
By
Alaska Science Center
January 4, 2022

These morphometric data are in two tables from surfbirds (adults and chicks) captured at two locations in southcentral Alaska, 1997-1999.
By
Alaska Science Center
December 16, 2020

This dataset contains nesting information for birds breeding at a site on the Colville River, Alaska, 2011-2018. Nests were located during area searches conducted by biologists, and standardized information on each nest was collected following protocols of the Arctic Shorebird Demographic Network (Brown et al. 2014).
By
Alaska Science Center
May 20, 2020

This data set contains information (in two tables) on nesting habitat and nest survival for American (Pluvialis dominica) and Pacific (P. fulva) Golden-Plovers monitored at seven study sites across an elevational gradient (28-416 m) on the Seward Peninsula in northwestern Alaska during the summers of 2012 and 2013. We used principal components analysis to reduce habitat measurements into two compo
By
Alaska Science Center
May 30, 2019 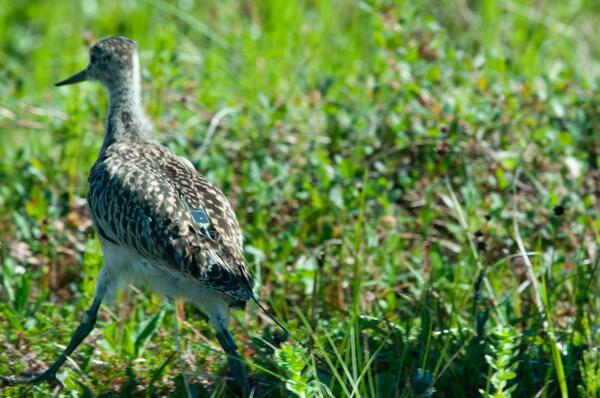 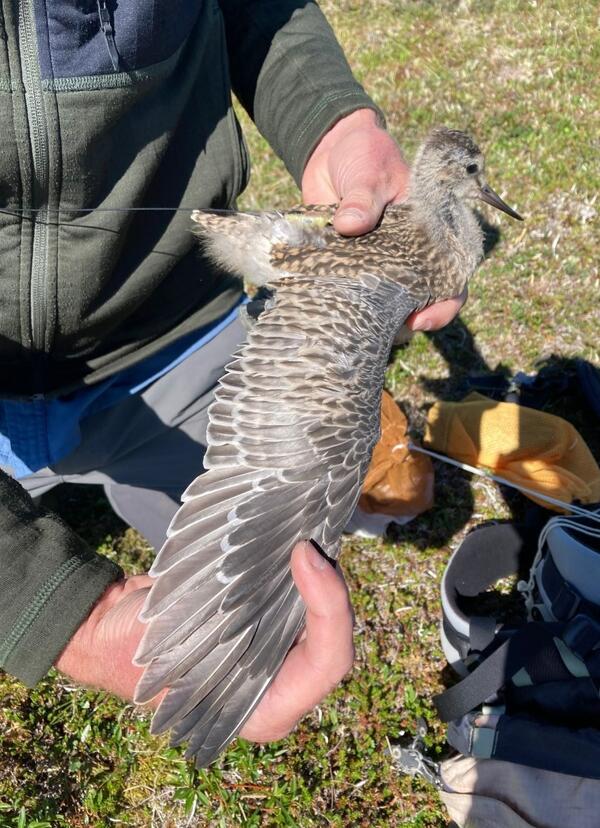 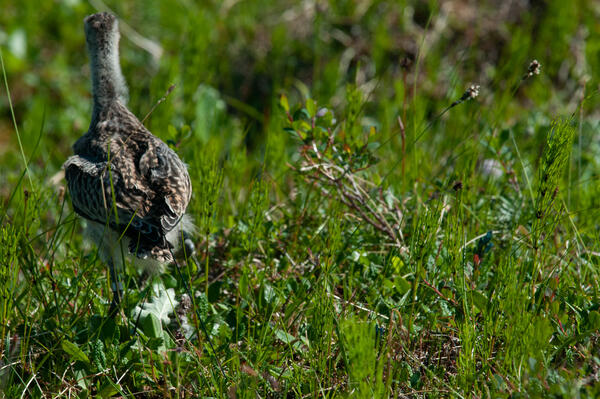 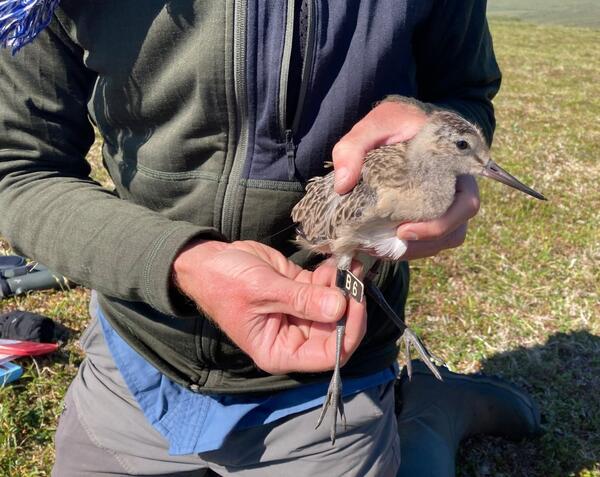 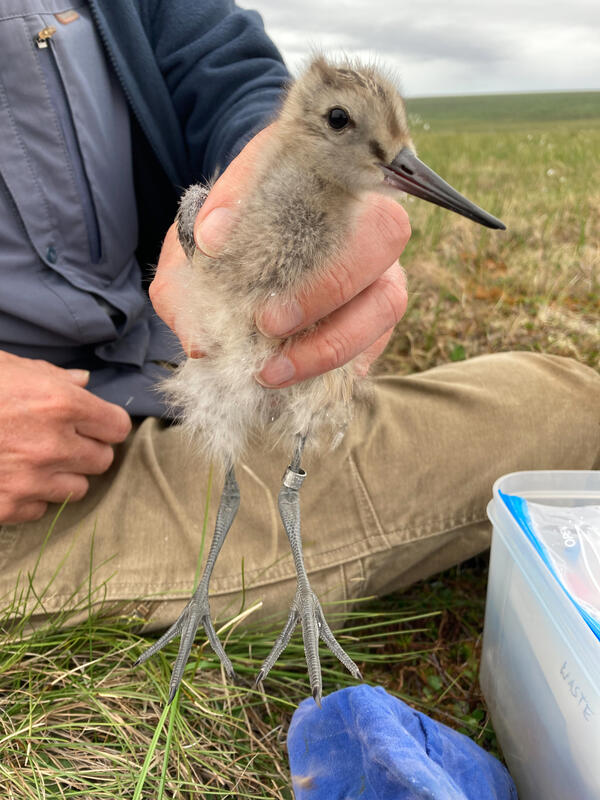 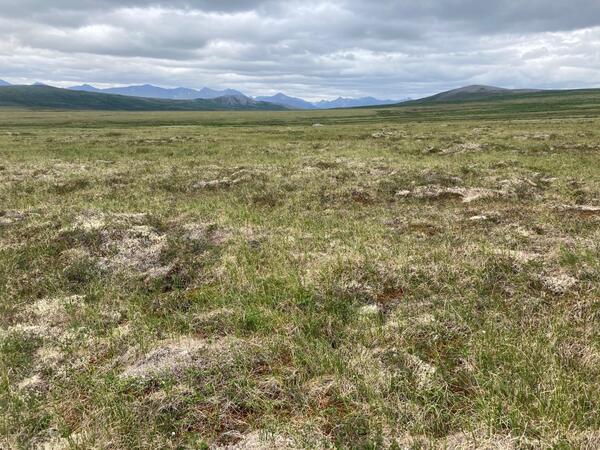 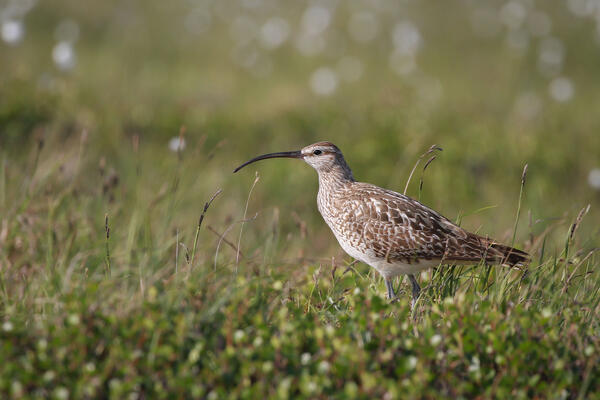 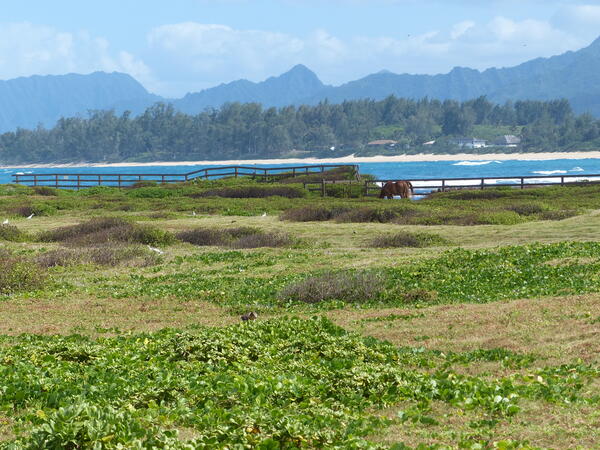 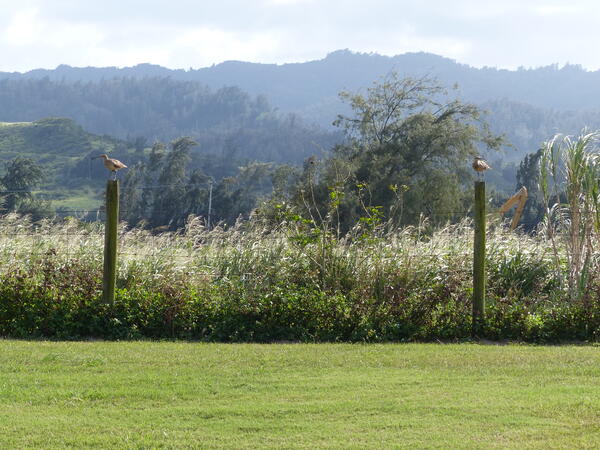 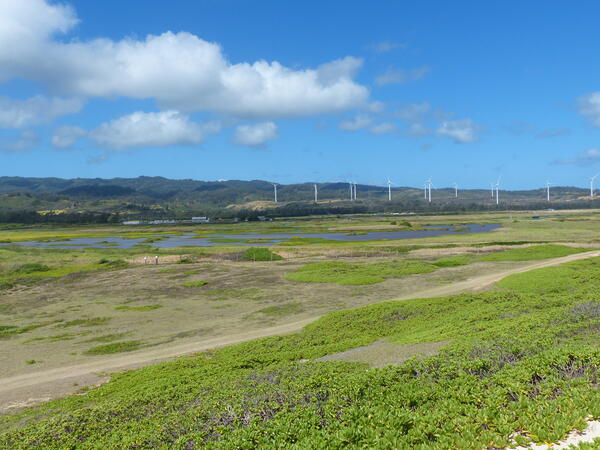 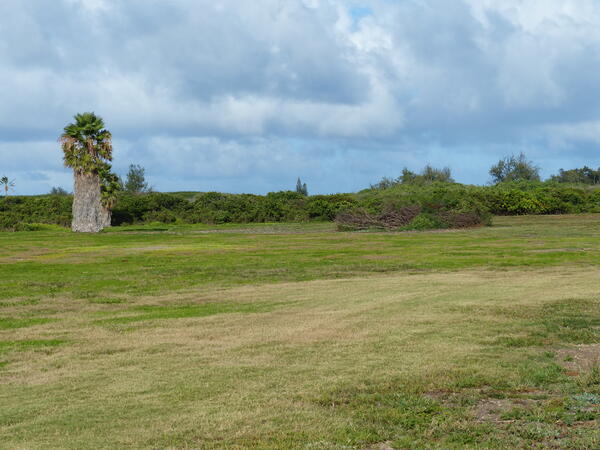 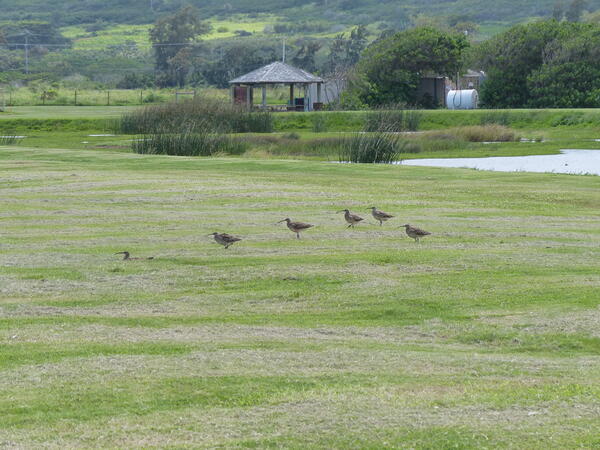 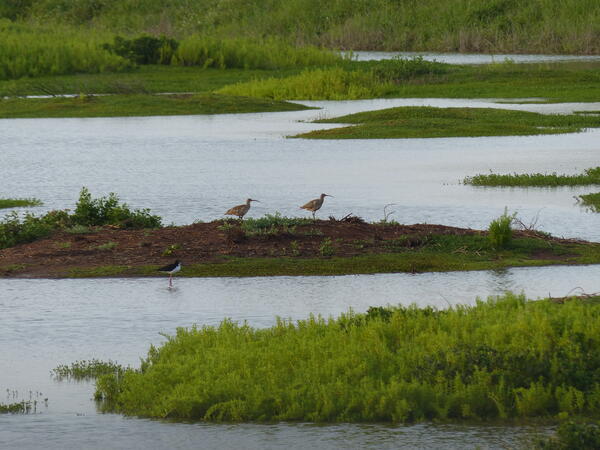 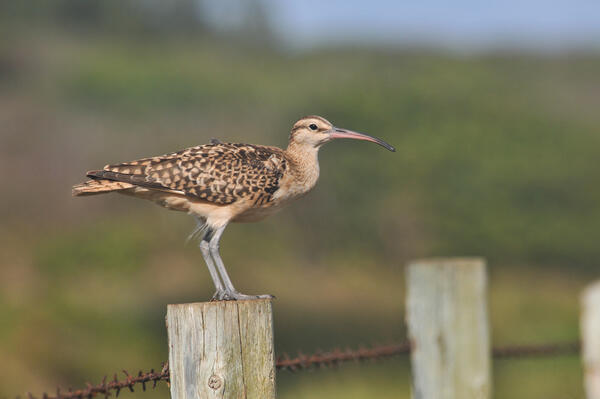 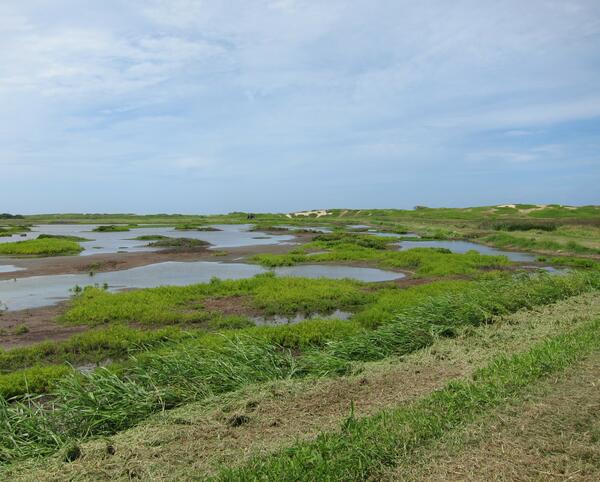 In seasonal environments subject to climate change, organisms typically show phenological changes. As these changes are usually stronger in organisms at lower trophic levels than those at higher trophic levels, mismatches between consumers and their prey may occur during the consumers’ reproduction period. While in some species a trophic mismatch induces reductions in offspring growth, this is not
By
Ecosystems, Alaska Science Center
December 1, 2021

In a 1998 paper entitled “Guts don’t fly: small digestive organs in obese bar-tailed godwits,” Piersma and Gill (1998) showed that the digestive organs were tiny and the fat loads huge in individuals suspected of embarking on a non-stop flight from Alaska to New Zealand. It was suggested that prior to migratory departure, these godwits would shrink the digestive organs used during fuel deposition
By
Ecosystems, Alaska Science Center
June 1, 2021

Diverse patterns of migratory timing, site use, and site fidelity by Alaska-breeding Whimbrels

The ecological reasons for variation in avian migration, with some populations migrating across thousands of kilometres between breeding and non-breeding areas with one or few refuelling stops, in contrast to others that stop more often, remain to be pinned down. Red Knots Calidris canutus are a textbook example of a shorebird species that makes long migrations with only a few stops. Recognizing t
By
Ecosystems, Alaska Science Center
November 9, 2020

Shorebirds—which include sandpipers, plovers, and oystercatchers—are perhaps best known by their presence on sandy beaches, running along the water’s edge while they probe for food. But they are probably less recognized for their impressive long-distance migrations. Millions of individuals travel from across the globe to breed throughout Alaska each spring, making these birds a familiar and import
By
Ecosystems, Alaska Science Center
June 13, 2020

Conservation status and management priorities are often informed by population trends. Trend estimates can be derived from population surveys or models, but both methods are associated with sources of uncertainty. Many Arctic-breeding shorebirds are thought to be declining based on migration and/or overwintering population surveys, but data are lacking to estimate the trends of some shorebird spec
By
Ecosystems, Alaska Science Center, Upper Midwest Environmental Sciences Center
May 15, 2020

A red knot as a black swan: How a single bird shows navigational abilities during repeat crossings of the Greenland Icecap

Despite the wealth of studies on seasonal movements of birds between southern nonbreeding locations and High Arctic breeding locations, the key mechanisms of navigation during these migrations remain elusive. A flight along the shortest possible route between pairs of points on a sphere (‘orthodrome’) requires a bird to be able to assess its current location in relation to its migration goal and t
By
Ecosystems, Alaska Science Center
April 1, 2020

We used Pinpoint GPS-Argos tags to track migration of Pacific Golden-Plovers Pluvialis fulva in 2017 and 2018 from Moorea Island, at the extreme southeastern edge of the species’ winter range. Of 20 tagged birds, 13 uploaded locations during all or part of their northward migration. The birds departed in mid-April traveling a long (8,250–10,200 km) northwestward track. Ten individuals signaled fro
By
Ecosystems, Alaska Science Center
September 18, 2019

Factors promoting the recolonization of Oahu, Hawaii, by Bristle-thighed Curlews

Suitable habitat for Arctic-breeding migratory shorebirds is decreasing at their traditional wintering islands and atolls in the Central Pacific Flyway (i.e., Oceania) due to habitat degradation, reclamation, and sea-level rise. To maintain the size and resiliency of their populations, migratory shorebirds will need to expand their winter ranges by either colonizing new sites or recolonizing old
By
Ecosystems, Alaska Science Center
July 12, 2019

Satellite‐based technologies that track individual animal movements enable the mapping of their spatial and temporal patterns of occurrence. This is particularly useful in poorly studied or remote regions where there is a need for the rapid gathering of relevant ecological knowledge to inform management actions. One such region is East Asia, where many intertidal habitats are being degraded at unp
By
Ecosystems, Alaska Science Center

A four-month-old bar-tailed godwit known as B6 set a new world record by completing a non-stop 11-day migration of 8,425 miles from Alaska to Tasmania...

Story Map of the Incredible Migration of Whimbrels

This story map describes the work of researchers from different organizations that document the migration of Whimbrels breeding in North America...

A recent U.S. Geological Survey-led study of the bar-tailed godwit, a shorebird known famously as the ultimate marathon champion of bird flight...