Gravity is a measurement of mass: the greater an object's mass, the stronger its gravitational pull. By measuring changes in gravity over time, inferences can be made about changes in mass. In hydrology, this can be used to study water in the subsurface. If the amount of groundwater in a particular area increases over time, through processes such as infiltration of rainfall or aquifer recharge, gravity will also increase. Likewise, losses of groundwater storage, resulting from processes such as pumping, discharge to streams, and evaporation, will cause gravity to decrease.

The U.S. Geological Survey's Arizona Water Science Center (AzWSC) is a worldwide leader in the development and use of gravity methods for hydrology. The AzWSC has developed gravity methods for monitoring recharge near an ephemeral-stream channel, monitoring aquifer-storage change in a compressible aquifer, estimating recharge at an artificial-recharge facility, and estimating specific yield through the correlation of gravity and water-level change in wells.

Gravity monitoring has many applications including geodetic purposes as well as monitoring geothermal energy, petroleum, energy storage, magma, volcanoes, and subsurface water. Hydrologic gravity monitoring can be used in multiple ways to observe variations in water storage in soils, unsaturated zones (the zone above saturated material), and aquifer. Water mass change is the most prevalent and primary cause of gravity variation on the surface of the Earth over periods of decades or less. The basic observation of gravity change (corrected for atmospheric, earth-tide, and elevation variations) among repeated observations is caused by variation in subsurface water mass, unless other mass changes occurred.

There are three primary applications of hydrologic gravity measurement:

♦ Monitoring at a network of stations—Gravity change among a network of stations can be integrated to calculate total storage change in the network region as shown in figure 4. This estimate of storage change can then be used to improve groundwater budgets by supplying an estimate of a water budget component that is normally unknown or difficult to obtain through other methods. In fact, gravity monitoring is the only method of estimating large-scale groundwater-storage change.

Instruments Owned by the AzWSC

(Use of trade names is for identification purposes only and does not constitute endorsement by the U.S. Geological Survey)

♦ A10 Absolute Gravity Meter—The A10 absolute gravity meter is a portable device, designed for field operation, which determines the acceleration due to gravity directly by measuring the position of a falling mass at different time intervals. It can be operated either from vehicle or battery power, in all field conditions. Each measurement is independent and the survey loops required for relative gravity meter studies are not needed.

♦ Relative Gravity Meters—These meters measure the relative difference in gravity between two stations. Field procedures and processing are more involved than the A10 absolute gravity meter, but they provide similar accuracy at reduced cost. They are most suitable for stations located relatively close together (up to a few miles) with good access on paved roads.

Other Instruments Operated by the AzWSC

(Use of trade names is for identification purposes only and does not constitute endorsement by the U.S. Geological Survey)

♦ Superconducting Gravity Meters—These meters provide the most precise gravity measurements possible. The AzWSC has previously deployed one at its Tucson office to measure gravity change associated with pumping from a nearby well from January 2010 to March 2011. Two of the latest generation superconducting gravimeters, the iGrav™, are deployed at an artificial recharge facility from February 2012 to October 2012.

♦ gPhone Relative Gravity Meters—These meters are a temperature stabilized version of the LaCoste and Romberg relative meters that feature nearly linear drift. Over periods of months or longer, this drift can be removed to provide accuracy approaching 1 microGal. Three of these meters are to be deployed at an artificial recharge facility from March 2012 to October 2012.

♦ FG5 Absolute Gravity Meter—This instrument is the most precise absolute gravity meter available. Unlike the A10, it is primarily intended to operate indoors or in climate controlled conditions. The AzWSC had partnered with the National Geodetic Survey to collect FG5 data at a number of sites in Arizona. 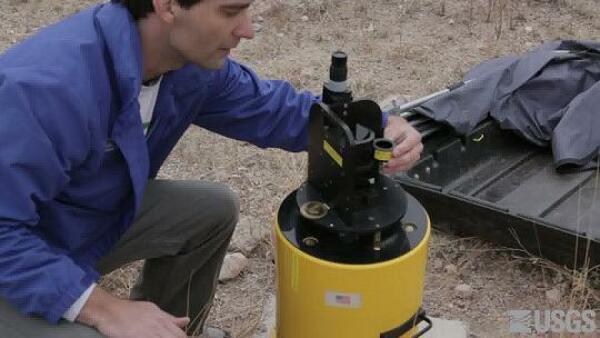 Below are publications associated with Hydrologic Gravity Monitoring.

The first North American Comparison of absolute gravimeters (NACAG-2010) was hosted by the National Oceanic and Atmospheric Administration at its newly renovated Table Mountain Geophysical Observatory (TMGO) north of Boulder, Colorado, in October 2010. NACAG-2010 and the renovation of TMGO are part of NGS’s GRAV-D project (Gravity for the Redefinition of the American Vertical Datum). Nine absolute
By
Water Resources, Arizona Water Science Center
December 15, 2011

Gravity and land subsidence were measured annually at wells and benchmarks within two networks in Tucson Basin and Avra Valley from 1998 to 2002. Both networks are within the Tucson Active Management Area. Annual estimates of ground-water storage change, ground-water budgets, and land subsidence were made based on the data. Additionally, estimates of specific yield were made at wells within the mo
By
Water Resources, Arizona Water Science Center
May 19, 2008

A large fraction of ground water stored in the alluvial aquifers in the Southwest is recharged by water that percolates through ephemeral stream-channel deposits. The amount of water currently recharging many of these aquifers is insufficient to meet current and future demands. Improving the understanding of streambed infiltration and the subsequent redistribution of water within the unsaturated z
By
Water Resources, Arizona Water Science Center
December 31, 2007

Coincident monitoring of gravity and water levels at 39 wells in southern Arizona indicate that water-level change might not be a reliable indicator of aquifer-storage change for alluvial aquifer systems. One reason is that water levels in wells that are screened across single or multiple aquifers might not represent the hydraulic head and storage change in a local unconfined aquifer. Gravity esti
By
Water Resources, Arizona Water Science Center
December 31, 2005

Set standard deviation, repeatability and offset of absolute gravimeter A10-008

The set standard deviation, repeatability and offset of absolute gravimeter A10-008 were assessed at the Walferdange Underground Laboratory for Geodynamics (WULG) in Luxembourg. Analysis of the data indicates that the instrument performed within the specifications of the manufacturer. For A10-008, the average set standard deviation was (1.6 0.6) ??Gal (1Gal ??? 1 cm s -2), the average repeatabilit
November 30, 2001

The Tucson Active Management Area (TAMA) comprises two basins--Tucson Basin and Avra Valley. The TAMA has been directed by Arizona ground-water law to attain an annual balance between groundwater withdrawals and recharge by the year 2025. This balance is defined by the statute as "safe yield." Current ground-water withdrawals exceed recharge, resulting in conditions of ground-water overdraft, whic
By
Water Resources, Arizona Water Science Center
November 30, 2001

The availability of ground water is of extreme importance in areas, such as southern Arizona, where it is the main supply for agricultural, industrial, or domestic purposes. Where ground-water use exceeds recharge, monitoring is critical for managing water supplies. Typically, monitoring has been done by measuring water levels in wells; however, this technique only partially describes ground-water
By
Arizona Water Science Center
May 31, 2001

The hydrogeology of Picacho Basin was studied to define the stratigraphy, basin structure, physical and hydraulic properties of the basin sediments, and predevelopment and postdevelopment conditions of ground-water flow as of 1985. The study area includes about 900 square miles and contains a sedimentfilled asymmetric graben. The greatest sediment thickness occurs along the east margin of the grab
By
Arizona Water Science Center
October 31, 2000

Aquifer storage was monitored using gravity methods in the Lower Canada del Oro subbasin from 1996 through 1998 to determine areas of infiltration and amounts of recharge along the Canada del Oro Wash after major surface flow and to estimate aquifer-storage change and specific-yield values for the regional aquifer.  Both purposes were addressed by periodic monitoring of changes in aquifer storage
By
Arizona Water Science Center
March 31, 1998

The temporal-gravity method was used to estimate ground-water storage change and specific -yield values at wells near Rillito Creek, Tucson, Arizona, between early December 1992 and early January 1994. The method applies Newton's Law of Gravitation to measure changes in the local gravitational field of the Earth that are caused by changes in the mass and volume of ground water. Gravity at 50 stati
By
Arizona Water Science Center