Mercury (Hg), a legacy pollutant from mining of mercury deposits in the Coast Ranges as well as gold deposits in the Sierra Nevada, has contaminated surface waters throughout northern California. Methylmercury (MeHg) is an organic form of Hg that bioaccumulates in food webs to elevated concentrations that threaten ecological health and human health through consumption of sport fish.

The Cache Creek Settling Basin (CCSB) is an area managed by the California Department of Water Resources where Hg-contaminated sediment from the is trapped. There is considerable interest in the CCSB from the Regional Water Quality Control Board – Central Valley Region, as a place where potentially significant load reductions of Hg and MeHg may be achieved in the context of pending regulation under the Total Maximum Daily Loads (TMDL) process. There is also concern that wetlands and agricultural fields within the CCSB are areas where Hg is methylated. There is currently a lack of reliable data on loads of Hg and MeHg in and out of the CCSB, and no data on the distribution of Hg and MeHg in sediments within the CCSB.

The main purpose of this study is to quantify Hg and MeHg loads into and out of the CCSB during various flow regimes. A secondary goal is to assess the temporal and spatial variability of Hg-sediment relationships and to begin to develop a conceptual model of Hg methylation within the CCSB that can be used as a basis for the development of potential mitigation strategies that will result in reduced loads of Hg and MeHg out of the CCSB to the Yolo Bypass.

The study approach includes: a) collection of surface water flowing into and out of the CCSB and analysis for Hg, MeHg, suspended sediment, and other constituents during baseline conditions (Task 1) and particulate Hg and MeHg and suspended sediment during storm events (Task 2) over two water years (November 2009 through September 2011); b) collection and analysis of surface water (Task 3) and shallow sediment (Task 4) along transects within the CCSB to assess spatial and temporal gradients of Hg species and ancillary constituents that may affect formation of Hg(II)R and MeHg; c) collection and analysis of sediment in vertical profiles (drill cores) at selected locations within the CCSB to assess long-term temporal and spatial variations in trapped Hg (Task 5); and d) analysis of THg and MeHg loads for inflows and outflows (Task 6).

The CCSB acts as a sediment trap by capturing the flashy storm flows from Cache Creek and allowing the sediment to settle before exiting into the Yolo Bypass, a flood conveyance that protects the cities of Sacramento and West Sacramento and portions of Sacramento and Yolo County from high flows in the Sacramento River. Previous work by the Regional Water Quality Control Board – Central Valley Region indicates that CCSB traps about half of the input sediment and associated particulate mercury (Wood et al., 2010a). However, because of the flashy nature of Cache Creek and poor historical hydrologic data, available data on loads of sediment and mercury into and out of the CCSB have a large uncertainty. In recent years, DWR has become interested in increasing the storage capacity and the sediment and mercury trapping efficiency of the CCSB. Starting in 2008, DWR has provided funds to the USGS CAWSC Sacramento Field Office (SFO) to improve the flow and sediment record for the CCSB. Stream gages at the outflow and overflow weir of the CCSB were upgraded by USGS. Discharge and suspended sediment data have been collected by the USGS SFO since January 2009. In addition, DWR has contracted with Prof. Lev Kavvas at the Department of Civil Engineering at the Univ. of California, Davis to develop a model of sediment transport, deposition, and trapping efficiency within the CCSB.

In 2009, DWR approached the USGS CAWSC Sacramento Projects Office (SPO) with interest in expanding the monitoring in the CCSB to include mercury (Hg) and methylmercury (MeHg) of the inflow and outflows. There is considerable interest in the CCSB from the Regional Water Quality Control Board – Central Valley Region, as a place where potentially significant load reductions of Hg and MeHg may be achieved in the context of pending regulation under the Total Maximum Daily Loads (TMDL) process. Although the CCSB traps much of the total Hg (THg) from Cache Creek, it is unknown how effective the CCSB is in trapping methylmercury (MeHg), the predominant toxic and bioavailable form of Hg. There is also concern that seasonal wetlands and agricultural fields within the CCSB are areas where Hg is methylated such that there may actually be a net increase of MeHg loads as Cache Creek passes through the CCSB rather than a net removal from particle settling, as is the case with THg. DWR is also concerned that future excavation in the CCSB related to the TMDL might expose sediment with higher THg, possibly leading to higher MeHg.

The study approach employs both standard monitoring activities and supporting research efforts. The monitoring activities are designed to address the cooperator requests whereas the research efforts are designed to address data gaps that may affect DWR’s ability to manage the CCSB to reduce loads of THg and MeHg. THg can be considered conservative with respect to particles – this allows the simple extension of the sediment model to include THg loadings – though THg concentration differs by particle source and grain size, which likely varies with storm intensity and season. In contrast, MeHg is not conservative and is likely is both produced within the CCSB and lost by settling and microbial and photolytic demethylation reactions. To address the complex behavior of MeHg, we are making some additional measurements to investigate spatial and temporal variations in MeHg and other constituents within the CCSB to ascertain possible factors controlling the magnitude and direction of net MeHg loads. The study approach is organized in six tasks: Task 1. Non-storm (baseline, wet season) sampling of inflow and outflows; Task 2. Storm sampling of inflows and outflows; Task 3a, Water gradient sampling, emphasizing spatial distribution of MeHg and ancillary constituents in riparian wetland (SW) vs. agricultural fields (NE), and upstream (NW) vs. downstream (SE); Task 3b, Biological sampling, emphasizing spatial distribution of MeHg in songbird eggs and blood and in caged mosquitofish; Task 4, Sediment gradient sampling (similar spatial emphasis as Task 3a, with seasonal component); Task 5, Deep cores; Task 6, Load calculations.

The products of the study will be a series of journal articles describing the methods used, data collected, and loads calculated with regard to the inflows and outflows of the CCSB and the spatial and temporal variability of THg and MeHg within the CCSB. 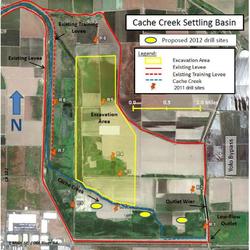 The California Department of Water Resources (DWR) is responsible for the operation and maintenance of the Cache Creek Settling Basin (CCSB) in Yolo County.
By
California Water Science Center
link
December 19, 2018

The California Department of Water Resources (DWR) is responsible for the operation and maintenance of the Cache Creek Settling Basin (CCSB) in Yolo County.
Learn More

Geochemistry of shallow sediment including mercury, methylmercury and other constituents in the Cache Creek Settling Basin, Yolo County, California, 2010-16

The Cache Creek Settling Basin (CCSB) is a 13.3 km2 leveed basin located at the terminal drainage of the Cache Creek watershed, immediately NE of the town of Woodland (Yolo County), California and approximately 18 km NW of Sacramento, California. The basin was constructed by the U.S. Army Corps of Engineers (completed in 1937 and modified in 1993) for the purpose of trapping suspended sediment tra
By
Water Resources

Geochemistry of mercury and other constituents in subsurface sediment—Analyses from 2011 and 2012 coring campaigns, Cache Creek Settling Basin, Yolo County, California

Cache Creek Settling Basin was constructed in 1937 to trap sediment from Cache Creek before delivery to the Yolo Bypass, a flood conveyance for the Sacramento River system that is tributary to the Sacramento–San Joaquin Delta. Sediment management options being considered by stakeholders in the Cache Creek Settling Basin include sediment excavation; however, that could expose sediments containing e
By
Water Resources, California Water Science Center