The SPOT Historical archive holdings were received from the SPOT IMAGE Corporation in 1999. The French space agency, Centre National d'Etudes Spatiales (CNES), owns and operates the SPOT satellite system and worldwide commercial operations are anchored  by private companies (i.e., SPOT IMAGE Corp. of the United States and other distributors around the world).

The SPOT Historical archive holdings maintained and preserved by the USGS/Earth Resources Observation and Science (EROS) Center were received from the SPOT IMAGE Corporation in 1999. The French space agency, Centre National d'Etudes Spatiales (CNES), owns and operates the SPOT satellite system and worldwide commercial operations are anchored  by private companies (i.e., SPOT IMAGE Corp. of the United States and other distributors around the world).

The SPOT satellites carry two High Resolution Visible (HRV) sensors. The HRVs consist of multi­ linear array detectors that operate in a cross-track direction. Operating independently of each other, the two HRVs acquire imagery in either multi-spectral and/or panchromatic modes at any viewing angle within plus or minus 27 degrees. This off-nadir viewing also enables the acquisition of stereoscopic imagery.

The acquisition years range from June 1986 to December 1998.

SPOT satellites maintain a near-polar, near-circular, Sun-synchronous orbit with a mean altitude of 832 km at 45 degrees north latitude at an inclination of 98.7 degrees, and a mean revolution period equaling 101.4 minutes. The SPOT satellites orbit the same nadir ground track every 26 days with a nominal cycle of 369 revolutions. Crossing  the equator from north to south at 10:30 a.m.mean local solar time, the satellites' reference tracks are 108.6 km apart. The reference tracks draw closer at higher latitudes. Each HRV sensor views a 60-km area, and together they view a 117-km  area with 3-km overlap.

Each SPOT satellite data-collection pass lasts approximately 10 minutes with a constant viewing configuration. Each pass yields two data segments with each segment containing approximately 75 scenes. This typically represents use of either one HRV set to dual mode or use of both HRVs in single mode. The size of individual scenes varies (i.e., a vertically viewed scene has a 60- by 60-km scene size while an obliquely viewed scene at maximum has a 60- by 81-km scene size). Grid Reference System (GRS) identification.

All SPOT Historical scenes were initially processed to Level 1 GST at EROS using the National Land Archive Production System (NLAPS) and are made accessible to authorized users through EarthExplorer. The SPOT L1T Product Generation is a two step process which utilizes in-house software – Land Analysis System (LAS) to perform an automated image-to-image registration.

Coverage Maps indicating the availability of SPOT Historical products are available for download.

USGS/EROS provides data to authorized users that comply with the USGS/SPOT agreement. These data are available at no cost to the user as direct data downloads. No hard media options exist for this data collection. All SPOT historical data (1986 to 1998) are available through EarthExplorer.

Grid Reference System (GRS)
The SPOT Grid Reference System (GRS) is used to identify the geographic location of SPOT images. The grid is made up of nodes located at the intersection of columns (K) and rows (J). When data strips are split into scenes, the SPOT GRS links each scene with two K,J designators representing a GRS node. Once the K,J designators have been identified for a new scene, the designators are added to that scene's characteristics file.

The GRS indicates the nominal location of scenes that can be acquired within SPOT's twin­ vertical viewing configuration. In the case of oblique viewing, the scene centers do not normally coincide with the GRS nodes as defined by the surveying conditions of twin-vertical viewing. Therefore, any SPOT scene acquired in the oblique viewing mode is identified by the K,J designators of the node closest to the scene center.

The GRS divides the Earth into five zones forming a symmetrical pattern on either side of the Equator. This division is dictated by the satellite's orbital characteristics and, more specifically, by the convergence of the ground tracks at high latitudes.

In the north, intermediate, and south zones, the K columns are parallel to satellite ground tracks while the J rows are parallel to latitude lines. The pattern of nodes within the three zones is defined in terms of satellite viewing conditions corresponding to the twin-vertical viewing configuration. This pattern indicates the nominal location of scene centers yielded by the viewing configuration. With oblique viewing, scene centers are always located on the J row, but scene centers may not coincide in longitude with GRS nodes.

The distance between these two columns (i.e., between K=2N-1 and K=2N) is constant at about 58 km and is a direct result of the twin-vertical viewing configuration.

Since the GRS nodes are located on either side of the reference tracks, the scene centers obtained in vertical viewing do not coincide with the GRS nodes.

The J rows correspond to latitude lines (i.e., all GRS nodes at the same latitude share the same J designator). The interval between the rows has been calculated to ensure that minimum endlap occurs between two successive scenes. The scenes of a given data strip are segmented in such a way that the scene centers are located on two adjacent rows (J and J+1).

In the two polar zones, the GRS node pattern is independent of satellite orbital and viewing characteristics. The pattern is obtained through hexagonal dissection using quasi-equilateral triangles, where the triangle measures approximately 26 km to a side.

EarthExplorer can be used to search, preview, and download SPOT Historical data. The collection is located on the Data Sets menu under Commercial Satellites>SPOT>SPOT-Historical.  Qualified users must be logged in to EarthExplorer to gain access to this dataset. 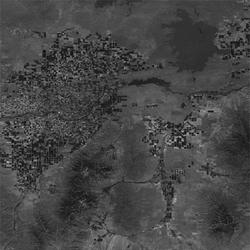 SPOT Controlled Image Base is an orthorectified product derived from panchromatic images with a 10-meter ground sample distance. Coverage is limited to portions of the United States, Europe, Middle East, Southeast Asia, North and South Korea, Central America, western Russia, and other smaller areas around the world. (1986-1993)
Learn More
link 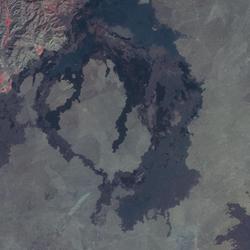 Multispectral data over the United States acquired by SPOT 4 and 5 satellites. This dataset of licensed commercial imagery is available to U.S. civil Government agencies. (2010 - 2013)
Learn More