When two interferometric radar data sets are combined the first product made is called an interferogram (also called a fringe map). A fringe map looks similar to those bands of color you see in a film of oil.

SRTM was a fixed-baseline interferometry mission. This means two radar data sets were collected at the same time and the antennas that collected the data were separated by a fixed distance. In the SRTM mission, the main antenna onboard the space shuttle collected one data set and the other data set was collected by the outboard antenna located at the end of the 60 meter (200 foot) mast.

When you turn on a light bulb to illuminate a room, light rays are emitted from the bulb and strike all the objects in the room. The waves of light that are reflected from the objects enter your eye, allowing you to see

For SRTM, the main antenna located in the payload bay of the space shuttle illuminated a portion of the surface of the Earth. But instead of using light rays, a beam of radar waves was transmitted. When the radar waves hit the surface of the Earth, rays were scattered in various directions. These scattered waves were collected by the two SRTM antennas.

Using the information about the distance between the two antennas and the differences in the reflected radar wave signals, accurate elevation of the Earth's surface can be calculated.

EarthExplorer can be used to search, preview, and download Shuttle Radar Topography Mission (SRTM) 1 Arc-Second Global data. The collections are located under the Digital Elevation category. 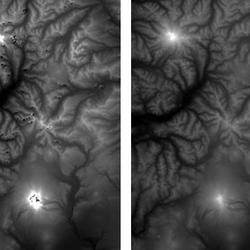