Spaceborne Imaging Radar-C (SIR-C) is an imaging radar system launched aboard the NASA Space Shuttle twice in 1994, SIR-C's unique contributions to Earth observation and monitoring are its capability to measure, from space, the radar signature of the surface at two different wavelengths and make measurements for different polarizations at those wavelengths.

The National Center for Earth Resources Observation & Science (EROS) is distributing SIR-C processed Survey and Precision data. SIR-C image data have helped scientists understand the physics behind some of the phenomena seen in radar images at just one wavelength/polarization, such as those produced by SeaSAT. Investigators on the SIR-C/X-SAR Science team have used the radar image data to make measurements of: Vegetation type, extent and deforestation; Soil moisture content; Ocean dynamics, wave and surface wind speeds and directions; Volcanism and tectonic activity; Soil erosion and desertification.

The SIR-C radar has various modes of operation which are different combinations of frequency and polarization (see Mode Table). Modes 1 through 16 were the primary modes of operation. Not every polarization and every frequency were acquired on each data_take. Different modes were used for each data_take depending on the primary science goal of the data_take. For example, geology data_takes were often taken in Mode 11 which provides dual frequency and dual polarization data and a swath width of approximately 30-50 km thereby providing good data coverage. Ecology data_takes were often taken in mode 16 which is dual frequency and quad polarization; due to the greater amount of data collected in mode 16, the swath width is narrower and is typically 10-25 km wide. Many sites were imaged in more than one mode on different data_takes (passes). The mode information can be found on line #6 of the DTHDR.TXT text file posted with the survey data for each data_take.

Coverage Maps indicating the availability of SIR-C Survey products are available for download.

As of June 2005, unprocessed precision and interferometry data is no longer available from the EROS archive as the SIR-C processor is inoperable and not repairable. Repair parts and maintenance support of critical system components are no longer available to continue SIR-C system operations.

Precision and interferometry data that has been previously processed can be downloaded through EarthExplorer. 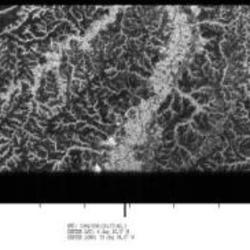