The Greater Everglades Ecosystem, which includes Everglades National Park and Biscayne National Park, experienced significant alterations in the 20th century with the construction of canals to divert water, water management practices, growth of agriculture, and the rapidly expanding urban population of Miami and south Florida.  In the 1990s a federal, state, and local effort to restore the Greater Everglades Ecosystem was initiated; however, a significant problem for resource managers was lack of information on what the system looked like prior to the 20th century.  Our project addresses the questions of freshwater availability and salinity in the natural ecosystem prior to canal construction.  Results from our research are used by resource managers to set goals and targets for restoration of the Everglades.

The Greater Everglades Ecosystem, located in southern Florida, is a unique environment that includes freshwater wetlands, cypress domes, one of the world’s most extensive mangrove coastlines, estuaries, and the only reef tract in the continental United States. Everglades National Park is a significant part of this ecosystem and has been designated a World Heritage Site, an International Biosphere Reserve, and a Wetland of International Importance. The seasonal rainfall and flat landscape make the area vulnerable to flooding, so beginning in the late 1800s, as the population of south Florida grew, there was a demand for protection from flooding and for additional water and land for agriculture and the increasing population. These demands led to construction of extensive canal systems to divert water and roads and railways to make travel through the relatively undeveloped region easier. These built features, however, divided up the landscape and significantly changed the natural flow of freshwater through the wetlands to the estuaries and coastal ecosystems.

The Comprehensive Everglades Restoration Plan (CERP) was developed in the 1990s and was authorized by Congress as part of the Water Resources Development Act of 2000 (U.S. Public Law 106-451). The CERP outlines the need for science to guide restoration of the Everglades and the driving principle of the CERP is “to get the water right,” which means to restore as much of the natural hydrology and ecological functioning as possible. To accomplish these goals, resource managers need to understand how the natural ecosystem functioned prior to significant human alteration. The problem is that few scientific or anecdotal records exist for the early 20th century. Moreover, ecosystems change over hundreds or even thousands of years so to be able to restore an ecosystem and to develop management plans that include adaptation to future change, resource managers need to understand how the ecosystem responds to long-term forcing factors (for example, storms, climate, sea level).

Our research is designed to answer these questions for the resource management agencies (National Park Service, U.S. Fish & Wildlife Service, Army Corps of Engineers, and the South Florida Water Management District, and others). The clues to what the past environment was like are contained in the sediments formed and deposited in the region, so we collect sediment cores from throughout south Florida. The sediments, plant and animal remains, pollen, isotopes, and geochemistry of the cores are analyzed and the ages of the sediments are determined through geochronology (radio-isotopes) and pollen biostratigraphy. The basis of our work is the principal that “the present is the key to the past.” We study the present-day environment of south Florida and learn how the plants and animals live (for example, what is the salinity, pH, or depth of the water) to interpret the information in the cores. As a result of our work, managers have a better understanding of how much freshwater flowed through the system before the canals were built, how the freshwater influenced the salinity of the estuaries in the natural system, and how the plants and animals have responded to these changes. They use this information on the past to set targets and performance measures for hydrologic restoration of the Everglades. 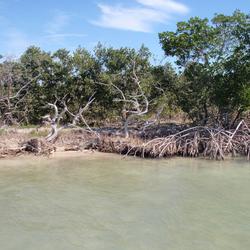 Sea Level Rise and Climate: Impacts on the Greater Everglades Ecosystem and Restoration

The Greater Everglades Ecosystem covers much of south Florida, and the highest areas are only a few meters above sea level. Predictions of sea level rise and changes in storm intensity for the 21st century are particularly concerning to the urban population of Miami and the east coast, but also represent a challenge to Everglades National Park and Biscayne National Park resource managers. The...
By
Florence Bascom Geoscience Center, St. Petersburg Coastal and Marine Science Center, Wetland and Aquatic Research Center
link
October 11, 2018

Sea Level Rise and Climate: Impacts on the Greater Everglades Ecosystem and Restoration

The Greater Everglades Ecosystem covers much of south Florida, and the highest areas are only a few meters above sea level. Predictions of sea level rise and changes in storm intensity for the 21st century are particularly concerning to the urban population of Miami and the east coast, but also represent a challenge to Everglades National Park and Biscayne National Park resource managers. The...
Learn More

Below are databases associated with this project.

Determining hydrologic conditions prior to instrumental records is a challenge for restoration of freshwater ecosystems worldwide. Paleoecologic data provide this information on past conditions and when these data are used to adjust hydrologic models, allow conditions to be hindcast that may not be directly estimated from the paleo-data alone. In this context, the paleo-data provide real-world es
By
Florence Bascom Geoscience Center
October 1, 2017

Application of paleoecology to ecosystem restoration: A case study from south Florida’s estuaries

Paleoecological analyses of biotic assemblages from cores collected throughout south Florida’s estuaries indicate gradually increasing salinities over approximately the last 2000 years, consistent with rising sea level. Around the beginning of the twentieth century these gradual patterns of change began to shift, corresponding to the beginning of human alteration of the environment via canal const
By
Florence Bascom Geoscience Center
June 15, 2017

The role of paleoecology in restoration and resource management—The past as a guide to future decision-making: Review and example from the Greater Everglades Ecosystem, U.S.A

Resource managers around the world are challenged to develop feasible plans for sustainable conservation and/or restoration of the lands, waters, and wildlife they administer—a challenge made greater by anticipated climate change and associated effects over the next century. Increasingly, paleoecologic and geologic archives are being used to extend the period of record of observed data and provide
By
Florence Bascom Geoscience Center
June 14, 2017

Molluscs possess a number of attributes that make them an excellent source of past environmental conditions in estuaries: they are common in estuarine environments; they typically have hard shells and are usually well preserved in sediments; they are relatively easy to detect in the environment; they have limited mobility as adults; they grow by incremental addition of layers to their shells; and
By
Florence Bascom Geoscience Center
March 25, 2015

Biological indicators of changes in water quality and habitats of the coastal and estuarine areas of the Greater Everglades Ecosystem; Chapter 11

This chapter summarizes the application of various biological indicators to studying the anthropogenic and natural changes in water quality and habitats that have occurred in the coastal and estuarine areas of the Greater Everglades ecosystem.
By
Florence Bascom Geoscience Center
November 1, 2014

Estimates of natural salinity and hydrology in a subtropical estuarine ecosystem: implications for Greater Everglades restoration

Disruption of the natural patterns of freshwater flow into estuarine ecosystems occurred in many locations around the world beginning in the twentieth century. To effectively restore these systems, establishing a pre-alteration perspective allows managers to develop science-based restoration targets for salinity and hydrology. This paper describes a process to develop targets based on natural hydr
By
Florence Bascom Geoscience Center
April 23, 2012

Throughout the 20th century, the Greater Everglades Ecosystem of south Florida was greatly altered by human activities. Construction of water-control structures and facilities altered the natural hydrologic patterns of the south Florida region and consequently impacted the coastal ecosystem. Restoration of the Greater Everglades Ecosystem is guided by the Comprehensive Everglades Restoration Plan
By
Florence Bascom Geoscience Center
January 1, 2012

Application of a weighted-averaging method for determining paleosalinity: a tool for restoration of south Florida's estuaries

A molluscan analogue dataset is presented in conjunction with a weighted-averaging technique as a tool for estimating past salinity patterns in south Florida’s estuaries and developing targets for restoration based on these reconstructions. The method, here referred to as cumulative weighted percent (CWP), was tested using modern surficial samples collected in Florida Bay from sites located near f
January 1, 2009