Genetic and Demographic Analyses of Species at Risk Active

Genetic and demographic analyses are key to understanding mechanisms of population and species declines and recovery potential. They are equally important to managers assessing risk of extinction relative to the provisions of the Endangered Species Act, and for establishing recovery goals and planning recovery actions. In addition to the methodologically and conceptually complex nature of these studies, substantial effort is also needed to translate results and implications for policymakers, management agencies, and stakeholders. Further, much of this research is pivotal to high-profile controversial conservation issues, and results receive scrutiny from varied parties (international, federal, state, NGO, industry), as well as considerable press coverage.

Much of the work on these species-at-risk projects are based on molecular analyses carried out in the Conservation Genetics Laboratory. This was one of the first USGS genetics labs to address endangered species issues and remains at the cutting edge of technology and policy. For example, their recent development of high-throughput sequencing protocols for the lab has revolutionized the efficiency and rigor in which new analyses can be carried out. Continuing efforts to bridge the gap between endangered species policy and genetics, via specific studies and review papers, have been unique in the USGS. Examples of species examined include Spotted Owls, California Condors, Piping Plovers, Snowy Plovers, Red-cockaded Woodpeckers, Micronesian Kingfishers, Guam Rails, Mariana Swiftlets, Mariana Moorhens, Quino Checkerspot Butterfly, Oregon Slender Salamander, and others.

In this ongoing project, FRESC scientists and collaborators have carried out analyses on many aspects of the genetic and demographic issues related to Spotted Owl conservation efforts. This work represents analyses of the largest avian genetic and demographic dataset known. Key benefits include providing an understanding of the genetic integrity of current populations and tools critical to ESA implementation for this species. One of the primary challenges dealing with the complexity of such a large dataset is that it exceeds the limits of most genetic statistical analyses programs. To date, we have used mtDNA, microsatellites, AFLPs and other markers to examine various aspects of population structure, genetic diversity, subspecies definitions, hybridization, and determination of evolutionary significant units in Spotted Owls. The latest discovery provides evidence for Pleistocene expansion of the Northern Spotted Owl as well as significant population genetic bottlenecks in every local and regional population examined. This is a significant technological advancement as well as critically important for conservation planning. We have also worked with colleagues at San Francisco State University to investigate the occurrence and impact of blood parasites in Spotted Owls. Currently, we are examining pedigree structure and how it relates to dispersal in the owls.

Starting in 2007, FRESC became involved with the California Condor Recovery effort. Susan Haig served on the six member AOU/California Audubon Society Blue Ribbon Panel that evaluated the recovery program for California Condors. As a result of this 2-year assignment, she launched a significant research effort to investigate the feasibility of reintroducing the birds back to their former range in the Pacific Northwest. Our research addresses questions essential to any potential reintroduction such as habitat availability, lead-poisoning potential, emerging mortality risks such as wind energy development, and other essential information needs. One important contribution includes publication of a new book that provides documentation of the occurrence of condors in the Pacific Northwest. Other aspects of the condor research program include analysis and modeling of condor movements and space use in California. This research is of critical interest to the USFWS and other management agencies as they consider major land and wind-energy development proposals within the condor's range. A final aspect is investigation of genetic diversity in the past and present using ancient DNA technology to reconstitute their previous population structure in the mid-1800s. These investigations are also suggesting (work in progress) that second species of condor inhabited North America at the same time as the California Condor. 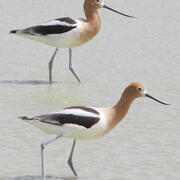 Migratory Connectivity is the geographic linking of individuals or populations between stages of an animal's life cycle. Migration is most often associated with birds, and each year upwards of 5 billion birds worldwide migrate to their breeding or wintering grounds, stopping along the way to eat, rest, or find cover.
By
Forest and Rangeland Ecosystem Science Center
link
November 27, 2017

Migratory Connectivity is the geographic linking of individuals or populations between stages of an animal's life cycle. Migration is most often associated with birds, and each year upwards of 5 billion birds worldwide migrate to their breeding or wintering grounds, stopping along the way to eat, rest, or find cover.
Learn More

Genetic differentiation among Spotted Owl (Strix occidentalis) subspecies has been established in prior studies. These investigations also provided evidence for introgression and hybridization among taxa but were limited by a lack of samples from geographic regions where subspecies came into close contact. We analyzed new sets of samples from Northern Spotted Owls (NSO: S. o. caurina) and Californ
By
Ecosystems, Forest and Rangeland Ecosystem Science Center
May 24, 2017

Understanding and estimating inbreeding is essential for managing threatened and endangered wildlife populations. However, determination of inbreeding rates in natural populations is confounded by incomplete parentage information. We present an approach for quantifying inbreeding rates for populations with incomplete parentage information. The approach exploits knowledge of pedigree configurations
By
Ecosystems, Forest and Rangeland Ecosystem Science Center
April 11, 2017

The Mariana Common Moorhen (Gallinula chloropus guami) is a highly endangered taxon, with fewer than 300 individuals estimated to occur in the wild. The subspecies is believed to have undergone population declines attributable to loss of wetland habitats on its native islands in the Mariana Islands. We analyzed mitochondrial DNA (mtDNA) sequences (control region and ND2 genes) and nuclear microsat
By
Ecosystems, Contaminant Biology, Environmental Health Program, Forest and Rangeland Ecosystem Science Center
January 30, 2015

Waterfowl (Anseriformes) and shorebirds (Charadriiformes) are the most common wild vectors of influenza A viruses. Due to their migratory behavior, some may transmit disease over long distances. Migratory connectivity studies can link breeding and nonbreeding grounds while illustrating potential interactions among populations that may spread diseases. We investigated Dunlin (Calidris alpina), a sh
By
Ecosystems, Contaminant Biology, Forest and Rangeland Ecosystem Science Center
March 10, 2014

Condors and vultures comprise the only group of terrestrial vertebrates in the world that are obligate scavengers, and these species move widely to locate ephemeral, unpredictable, and patchily-distributed food resources. In this study, we used high-resolution GPS location data to quantify monthly home range size of the critically endangered California Condor Gymnogyps californianus throughout the
By
Ecosystems, Energy & Wildlife (unpublished), Forest and Rangeland Ecosystem Science Center
March 1, 2014

Condors and vultures are distinct from most other terrestrial birds because they use extensive soaring flight for their daily movements. Therefore, assessing resource selection by these avian scavengers requires quantifying the availability of terrestrial-based habitats, as well as meteorological variables that influence atmospheric conditions necessary for soaring. In this study, we undertook the
By
Ecosystems, Forest and Rangeland Ecosystem Science Center
February 5, 2014

Captive populations can play a significant role in threatened and endangered species management. An important consideration when developing and managing captive populations, however, is the maintenance of genetic diversity to ensure that adequate variation exists to avoid the negative consequences of inbreeding. In this investigation, we compared genetic diversity patterns within captive and wild
By
Ecosystems, Forest and Rangeland Ecosystem Science Center
December 7, 2012

The Least Tern (Sternula antillarum) has undergone large population declines over the last century as a result of direct and indirect anthropogenic factors. The genetic implications of these declines are unknown. We used historical museum specimens (pre-1960) and contemporary (2001–2005) samples to examine range-wide phylogeographic patterns and investigate potential loss in the species' genetic v
By
Ecosystems, Forest and Rangeland Ecosystem Science Center
August 1, 2012

Birds employ numerous strategies to cope with seasonal fluctuations in high-quality habitat availability. Long distance migration is a common tactic; however, partial migration is especially common among broadly distributed species. Under partial migration systems, a portion of a species migrates, whereas the remainder inhabits breeding grounds year round. In this study, we identified effects of m
By
Ecosystems, Forest and Rangeland Ecosystem Science Center
May 11, 2012

The Yellow Rail (Coturnicops noveboracencis) is among the most enigmatic and least studied North American birds. Nesting exclusively in marshes and wetlands, it breeds largely east of the Rocky Mountains in the northern United States and Canada, but there is an isolated population in southern Oregon once believed extirpated. The degree of connectivity of the Oregon population with the main populat
By
Ecosystems, Forest and Rangeland Ecosystem Science Center