In 2012, this project initiated a multi-year effort to characterize domestic nonmetallic industrial mineral resources that are important for national infrastructure, agriculture, and energy development. Activities included (1) a national-scale compilation of production data, providing a snapshot of the nonmetallic industrial mineral deposits that were of significance through the 20th century and earliest part of this century, (2) an overview of frac sand, (3) an introductory study of potash, and (4) sand and gravel in southwestern Wyoming.

Industrial Minerals Through Time: Nonmetallic industrial minerals represent the largest sector of the domestic nonfuel minerals industry. In 2012, we began a multi-year effort to characterize the domestic nonmetallic industrial mineral resources that are important for national infrastructure, agriculture, and energy development. In 2007, at the 43rd Forum of the Geology of Industrial Minerals, USGS research geologists Bill Langer and Anna Wilson presented a paper explaining a novel approach for organizing and visualizing the industrial mineral commodities that were produced in 17 Western States during a century of U.S. growth. Utilizing data from the Minerals Yearbook from 1906 to 2005, they were able to find recorded production for 28 industrial minerals in the 17 States over that time period. The 2007 study will be updated and modified as necessary.

Potash: We published an updated report about the agricultural importance, geologic deposit models, geochemistry, sources (both historical and new), mining technology, and global supply chain of potash. The updated report addressed recent research that investigates potash sources from silicate minerals and rocks that may be effective when used in agricultural applications.

Sand and Gravel in Southwestern Wyoming: This research is conducted in collaboration with the Wyoming Landscape Conservation Initiative Project, a multi-agency, multi-disciplinary study. We refined a geospatial map of sand and gravel deposits relative to Quaternary and unconsolidated to loosely consolidated deposits.

Phosphate Deposit Models: We plan to publish a report on sedimentary phosphate (phosphorite) that uses current theories of phosphogenesis to support a new integrative classification system for the formation of phosphorite deposits. A new geospatial map with U.S. phosphate deposit and occurrences is also planned.

Frac Sand Resources: Frac sand is used by the petroleum industry as a proppant in hydraulic fracturing to increase the flow of oil and gas from unconventional reservoirs. The objectives were to describe the physical characteristics and geologic origin of frac sand, identify the formations known to produce or to have potential to produce frac sand, and track where frac sand is being used. 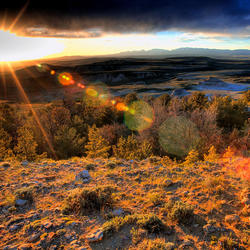 Map of sand and gravel mines, prospects, and occurrences, and the geologic units that host them in the Wyoming Landscape Conservation Initiative (WLCI) study area, southwestern Wyoming

The Wyoming Landscape Conservation Initiative (WLCI) is a long-term science based effort to assess and enhance aquatic and terrestrial habitats at a landscape scale in southwest Wyoming, while facilitating responsible development through local collaboration and partnerships. The role of the U.S. Geological Survey is to build the scientifically defensible foundation on which WLCI planners, decision
By
Geology, Geophysics, and Geochemistry Science Center
November 15, 2016

This report summarizes the primary sources of potash in the United States. Potash is an essential nutrient that, along with phosphorus and nitrogen, is used as fertilizer for growing crops. Plants require sufficient potash to activate enzymes, which in turn catalyze chemical reactions important for water uptake and photosynthesis. When potassium is available in quantities necessary for healthy pla
By
Energy and Minerals, Mineral Resources Program, Geology, Geophysics, and Geochemistry Science Center
July 31, 2015

Frac sand in the United States: a geological and industry overview

A new mineral rush is underway in the upper Midwest of the United States, especially in Wisconsin and Minnesota, for deposits of high-quality frac sand that the mining industry calls “Northern White” sand or “Ottawa” sand. Frac sand is a specialized type of sand that is added to fracking fluids that are injected into unconventional oil and gas wells during hydraulic fracturing (fracking or hydrofr
By
Mineral Resources Program, Geology, Geophysics, and Geochemistry Science Center, National Minerals Information Center

A new USGS report summarizes the primary sources of potash in the United States. Potash is an essential nutrient that, along with phosphorus and...