Willow Creek Reservoir is fed primarily from Willow Creek flowing in from the west, though other tributaries also contribute surface water to the lake.  Surface outflow from the lake is controlled by the spillway in the dam. Because the soils in the basin are highly permeable, the streams are thought to have a strong hydrologic connection to groundwater.  The eastern quarter of the reservoir is lined with compacted clay that limits the connection to the groundwater system there.

For this study, surface flow was monitored from:

Drought conditions affected the Willow Creek Basin in 2012 and persisted into 2013.  Over the course of the study, periods of no flow were observed at both tributaries.  Although there was always at least some streamflow at the Foster site, Willow Creek was observed to go dry between the Foster site and the lake for a period in 2012.  The lake levels dropped dramatically during the study, and surface outflow from the lake only occurred in the first few months of the study in 2012 and the last few months of the study in 2014. 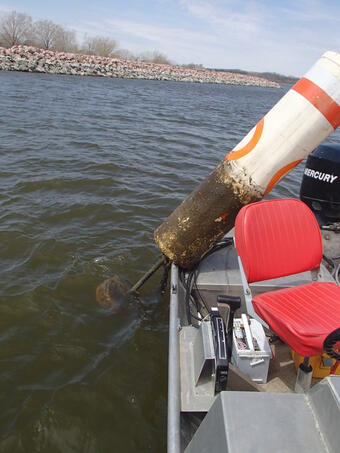 In order to manage harmful algal blooms (HABs), an understanding of the occurrence of cyanobacteria in conjunction with potential causative factors, such as  nutrient loading/cycling within a waterbody, needs to be established.  Optimally, management decisions would be aided by a predictive model capable of simulating various management scenarios and the corresponding effect on cyanobacteria in Willow Creek. In the early 1990s, Willow Creek was studied in a statewide assessment of lakes in Nebraska (see PDF below). This assessment found that the reservoir had a considerably high concentration of nutrients (such as nitrogen and phosphorus), which resulted in algal blooms. In 2006, NDEQ began monitoring microcystis levels in the reservoir.

≈ When Microcystis levels exceed 20 parts per billion, the reservoir gets put on alert. ≈

Why is algae a problem?

When a waterbody has an enriched supply of nutrients (nitrogen and phosphorus), it is classified as being eutrophic and large populations of algae can grow very quickly and form an algal bloom. As these algal cells begin to die and decompose, oxygen is consumed in the process, resulting in low levels of oxygen in the water. Sometimes the oxygen levels are depleted to such low levels that a hypoxic zone, or dead zone, can be created. In the hypoxic zone, oxygen levels have been depleted to such low levels that aerobic biota (such as most fish and aquatic insects) can no longer survive. Once a hypoxic zone has developed, it could take a waterbody years to return to its former healthy state.

What are toxic algae?

1. Characterize cyanobacteria levels in Willow Creek Reservoir: Using the collected data, a history of cyanobacterial blooms is being compiled to help understand the cyanobacteria dynamics in the area.

2. Characterize potential causes of cyanobacteria blooms within the Willow Creek basin: Cyanobacterial blooms in Willow Creek Reservoir are likely impacted by the incoming tributary and groundwater flows entering the reservoir. Scientists suspect that these algal blooms are a result of nutrient loading to Willow Creek Reservoir. Tributaries and the groundwater supply have been characterized individually to identify the streams with highest concentrations of nutrients entering the reservoir. With this information, resource managers will be able to develop individual management plans for each stream.

4. Share results with the public & provide guidance for managing cyanobacteria in the reservoir: We are compiling the data we have collected and will share our results with a wide audience interested in better managing cyanobacteria blooms, as this is an issue that impacts lakes across the world. Information will be shared via websites, signage, public meetings, and published scientific reports.

Data collection began in the spring of 2012, but very few runoff samples were collected during the 2012 or 2013 seasons as a result of a general lack of runoff due to drought conditions.  In fact, many of the low-flow grab samples planned for this period were not collected because there was no water to collect in the streams.  As a result of this deficit in samples, an extra year of data collection was added to the study, and the overall project timeline was extended to 2015.  As a result, a comprehensive report for the project is ongoing.  Nonetheless, a considerable amount of data were collected and compiled for this data report:

A water balance is being used to characterize the relative flow components of Willow Creek Reservoir using measurements of surface flows into and out of the lake, evaporative losses, and change in lake storage volume.  The remainder of the water balance is attributed to groundwater gains or losses to the lake.

Continuous monitoring of water-quality conditions in the lake was accomplished using a raft-mounted hydrologic monitoring system that collected hourly measurements.  This system was deployed during periods without ice cover from 2012‑14.  Sensors used by this system included:

Because nutrient enrichment is suspected as the primary cause behind the cyanobacteria blooms in Willow Creek Reservoir, nutrient loading to the lake will be estimated using the components of the water balance in conjunction with sampled concentration data.  Samples were collected using both grab-sampling techniques and automatic samplers.

Field parameters were measured at the time of sample collection and included:

Samples were analyzed for:

In addition, a subset of samples was analyzed for nitrogen and phosphate isotopes in the hopes of identifying likely nutrient sources to Willow Creek.

Meteorologic factors such as wind speed and temperature were expected to play a role in the mixing characteristics, evaporative losses, and algal community of Willow Creek Reservoir. In August 2012, wind speed, wind direction, and photosynthetically-active radiation began to be measured every 30 minutes.  In April 2013, solar radiation, air temperature, and relative humidity were added.