High concentrations of phosphorus (P) and nitrogen (N) are responsible for excessive, or nuisance algal blooms in many ecosystems world-wide, and climate change is predicted to exacerbate the problem1,2. Excessive nutrients supplied to the nearshore zone of Lake Tahoe may have significant consequences to ecological communities, water clarity, and water quality. The nearshore zone represents the interface between the surrounding watershed and into the lake to about a depth of 30 meters3. Recent changes in periphyton biomass in this zone may indicate changes in nutrient supply from human sources. Therefore, management actions that serve to limit external contributions of nutrients to the watershed will become even more important to Lake Tahoe in the future.

In oligotrophic lakes, such as Lake Tahoe, excessive N and P degrade water quality by stimulating algal growth.The USGS recently evaluated seasonal trends in periphyton biomass, along with Ward Creek nutrient loads, and other physical and chemical explanatory variables measured in the Lake Tahoe nearshore area4. Findings from this study indicate groundwater contributions of nutrients to the nearshore are significant and contribute to development of algal biomass. The proximity of recharge from streamflow can also control the timing of nutrient and groundwater flux which trigger the algal growth response. At the Pineland site, significant correlation between lake and groundwater N and dissolved phosphorus (DP) concentrations indicate nutrient-rich groundwater seeping into the nearshore area. The timing of nutrient discharge and response of periphyton along the nearshore near the mouth of Ward Creek is related to early winter runoff following a period of low-flow conditions. Further from the influence of Ward Creek, nutrient discharge at Pineland is relatively constant, and the rate is controlled more by diffuse recharge and hydraulic gradient between lake level and nearshore groundwater.

A multi-isotopic analysis of δ15N, δ34S, δ13C in periphyton is necessary to account for changes associated with possible isotopic fractionation caused by nitrate or sulfate reduction occurring in groundwater. Isotopic fractionation is a natural process that is the result of bacterial nitrate and/or sulfate reduction enriching the δ15N signatures and/or depleting δ34S signatures. For example, transformations of N in groundwater caused by denitrification and ammonia volatilization can result in isotopic fractionation preferentially retaining the heavier stable isotope. Thus, the changes detected in the δ15N and δ34S signature can be used to demonstrate whether the groundwater has been subjected to reduced conditions, which would enrich the isotopic composition from the original source contribution9. Through the examination of all three isotopes, we can more clearly distinguish the change in isotopic values associated with anthropogenic sources of nutrients rather than changes associated with fractionation caused by bacterial reduction.

δ13C and δ34S in periphyton can also be used to identify anthropogenic sources such as sewage effluent and fertilizer input that are distinct from natural sources10. The use of δ13C and δ34S is therefore important for distinguishing different sources coming from the groundwater and potentially distinguishing chemical reduction that may be occurring within the aquifer.

This work will interpret stable isotope data to answer the following questions:

Question 1: What are the sources of N and P in groundwater?

Elevated concentrations of N and P in groundwater will be related to anthropogenic enrichment from fertilizer and effluent; however, seasonal variations in hydrological processes may contribute natural sources to groundwater and periphyton at various times. Nutrient transport to the nearshore environment is dependent on physical drivers within the watershed that are temporally and spatially variable. Studies have shown that N and P concentrations in Lake Tahoe streams are typically greatest during first flush events where runoff from the landscape, channel, and urban areas contribute to increased nutrient concentrations in the lake 11, 12, 13, 14. Precipitation and recharge within the landscape mobilize natural N and P from forest soils, leaf litter and alders10. Nutrient inputs from recharge also increase concentrations in groundwater and stimulate periphyton growth along the nearshore 12, 4, 14. Thus, characterizing the relative contributions of nutrient sources to streams and groundwater during the first flush and later stages of snow-melt periods can be used by water resource managers to mitigate anthropogenic influences to nutrient enrichment.

Question 2: What are these sources identifiable in nearshore periphyton?

Sources identified in groundwater and periphyton will be similar where groundwater plays a role in the transport of nutrients to the nearshore. However, groundwater may not be important at every periphyton hot spot along the shore of Lake Tahoe. This study is an important first step in gathering multi-isotopic nutrient source information from both periphyton biomass and groundwater.

Research will be implemented in four tasks.

6Michalski, G. and M. Thiemens, 2006, The use of multi-isotope ratio measurements as a new and unique technique to resolve NOx transformation, transport and nitrate deposition in Lake Tahoe. Final Report Contract No. 03-317. Prepared for The California Air Resources Board and the California Environmental Agency. August 15, 2006.

7McLaughlin, K., Silvia, S., Kendall, C., H. Stuart-Williams, and A. Paytan, 2004, A precise method for the analysis of O18 of dissolved inorganic phosphate in seawater. Limnology and Oceanography: Methods. 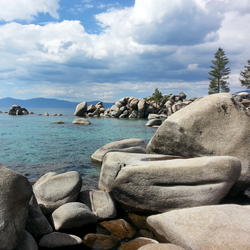 USGS Nevada Water Science Center (NVWSC) is sampling for Volitile Organic Compounds (VOCs) in 2019 in order to confirm previous data collection efforts at Lake Tahoe. The Tahoe Regional Planning Agency (TRPA) requested sampling in targeted locations and at times when petroleum constituents are most likely to be detected in the lake.
By
Nevada Water Science Center
link
June 12, 2019

USGS Nevada Water Science Center (NVWSC) is sampling for Volitile Organic Compounds (VOCs) in 2019 in order to confirm previous data collection efforts at Lake Tahoe. The Tahoe Regional Planning Agency (TRPA) requested sampling in targeted locations and at times when petroleum constituents are most likely to be detected in the lake.
Learn More
link 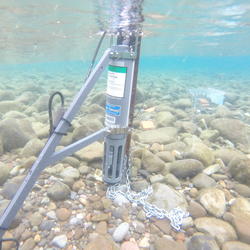 Periphyton, a type of algae, is growing on bottom sediment and rocks along nearshore areas of Lake Tahoe. Periphyton is seen as a nuisance and negatively impacts the recreational value of the lake. Periphyton biomass (PB) data collected along the nearshore of Lake Tahoe exhibit increasing trends over the last decade. However, the mechanisms that have caused these changes are not well understood.
By
Nevada Water Science Center
link
December 18, 2017

Periphyton, a type of algae, is growing on bottom sediment and rocks along nearshore areas of Lake Tahoe. Periphyton is seen as a nuisance and negatively impacts the recreational value of the lake. Periphyton biomass (PB) data collected along the nearshore of Lake Tahoe exhibit increasing trends over the last decade. However, the mechanisms that have caused these changes are not well understood.
Learn More
link

Periphyton is important to lake ecosystems, contributing to primary production, nutrient cycling, and benthic metabolism. Increases in periphyton growth in lakes can be indicative of changes in water quality, shifts in ecosystem structure, and increases in nutrient fluxes. In oligotrophic lakes, conservationists are interested in characterizing the influence of hydrological drivers on excessive pe
By
Water Resources, Nevada Water Science Center
January 25, 2017

Inorganic forms of nitrogen and phosphorous impact freshwater lakes by stimulating primary production and affecting water quality and ecosystem health. Communities around the world are motivated to sustain and restore freshwater resources and are interested in processes controlling nutrient inputs. We studied the environment where streams flow into lakes, referred to as the stream-lake interface (
By
Water Resources
March 24, 2016

The terminus of a stream flowing into a larger river, pond, lake, or reservoir is referred to as the stream-mouth reach or simply the stream mouth. The terminus is often characterized by rapidly changing thermal and hydraulic conditions that result in abrupt shifts in surface water/groundwater (sw/gw) exchange patterns, creating the potential for unique biogeochemical processes and ecosystems. Wor
By
Water Resources