Most streams and lakes on Long Island are hydraulically connected with the shallow groundwater system, and provide a window to the overall health of the underlying aquifer system. These water bodies are usually the first to show changes in the underlying aquifer, so there needs to be a consistent dataset of hydrologic data available for water managers and scientist to use to assess long- and short-term changes that may indicate potential environmental and wetlands health issues or underlying groundwater-resource concerns.

The USGS has operated a surface-water monitoring network on Long since the early 1930’s. This network of USGS stream and lake monitoring stations provides data to support hydrologic-related issues such as water-supply management, flood and drought monitoring, urban-development and resiliency planning, bridge, road, and culvert design, landuse and climate change studies, nutrient loading and habitat assessments, and recreation use.

The current USGS surface-water monitoring network encompasses data collection from approximately 55 streams and 2 lakes throughout Long Island (fig. 1). Data from this network are collected in varying frequencies to supply our cooperators, stakeholders, and the public with mission critical information on wetlands and aquifer health.

The USGS collects surface-water data needed by Federal, State, and local agencies for water-resource management, engineering projects, and regulatory programs throughout the region. All project data are served online through the USGS National Water Information System: Web Interface (NWISWeb) and other online systems, where data or hydrographs from monitoring stations can be displayed or downloaded as needed.

Related Studies and Other Information

In addition to basic hydrologic-data collection, the USGS conducts hydrologic studies that address a wide variety of water-resources issues, including water supply, contamination, nutrient loading, effects of land use on water quality and quantity, and other basic hydrologic research. A list of some related USGS studies and other useful information can be found below.

The USGS publishes water-information reports on many topics and in many formats such as scientific and technical articles and reports, fact sheets, pamphlets, and posters resulting from the research performed by our scientists and partners. A list of selected publications related to the USGS Long Island surface-water monitoring program can be found below.

Seaburn, G.E., 1970, Preliminary analysis of rate of movement of storm runoff through the zone of aeration beneath a recharge basin on Long Island, New York: U.S. Geological Survey Professional Paper 700-B, p. B196-B198. 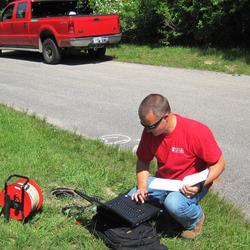 The U.S. Geological Survey (USGS) is a science organization that provides impartial information on the health of our ecosystems and environment, the natural hazards that threaten us, the natural resources we rely on, the impacts of climate and land-use change, and the core science systems that help us provide timely, relevant, and usable information.
By
New York Water Science Center
link
November 1, 2017

The U.S. Geological Survey (USGS) is a science organization that provides impartial information on the health of our ecosystems and environment, the natural hazards that threaten us, the natural resources we rely on, the impacts of climate and land-use change, and the core science systems that help us provide timely, relevant, and usable information.
Learn More
link 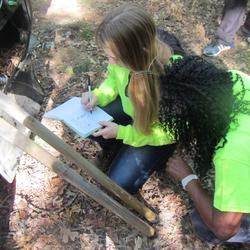 USGS Water Watch displays maps, graphs, and tables describing real-time, recent, and past streamflow conditions for the United States. The real-time information generally is updated on an hourly basis. WaterWatch provides streamgage-based maps that show the location of more than 3,000 long-term (30 years or more) USGS streamgages.

Below are publications associated with this project. Additional publications not listed here are provided in the “Publications and Studies” Section of the “Overview” page.

The techniques and standards for making discharge measurements at streamflow gaging stations are described in this publication. The vertical axis rotating-element current meter, principally the Price current meter, has been traditionally used for most measurements of discharge; however, advancements in acoustic technology have led to important developments in the use of acoustic Doppler current pr
By
Water Resources, Groundwater and Streamflow Information Program
January 6, 2020

Stream and reservoir stage are critical parameters in the computation of stream discharge and reservoir volume, respectively. In addition, a record of stream stage is useful in the design of structures that may be affected by stream elevation, as well as for the planning for various uses of flood plains. This report describes equipment and methodology for the observation, sensing, and recording of
By
Water Resources, Groundwater and Streamflow Information Program
October 5, 2016

This Fact Sheet is one in a series that highlights information or recent research findings from the USGS National Streamflow Information Program (NSIP). The investigations and scientific results reported in this series require a nationally consistent streamgaging network with stable long-term monitoring sites and a rigorous program of data, quality assurance, management, archiving, and synthesis.
By
Water Resources
January 1, 2005

Effects of Urban Development on Floods

By 1990, sanitary sewers in Nassau County Sewage Disposal Districts 2 and 3 and Suffolk County Southwest Sewer District will discharge to the ocean 140 cu ft of water per second that would otherwise be returned to the groundwater system through septic tanks and similar systems. To evaluate the effects of this loss on groundwater levels and streamflow, the U.S. Geological Survey developed a groundw
January 1, 1994

The study described in this report is concerned with the effects of intensive urban development on direct runoff to East Meadow Brook, a southward-flowing stream in central Nassau County, N.Y., during the period 1937-66. The specific objectives of the study were (a) to relate indices of urban development to increases in the volume of annual direct runoff to the stream; (b) to compare hydrograph fe
January 1, 1994

Stream simulation in an analog model of the ground-water system on Long Island, New York

The stream circuits of an electric analog model of the ground-water system of Long Island were modified to more accurately represent the relationahip between streamflow and ground-water levels. Assumptions for use of the revised circuits are (1) that streams are strictly gaining, and (2) that ground-water seepage into the streams is proportional to the difference between streambed elevation and th
January 1, 1994

Base flow of streams on Long Island, New York

On Long Island, base flow under nonurbanized conditions constitutes 90 to 95% of total stream discharge. Base-flow data from 19 continuously gaged streams are presented as monthly mean and annual mean discharge for water years 1960-75, which includes the 1962-66 drought. The data were derived by hydrograph-separation procedures that isolate mean daily base flow from mean daily discharge. A close e