About 1 billion pounds of conventional pesticides are used each year in the United States to control weeds, insects, and other pests. The use of pesticides has resulted in a range of benefits, including increased food production and reduction of insect-borne disease, but also raises questions about possible adverse effects on the environment, including water quality. The National Water Quality Program assessment of pesticides provides the most comprehensive national-scale analysis to date of pesticide occurrence and concentrations in streams and groundwater.

Hundreds of millions of pounds of pesticides are applied to agricultural crops every year to control weeds, insect infestations, plant diseases, and other pests. 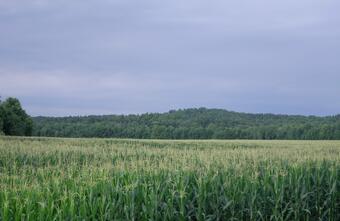 Pesticides are important to crop management because they contribute to increased crop yields and improve the quality of crops. Pesticides applied to crops and soil, however, can be transported to surface water and groundwater, where they can degrade water quality. Pesticide concentrations in streams vary widely across the United States and are influenced by many factors, such as the amount and timing of pesticide applications and the soils, climate, and hydrology where they are applied (Gilliom and others, 2006).

The pesticide-use maps provided on Pesticide National Synthesis Project website show the geographic distribution of estimated pesticide use on agricultural land in the conterminous United States for numerous pesticides. Maps were created by allocating county-level use estimates to agricultural land within each county. A graph accompanies each map, which shows annual national use by major crop for the mapped pesticide for each year during the period. These pesticide use estimates are suitable for evaluating national and regional patterns and trends of annual pesticide use. The reliability of estimates, however, generally decreases with scale and these maps are not intended for detailed evaluations, such as within or between specific individual counties.

Assessment and management of pesticides require far more information than we can afford to directly measure for all the places, times, and pesticides of interest. In addition, many decisions, such as setting monitoring priorities, approving registration of a new pesticide, and determining how much to spend on a management strategy, inherently depend on predicting the potential effects of pesticides on water quality for locations or amounts of use that have never been directly assessed. In these situations, statistical models and other types of models are used for predicting water-quality conditions at unmonitored locations under a range of possible circumstances.

Watershed Regressions for Pesticides (WARP) is an online mapper that predicts the concentrations of 108 pesticides in the U.S. for 5 years. The mapping tool can be zoomed into local stream reaches and also predicts the probability of stream reaches exceeding human health and aquatic life benchmarks.

A major challenge when assessing the water quality of streams is to link contaminant data to effects on aquatic biota, particularly for pesticides, which tend to occur in streams as complex mixtures with strong seasonal and geographic patterns. The most common way of directly assessing potential effects of pesticides is through the use of standardized laboratory toxicity tests that expose a single species to a single pesticide over a range of concentrations for a specified period of time. Comparison of such toxicity test results among pesticides (or for a pesticide among test organisms) indicates the relative toxicity of these pesticides (or the relative toxicity of that pesticide to these test organisms) under standardized test conditions, but doesn't address many factors that are important in extrapolating to field conditions. Such factors include the dose–response relationship; mode(s) of action; endpoints selected; environmental factors (such as organic carbon, pH, and temperature); and potential for additive or interactive effects of contaminant mixtures.

Pesticide mixtures are common in streams with agricultural or urban influence in the watershed. The Pesticide Toxicity Index (PTI) is a screening tool to assess potential aquatic toxicity of complex pesticide mixtures by combining measures of pesticide exposure and acute toxicity in an additive toxic-unit model. The PTI is determined separately for fish, cladocerans, and benthic invertebrates. A WARP-PTI model was used to predict PTI in streams of the Midwest in 2013.

The occurrence of pesticide mixtures is common in stream waters of the United States, and the impact of multiple compounds on aquatic organisms is not well understood. Watershed Regressions for Pesticides (WARP) models were developed to predict Pesticide Toxicity Index (PTI) values in unmonitored streams in the Midwest and are referred to as WARP-PTI models. The PTI is a tool for assessing the rel
By
Water Resources, Ohio-Kentucky-Indiana Water Science Center, California Water Science Center
April 1, 2014

Pesticide mixtures are common in streams with agricultural or urban influence in the watershed. The Pesticide Toxicity Index (PTI) is a screening tool to assess potential aquatic toxicity of complex pesticide mixtures by combining measures of pesticide exposure and acute toxicity in an additive toxic-unit model. The PTI is determined separately for fish, cladocerans, and benthic invertebrates. Thi
By
Water Resources, California Water Science Center
April 15, 2013

Estimation of annual agricultural pesticide use for counties of the conterminous United States, 1992-2009

A method was developed to calculate annual county level pesticide use for selected herbicides, insecticides, and fungicides applied to agricultural crops grown in the conterminous United States from 1992 through 2009. Pesticide-use data compiled by proprietary surveys of farm operations located within Crop Reporting Districts were used in conjunction with annual harvested-crop acreage reported by
By
Water Resources, California Water Science Center
March 5, 2006

This report is one of a series of publications, The Quality of Our Nation's Waters, that describe major findings of the NAWQA Program on water-quality issues of regional and national concern. This report presents evaluations of pesticides in streams and ground water based on findings for the first decadal cycle of NAWQA. 'Pesticides in the Nation's Streams and Ground Water, 1992-2001' greatly expa
By
Water Resources, Ohio-Kentucky-Indiana Water Science Center