Life of a Tsunami

Life of a Tsunami

Earthquakes are commonly associated with ground shaking that is a result of elastic waves traveling through the solid earth.

However, near the source of submarine earthquakes, the seafloor is "permanently" uplifted and down-dropped, pushing the entire water column up and down. The potential energy that results from pushing water above mean sea level is then transferred to horizontal propagation of the tsunami wave (kinetic energy). For the case shown above, the earthquake rupture occurred at the base of the continental slope in relatively deep water. Situations can also arise where the earthquake rupture occurs beneath the continental shelf in much shallower water.

Note: In the figure, the waves are greatly exaggerated compared to water depth. In the open ocean, the waves are at most several meters high spread over many tens to hundreds of kilometers in length.

Within several minutes of the earthquake, the initial tsunami (Panel 1) is split into a tsunami that travels out to the deep ocean (distant tsunami) and another tsunami that travels towards the nearby coast (local tsunami). The height above mean sea level of the two oppositely traveling tsunamis is approximately half that of the original tsunami (Panel 1). (This is somewhat modified in three dimensions, but the same idea holds.) The speed at which both tsunamis travel varies as the square root of the water depth. Therefore, the deep-ocean tsunami travels faster than the local tsunami near shore.

Several things happen as the local tsunami travels over the continental slope. Most obvious is that the amplitude increases. In addition, the wavelength decreases. This results in steepening of the leading wave--an important control of wave runup at the coast (next panel). Note that the first part of the wave reaching the local shore is a trough, which will appear as the sea receeding far from shore. This is a common natural warning sign for tsunamis. Note also that the deep ocean tsunami has traveled much farther than the local tsunami because of the higher propagation speed. As the deep ocean tsunami approaches a distant shore, amplification and shortening of the wave will occur, just as with the local tsunami shown above.

Tsunami runup occurs when a peak in the tsunami wave travels from the near-shore region onto shore. Runup is a measurement of the height of the water onshore observed above a reference sea level.

Except for the largest tsunamis, such as the 2004 Indian Ocean event, most tsunamis do not result in giant breaking waves (like normal surf waves at the beach that curl over as they approach shore). Rather, they come in much like very strong and fast-moving tides (i.e., strong surges and rapid changes in sea level). Much of the damage inflicted by tsunamis is caused by strong currents and floating debris. The small number of tsunamis that do break often form vertical walls of turbulent water called bores. Tsunamis will often travel much farther inland than normal waves.

Do tsunamis stop once on land? No! After runup, part of the tsunami energy is reflected back to the open ocean and scattered by sharp variations in the coastline. In addition, a tsunami can generate a particular type of coastal trapped wave called an edge wave. Edge waves travel back-and forth, parallel to shore. This results in many arrivals of the tsunami at a particular point on the coast rather than an arrival as a single wave. Because of the complicated behavior of tsunami waves near the coast, the first amplitude and surge (runup) of a tsunami is often not the largest, emphasizing the importance of not returning to a beach many hours after a tsunami initially hits.

To illustrate this phenomenon, the simulations below show tsunami wave behavior along the northern California coastline. For visualization purposes, tsunami wave amplitudes are exaggerated and 2.5 hours of elapse time has been compressed into 30 seconds of animation time.

Resonance within harbors and estuaries is not shown in these simulations, but it is another important aspect that contributes to the persistence of tsunami waves.

Note: these animations might take a moment to load, depending on your internet speed. If they do not play immediately upon clicking the play button, please give them some time to load.

The simulations below show tsunami wave behavior long the central California coastline. For visualization purposes, tsunami wave amplitudes are exaggerated and 70 minutes of elapse time has been compressed into 20 seconds of animation time.

Below are our featured “USGS Tsunami and Earthquake Research” pages. 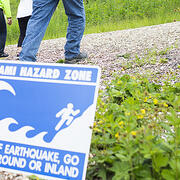 Could It Happen Here?

The Question: Soon after the devastating tsunamis in the Indian Ocean on December 26, 2004 and in Japan on March 11, 2011, many people have asked, "Could such a tsunami happen in the United States?"

Could It Happen Here?

The Question: Soon after the devastating tsunamis in the Indian Ocean on December 26, 2004 and in Japan on March 11, 2011, many people have asked, "Could such a tsunami happen in the United States?"